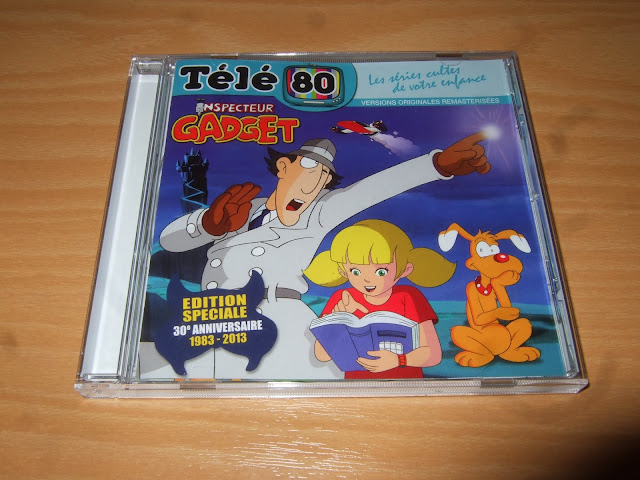 Télé 80's revised Inspector Gadget CD is in many ways a remarkable soundtrack release. It is the most complete collection so far published of Shuki Levy and Haim Saban's score, containing all the compositions officially known to survive today, which were originally released on multiple vinyls and cassettes during the 80s. I do have a few nits to pick with the CD (which I'll get back to later), but overall, this is well worth the money of any fan. 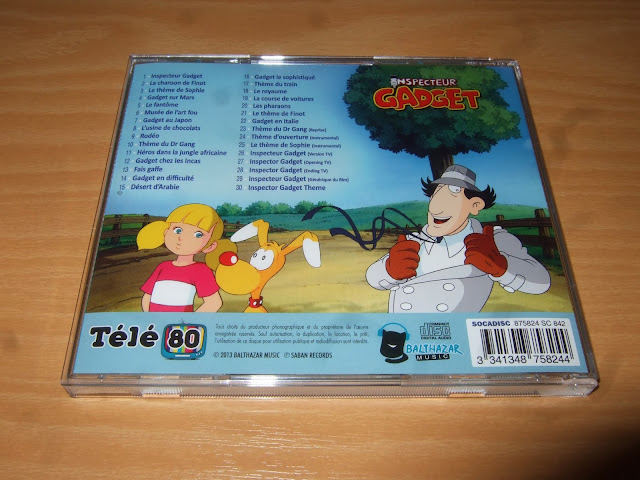 To start with my first impressions, the edition is very nicely designed. The cover illustrations may not be original, but who cares... they're the finest to ever grace a soundtrack release for this series. And the disc itself (below) is fittingly rendered in the style of a 45 rpm vinyl, with the show's colorful logo contrasting the black, white and blue. (The logo's coloring is one thing Télé 80 changed from earlier previews, for the better in my opinion.) 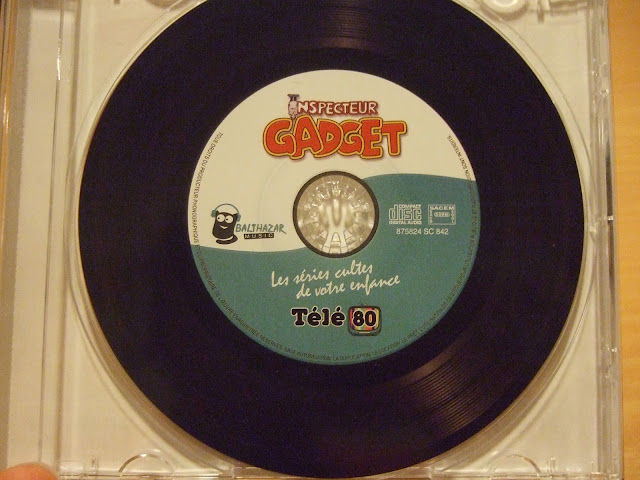 I've seen a few online commenters wishing that this "special edition" would contain some actual "special features", like a booklet with background information. I would love to see something like that myself, but let's face it: The main reason this disc is called a 'special edition' is really to separate it from Télé 80's first, lackluster Gadget CD from May 2012 (which was just called "Inspecteur Gadget"). This new CD is special in that it contains more music than any earlier soundtrack collection, but aside from that detail, it's simply a perfectly normal, good-quality CD.

But just that is not bad at all. The music is the most important thing, and almost all of it sounds terrific. If you have only heard these tracks as the fan-ripped MP3s which have been circulating on the web for years, you owe it to yourself to pick up this disc. Speaking for myself, I had never heard tracks like "Gadget in Japan", "Gadget on Mars", "Arabian Desert" etc. in such great, clear quality before. Actually, nearly all of the tracks have great quality but those were some of the standouts for me, as I had only experienced fan-ripped versions of them (from the French Saban LP) earlier.

After listening and re-listening through the disc, I must admit I'm no longer so sure about my previous theory - presented in detail in this post - that 16 of the tracks are sourced from ABC Music's master tapes for the older Australian LP and CD (from 1986 and 1995, respectively). Mainly, I'm beginning to doubt that theory because two tracks sound slightly different from both ABC's Australian collections and Saban's earlier French collections. "Mad Art Museum" and "Rodeo" (tracks 6 and 9) actually play a few seconds longer than I've heard them play before. The extra run time doesn't add much - just more repetitions of the music as it fades out - but still, the difference is there.

In addition, there is the aforementioned stereo difference in one track that was also on ABC's Australian releases: "Gadget Closing", or "Inspector Gadget (Ending TV)" as it's called on Télé 80's CD (track 28). The theme sounds almost completely alike on ABC's and Télé 80's editions, except that the stereo in the opening and closing is jumping around more in Télé 80's version. Where exactly do these nuance differences come from?

Maybe part of the anwer can be found in a Facebook comment written by Télé 80 on October 13, where they state that Shuki Levy himself provided the master tapes for their new CD. ("Masters fournis par Shuky Levi himself.") Judging by that comment, it would appear that Shuki Levy has actually preserved the master tapes for one or more of his original Gadget LPs from the 80s. (I'm still not sure if it means that ALL 30 tracks on Télé 80's CD are sourced from masters. I felt like I could hear some very slight noise on a few tracks, which I'm wondering might indicate that those tracks were remastered from vinyls.) Whatever the case, an alternate source for master tapes than what I first thought might go some way towards explaining the various small differences.

For me personally, the most interesting part of the CD comes towards the end, simply because some of those tracks are so rare. I've already talked about rarities like the instrumental theme for Brain and the alternate Mad's Theme, but I do want to put the spotlight once more on the following: Track 27, "Inspector Gadget (Opening TV)", gives us the English-language opening theme in true stereo, something I've hoped to see for the longest time, and which i believe no official release has ever done before. It sounds very good. And track 29, "Inspecteur Gadget (generique du film)", is a fun - and strange - theme song which I had never heard before at all. Sourced from this Saban single, it's a version of the French theme that was made for the French-released film "Les dossiers secrets de l'inspecteur Gadget" (1987), where three season 2 episodes were combined to make a theatrical feature. This version has a very different voice than the usual one by Jaques Cardona... much more nasal and kind of sounding like an exaggerated cartoon voice. As a little-known part of Saban's Gadget history (so little-known that the singer is unknown, according to Télé 80), this is a welcome addition.

Unfortunately, an annoying technical error also appears at the very end of the disc. Track 30, the extended English-language "Inspector Gadget Theme", is noticeably sped up from what it's supposed to sound like. The original running length of this song is 02:50, but on Télé 80's new CD it clocks in at 02:44, six seconds too short. The sound is flatter and emptier as a result of the time compression, and the stereo effects have become severely distorted, sometimes disappearing altogether. Below is an audio wave comparison of the version on the Télé 80 CD (Track 1, top) vs. the version on my Australian 1995 CD (Track 2, bottom), showing off the differences in pitch and run time. It's interesting to note how much higher the waves go in the properly pitched version from the Australian CD, which has much more prominent stereo and deeper sound throughout.

The pitch error on Télé 80's version of the track is pretty obviously a digital one. This specific theme has actually been released on CD three times before (30 years of Funtastic TV Toons, 1990; Inspector Gadget - The Music, 1995 and Inspecteur Gadget, 2012), and it sounded good on all of those editions... even on Télé 80's first "Inspecteur Gadget" CD from 2012. As such, the pitch problem would likely have been an easy fix had it been discovered in time. I noticed that, in last summer's preview of the booklet, track 30 is listed with its correct run time of 02:50. In the final, printed booklet (below), the run time has been changed to 02:44. So apparently someone "corrected" the booklet information after the CD had been produced and the pitch mistake on track 30 had been made, rather than thinking to double-check if something could have gone wrong with the digital processing. 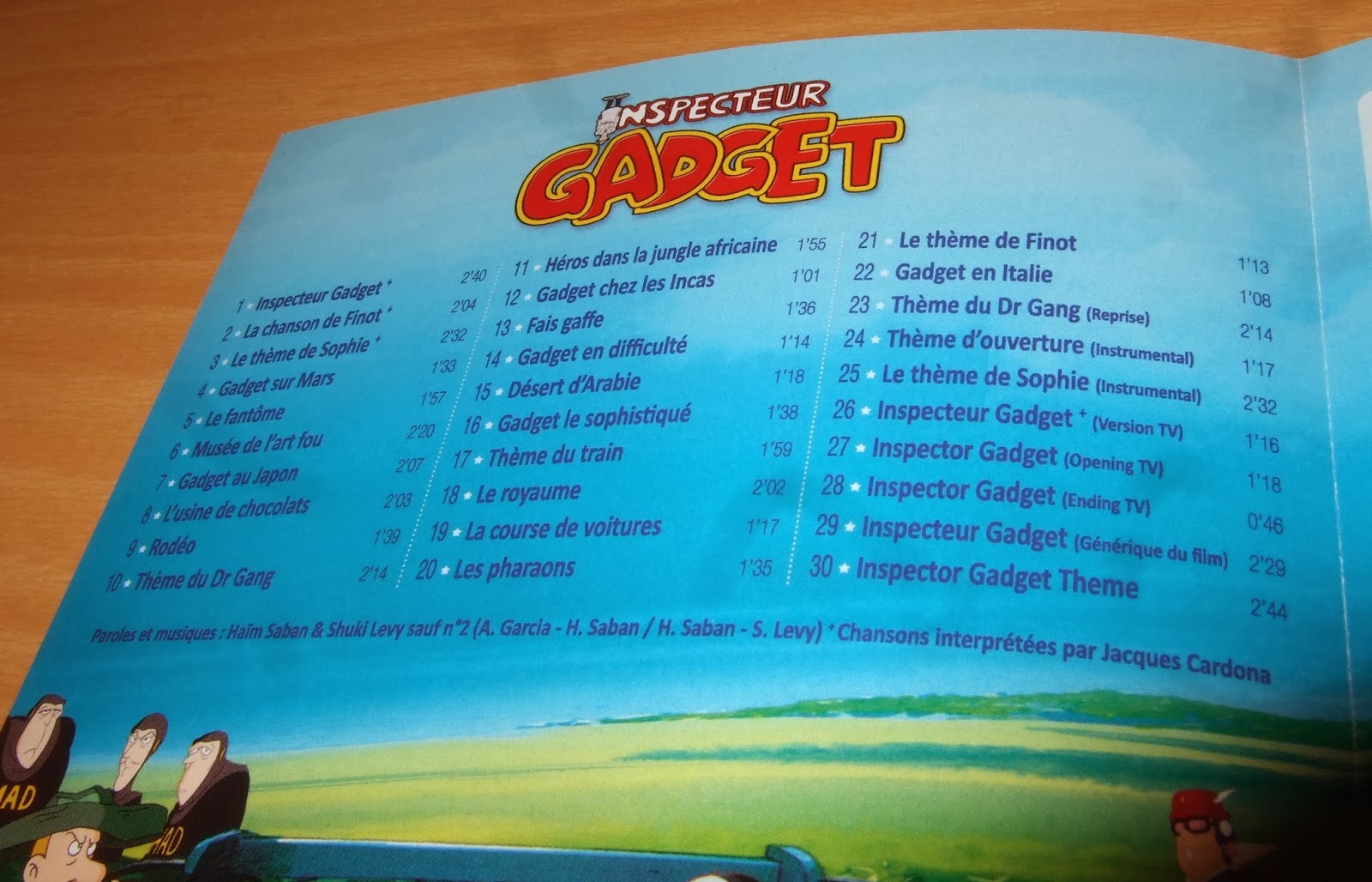 I have to say, after waiting for over a year to hold this revised CD in my hands, it was more than a little frustrating to come across an obvious error like this. Especially after I've been reporting about and advertising for the CD - and also have been mailing suggestions to Télé 80 - for so long that I sort of feel personally involved with it. And it's unfortunate as well because Télé 80's new publishing contract doesn't allow them to reprint any CDs, or release music for digital download, so I doubt they'll be able to correct this mistake.

Don't get me wrong, though. On the whole, this CD has been produced with the very best of intentions, and 99% of the time it delivers to those intentions. I know that Télé 80 worked to make a good CD this time around. They have much better quality control now than on their first few CDs, but somehow this slipup still happened. I'm describing it in detail here because it would be irresponsible not to do so... but I'd still like to point out that, ASIDE from that mistake, this is the best soundtrack release Gadget has ever had. Until the lost master material for the rest of the score is uncovered, this is likely just about the best you'll find. So my conclusion after all this is - buy it while you can.

On that note: despite the fact that the CD was printed in just a few hundred copies last fall, it's still very much available, not only on the French Amazon, but also in Germany, Great Britain, Canada, Spain, Italy and even Japan. (Yikes! What does that tell us about the number of sales so far?) Most of these Amazon sites have it in stock, and all of them sell it for a good, reasonable price. Friendly advice, by the way: Do not buy it from the two marketplace sellers on the American Amazon.com, who somehow have the nerve to demand more than 95 dollars even though the CD is cheaply available everywhere else.
Posted by Mesterius at 2:22:00 AM