Okay, I suppose this will have to be classified as 'old news', seeing as a whole month has passed since I discovered it. Yeah, that's how busy I've been lately, which is also the reason I've fallen behind with answering some of the comments here (sorry about that). But let's see if this can be the start of updating on a semi-regular basis again...

Anyhoo, the news: Approximately a month ago - on August 15, according to Google - DHX Media finally added the new Inspector Gadget series to their online distribution and show catalogues, as well as to the "New Shows" section. Remember how the reboot was called "Inspector Gadget NEW Series" in the PDF catalogue released in January? Well, for their site, DHX has found an even simpler way of separating new from old: The reboot series is listed as "Inspector Gadget 2.0". Inspector Gadget, Chapter 2. I'm sure the series' on-screen title will still just be "Inspector Gadget", but this seems to work nicely to set the reboot apart in the catalogue.


It's worth adding that the synopsis at the "2.0" show site is a condensed version of the synopsis which appeared, confusingly, at the show site for the original series back in January (disappearing again some months after that), and which was also included in DHX's January and March PDF catalogues. For comparison, here's that longer synopsis...

INSPECTOR GADGET is BACK! Dr. Claw has reactivated his global crime syndicate MAD and the bumbling Swiss army knife detective has been brought out of retirement to save the world! Tagging along with Gadget is his niece Penny and her trusty dog, Brain. Now an agent in training, Penny uses her intelligence, martial arts and high tech gear to keep her bumbling Uncle Gadget safe from harm. But it won't be easy. Dr. Claw has a secret weapon. His handsome nephew Talon is eager to learn a little old school evil as they try to take over the world.


...and here's the new "2.0" synopsis. Less information, but the shortening was obviously done to keep the presentation brief and to the point:

INSPECTOR GADGET is BACK! Dr. Claw has reactivated his global crime syndicate MAD. Only the bumbling Swiss army knife detective can stop him! With his niece, Penny and her dog Brain, Gadget must combat the sinister Dr. Claw (and his nephew TALON) who keeps trying to take over the world.


...confirming once more the series' format: 52 11-minute episodes produced as 26 half-hours. I still hope the series allows for a full-fledged, 22-minute episode once in a while if the story needs it, but I'm not sure how likely that is. We'll see.

For the sake of completion, here's also the picture being used on DHX's site. Yeah, we've seen it before in a less cropped version, but I'm noticing the color settings are brighter here. Which is clearly Very Important. And that, ladies and gentlemen, is just one reason this blog is one of the geekiest places on the internet. 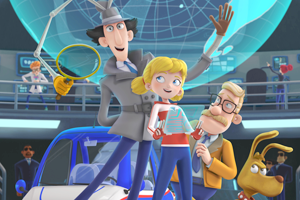