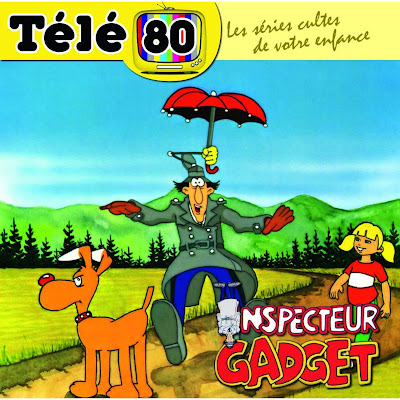 Well, parts of it, anyway. On May 21 - only 2 days from now - you will be able to own a slice of Shuki Levy and Haim Saban's Inspector Gadget soundtrack on official CD! Click here to pre-order from the production company, or here for the Amazon.fr link. This is the first time any of the background music from the show has ever seen a CD release (or a legal modern-day release at all), making the above CD sensational news.

France's XIII Bis Music Group is the company behind this soundtrack edition, which they're releasing together with several other 80s TV soundtracks under a newly created label dubbed Télé 80 (as evidenced on the above cover). The tag line next to the logo reads, "The cult series from your childhood", which basically sums up what the label sets out to do: Télé 80's business plan is to re-release on CD the original LP soundtracks of numerous famous TV shows from the 1980s... and of course score big nostalgia points by recreating the look and contents of those vintage LPs. Case in point: Their "Inspecteur Gadget" CD even reuses the admittedly clumsy-looking cover of Saban Records' 1983 LP, "Inspecteur Gadget: Bande originale de la serie TV"... with the only major difference being that the image is flipped on the CD cover. (Also, the placing of the Gadget logo was better on the original, but that's nit-picking.)

Still, as faithful as the Télé 80 edition is to its LP origins, the number of tracks on the CD has me a bit worried. Below, from Télé 80's official site, is the complete track listing (with English track titles added by me):

My big question here is this: Why so few tracks? The original 1983 French LP edition had 22 tracks, and it would definitely not have been a problem to get all of them (and probably more) into one CD. Also, let's not forget the 1986 Australian LP edition "Inspector Gadget - The Music", which featured a few unique tracks worthy of inclusion as well. Why are these not here?

Making matters even more confusing, the blog 80s-records.net actually lists 23 tracks for the CD! This blog revealed the complete track listings for the first batch of Télé 80 CDs back in the beginning of April... and here's the track info they provided for Gadget (once again with English titles added by me):

The funny thing is - while this information is probably outdated compared to Tele 80's site, the blog DID get the track listing from the official CD producers. Leading me to believe that, somewhere late in the production process of the "Inspecteur Gadget" CD, the producers suddently decided to cut half of the tracks planned for inclusion. This is especially strange as it would have made perfect sense to have all of these tracks on one CD... after all, track 1-22 are the exact tracks that were on the 1983 "Bande originale" LP. So why were they (apparently) taken out?

I sent Télé 80 a Facebook message asking how many tracks their "Inspecteur Gadget" disc REALLY contains - 12 or 23? I didn't get a clear answer, but here's what they wrote back:

"...many masters Saban burns and lost .We decide to make a CD just for Public but no for the fans , just a popular CD simple , when you find master , we are ok to make a Cd integral but the quality is very poor for this CD ...dramatic quality ...all masters lost ...thank you"

So Télé 80 didn't really answer my question... but they did point out one of the main problems of making a CD with Saban's music: the lack of master material. I'm no expert on the current situation of Saban's master recordings from the 1980s; but according to numerous forums and sites I've been visiting over the last few days, the consensus seems to be saying that the masters in most cases are either lost, rotted or burned. This means that CD producers must turn to ripping old LP editions in order to get Saban's soundtrack music in the best quality possible. So maybe - and this is just a theory - maybe the source LP that Télé 80 had for their "Inspecteur Gadget" CD was not in mint condition; and some of the tracks just didn't sound good enough to be released on CD. If this is the case, Télé 80 may have held off from releasing all the music because they want to extract the remaining tracks from a better-quality LP... and possibly release a Volume 2 later on. (Yes, I realize this is very optimistic thinking, but ALL of the available soundtrack music for Inspector Gadget deserves a proper re-release.) The last part of the official press release states that Télé 80 will launch a collection of 80 CDs in total between 2012 and 2015, so hopefully they're not done with Gadget after just this one volume.

Bottom line: It does seem that the CD contains only 12 tracks, which is certainly a disappointment. But I'll still encourage you to buy and support this release. The compositions included are all great - and it sells for less than 6 €, after all! Sure, this CD is made for the general public rather than the hard-core collector, but think about it this way: We have never before had an official CD release of the show's soundtrack; and now it happens, almost 30 years after the original LPs were available! This is why it's important to support such an initiative: If enough people buy this first CD, it definitely increases the chances of a Volume 2 with the rest of the LP music. Good enough sales may even signal to the CD publishers that there is an interest out there for a bigger, more complete soundtrack edition... and it might prompt someone in charge to start a more thorough search for surviving music masters. Wouldn't it be fantastic to finally get soundtrack music which was never even released on the LPs? (This might be reaching for the stars, considering the status of Saban's masters, but you never know... it wouldn't surprice me if the masters for at least some original Saban scores still exist in usable condition, somewhere in the world; just misplaced and hidden so thoroughly that nobody knows where to find them.)

Personally, I'm gonna buy this CD regardless of what could have been better. And then I'm gonna write to Télé 80 and make suggestions for an "Inspecteur Gadget: Volume 2" CD. I strongly suggest that everybody who wants more of this fantastic soundtrack music does the same... the more people who speak up and show their interest, the bigger the chances are of getting what we want. You can write to Télé 80 several ways: Through the "Contact" section on their site, through their Facebook profile (either as a personal message or as a wall post)... or even to the e-mail address of someone working at XIII Bis Records: smonteiro@13bisrecords.com. (According to a post on the He-Man.org forums, the guy at this address will "forward to the team who's in charge of this [the Télé 80] project".) I'm not sure which option is the best for getting heard by Télé 80, but I recommend trying them all.

Oh, that's right: In addition to all that, I can't really leave this subject without mentioning the following to all you Levy/Saban fans out there: Several of the other Télé 80 soundtracks coming out on May 21 are also collections of their music - including The Mysterious Cities of Gold, Bomber X and He-Man. (Bomber X I've never even heard of, but just seeing that Levy and Saban did the music makes me curious to check it out.) 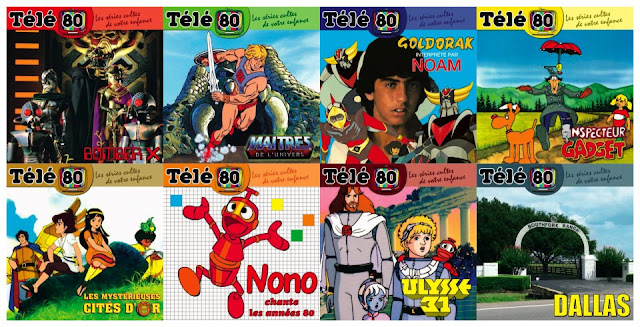 A few of these shows have gotten more complete soundtrack CDs before (for instance The Mysterious Citites of Gold), but at 5.95 € per piece, the Télé 80 discs are still a steal. Especially when it comes to "Inspecteur Gadget". So pre-order the CD right now either from XIII Bis themselves or from Amazon.fr... and don't forget to contact the producers telling them you want more!
Posted by Mesterius at 3:51:00 PM