French Book About DiC's Early Cartoons In The Making

...and it needs your support. Read on to see if this is something you're interested in: 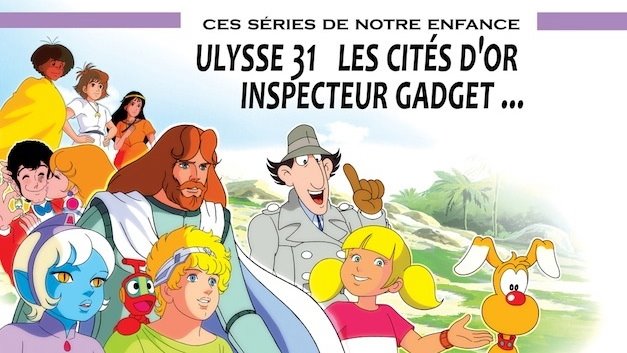 This should be exciting news for all DiC fans (especially those who speak French). I just found out that a lavish new book about the early history and TV cartoons of DiC is being prepared in France - as an internet-funded project! It will feature previously unpublished interviews and rare illustrations (ranging from cels and storyboards to vintage photos), as well as a thorough behind the scenes-look at all of the most famous cartoon series produced by the DiC studio.

The book, titled "Ces séries de notre enfance: Ulysse 31, Les cités d'or, Inspecteur Gadget..." (directly translated: These series of our childhoods), is being written by two huge DiC fans named Maroin Eluasti and Nordine Zemrak... and these writers are currently trying to raise money online in order to publish the book this October. So far, 10% of the needed funds have been collected, and they hope to have the entire amount before September 14, the day the fund-raising ends. (In case you wondered: Yes, all donations will be refunded if they don't get enough support and the book is not published.) Visit the book's official site if you want to make a donation and get cool collector's items in exchange for it, or if you just want to read more about the project. They also have a Facebook page where fans can ask questions. Below you can check out the video trailer:

The authors' presentation of the book (brough to you by Google Translate and me, as if you had to ask) sums up the whole project better than I can:

"Who has not dreamed of fighting with Ulysses 31, to help him find his way, of crossing the oceans in search of the Mysterious Cities of Gold in the company of Esteban, Zia and Tao, of fighting monster plants along with Jayce and the Wheeled Warriors? Who has not laughed at the blunders of Inspector Gadget or the jokes of Heathcliff and the Catillac Cats? These series of the 1980s have shaped our childhoods with their mysteries and humor.

Today, we offer to find them and rediscover them within a single book citing all productions of the same studio: D.I.C.

Captivated by these legendary series, we want you to discover the secrets of their production. This book will be the culmination of five years of research, documentation, interviews of all parties related to the creation of their series. We performed thus the globetrotting to gather evidence in France, the United States as well as Japan, China and Luxembourg and attempted to reconstruct the puzzle of an adventure more than thirty years old."

The book will concentrate chiefly on the period 1978-1988 - the decade which saw DiC grow from a small, French animation studio making commercials and industrial films into a major, international player in TV cartoon production. More importantly, this was the decade in which (arguably) all of DiC's most memorable cartoon shows were made. Just looking at the characters featured on the cover (and the sneak peeks next to the cover) makes me immediately interested in this book. 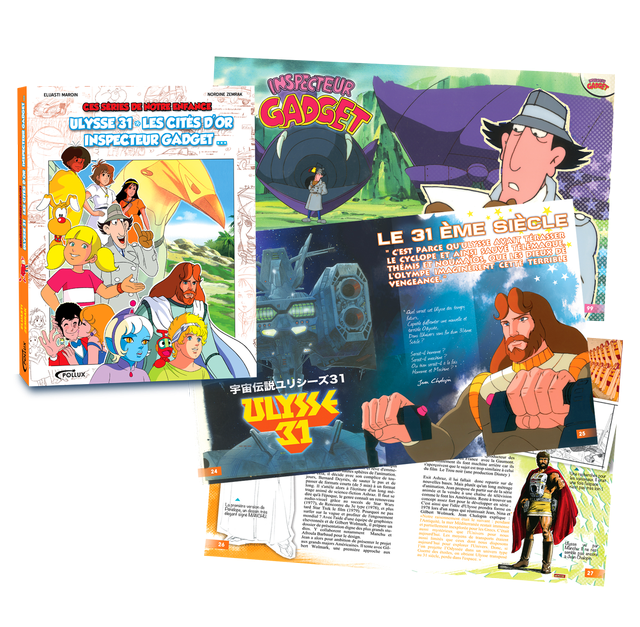 The descriptions of the book's contents makes it sound even better (translated by you-know-what and you-know-who):

"Specifically, what does it [the book] contain?

In detail, there will be:
- Interviews with Jean Chalopin, Bernard Deyriès, Bruno Bianchi, Jean Barbaud or even Michi Himeno, Shingo Araki, Mitsuru Kaneko and many others;
- Photographs of productions in Japan, the United States and Canada from 1978 to 1986;
- Photos of generic recording of Ulysses 31 in Los Angeles in 1981 with the memorable Lionel Leroy along with Haim Saban and Shuki Levy;
- Research into the design, characters and model sheets of Ulysses 31, Inspector Gadget, The Mysterious Cities of Gold, Lupin XIII, etc.;
- Numerous illustrations: cels, backgrounds, layouts, storyboards, caricatures, products..."

...and perhaps most intriguing of all, this note from co-author Maroin Eluasti about his and Zemrak's approach to writing the book:

"We can confirm that it will be very comprehensive, particularly during the period from 1978 to 1988. An attempt was made through interviews with various players to not merely make a summary of the series or to repeat what has already been seen elsewhere. We wanted to really be comprehensive (while trying not to bore you;-))

In addition, all documents of the cartoons in the book are beautiful and totally original! And finally, there will be about fifty pictures just to make a complete immersion into the years 1970/1980. In addition to other things, this is making it a book totally different to what have been done so far;-)"

This all sounds pretty fantastic. Such a History/Art Of book about the DiC studio has never existed before, and I can imagine it will uncover a wealth of interesting information and images related to not only Inspector Gadget, but also to Ulysses 31, The Mysterious Cities of Gold, Heathcliff and the Catillac Cats.....  The only downside - a rather big downside - is of course that the book almost certainly won't be published in English. However, the contents will be divided between 65% images and 35% text, so if the image part is good enough, it might still be very interesting even to fans (like me) who don't speak French. Here are a few more sneak peeks of the book's illustrations: 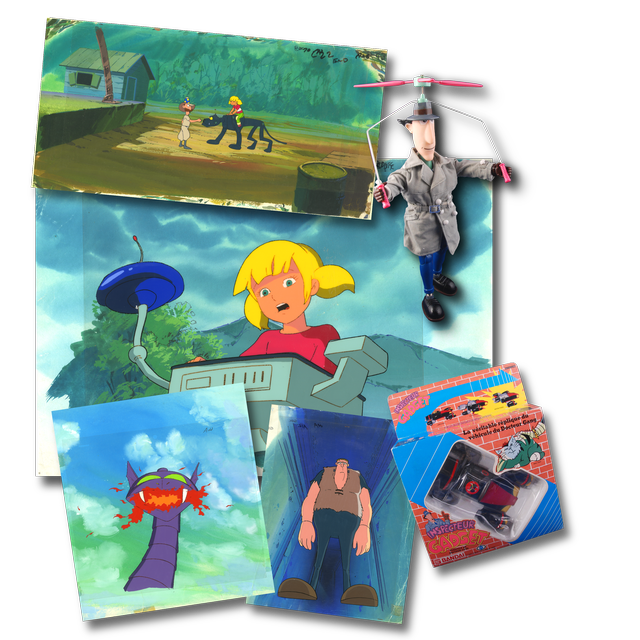 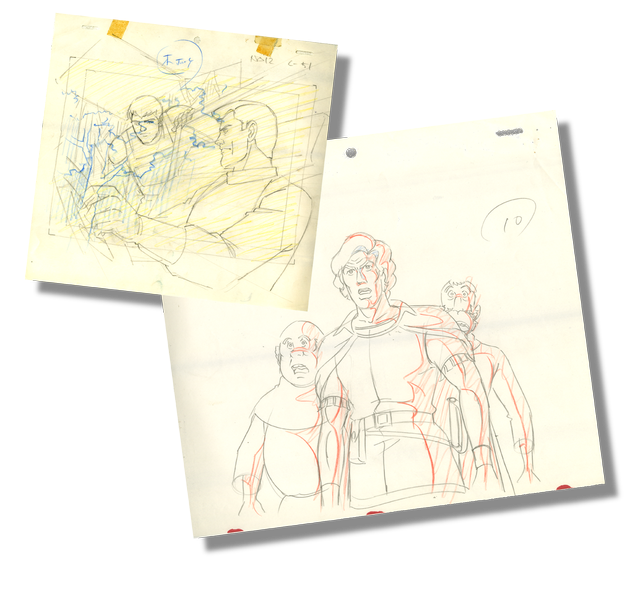 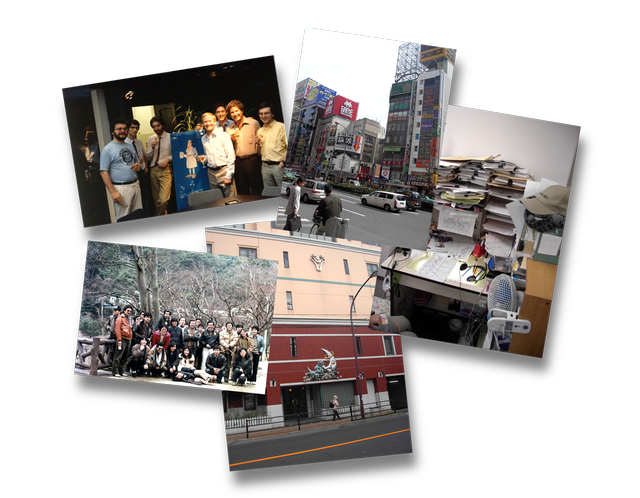 Oh, that's right: Below is an example of some of the cool stuff you can get in exchange for your donation to this project. (No, you don't have to give 250 euros, by the way; this is just an example. You can go as low as 5 euros if you want to.) Exclusive cels, storyboards, film reels etc.... all making it even more tempting to support an already good cause. As I said earlier, go straight to the book's site (fr.ulule.com/dic/) if you'd like to donate. (The site very conveniently converts the donations to your country's currency, so you can know exactly how much you're giving.) The authors hope to get the book published by October, as I said, but that release date is dependent on whether they can raise enough money in time. Every donation counts; so if you feel like contributing, do it right away and make sure to spread the word at the same time. 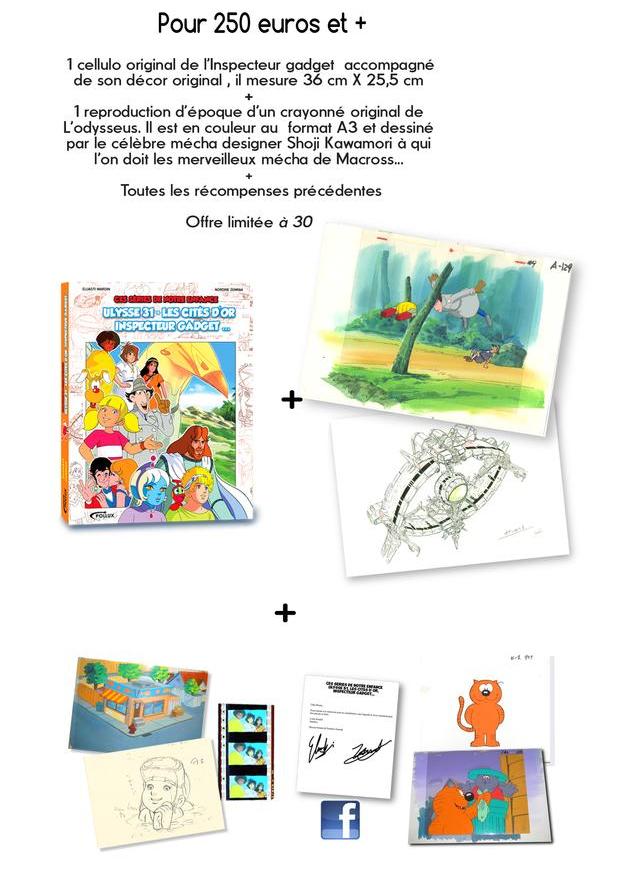