On July 12, some rather interesting news appeared on Télé 80's Facebook page. I've had no time to blog about this before now, but better late than never (especially as this will not be released until November): 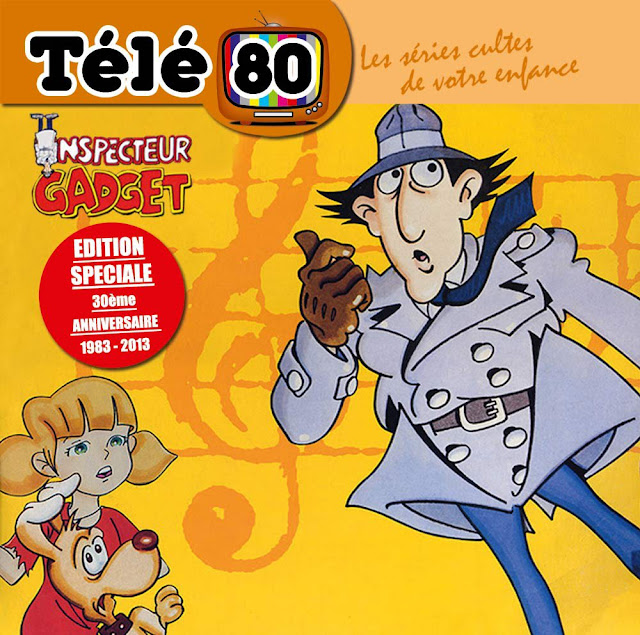 Yep, the second "Inspecteur Gadget" CD is on its way... and it gives the impression of being a bit more special than Télé 80's first lackluster edition. The Facebook post that announced this "Edition Speciale" CD has since been inexplicably deleted, but thanks to Google Cache, I can still share it with you: 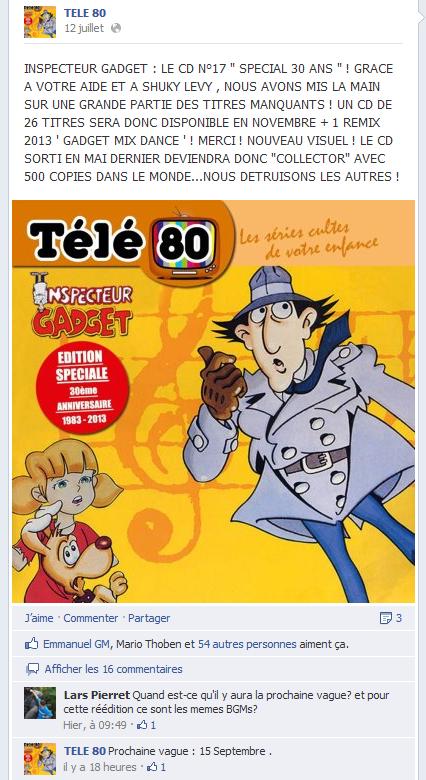 The above screen grab is a cached version of the Facebook site from July 18. When the post was deleted (on July 22 or 23, I think), it had gotten even more comments... some of them asking if one could still make suggestions for the contents of the "Special Edition" CD. Télé 80 responded with an enthusiastic yes, but then deleted the entire thread. Talk about mixed signals to the customers. This is not the first time I've seen Télé 80 delete threads from their Facebook site, and I'm still not sure why they do it.

Anyhow, let's look at the facts revealed so far. Here's the written message in French (posted here for reference, as the original Facebook post no longer exists):

...and here, with the usual aid of Google Translate and my flickering with the translation options, is what I can make out of it in English:

INSPECTOR GADGET: THE 17TH CD [in the series of Télé 80 Cds], "SPECIAL 30 YEARS"! THANKS TO YOUR HELP AND TO SHUKY LEVY, WE HAVE GOT OUR HANDS ON MUCH OF THE MISSING TITLES! A CD OF 26 TITLES WILL BE AVAILABLE IN NOVEMBER + 1 2013 REMIX 'GADGET DANCE MIX'! THANK YOU! NEW VISUAL! THE LATEST CD RELEASED IN MAY THUS BECOMES "COLLECTOR" WITH 500 COPIES AROUND THE WORLD ... WE DESTROY THE REST!


So, to sum up: In November, Télé 80 will release a special "30th anniversary edition" CD of the Inspector Gadget music by Shuki Levy and Haim Saban. This CD will include 26 original tracks as well as 1 new remix called "Gadget Dance Mix". (Unless this remix is by Shuki Levy himself, I couldn't be less interested in that part.) Presumably, the audio will be in good quality and free of vinyl scratches this time around... as Télé 80 promised much better sound quality when Volume 2 was first announced months ago. Télé 80 also mentions that the Gadget CD they released with bad sound quality in May might become a collector's item, as only 500 copies have been sold around the world at this point, and they intend to destroy the rest. Good riddance, I say. (Though I must admit that a small part of the completist in me would like to get that CD now, seeing as it is the first CD release ever of the show's original background music. Damn my collector's instincts!)

The "new" cover art looks pretty awful (awful enough for people to complain about it in disbelief at the Planete Jeunesse forums)... ironically enough because, once again, Télé 80 reproduces the art from a vintage LP cover, in this case the cover of the 1986 Australian LP "Inspector Gadget - The Music". Still, this is slightly reassuring from one perspective. The Australian record (as regular readers know by now) contains a few tracks that were not included on the 1983 French LP... and I had expressed hope earlier that Télé 80 would look at the Australian LP for their second "Inspecteur Gadget" CD, and get the unique tracks on that edition included. (I even sent them a few e-mails about this, but never got a reply.) The cover image certainly indicates that Télé 80 are at least aware of the Australian record... and the fact that this new CD includes 26 original tracks makes it very likely that some of those tracks have been collected from "Inspector Gadget - The Music" (the French LP contained 22 tracks).


I find it interesting, by the way, that Télé 80 mentions getting hold of many missing track titles "...thanks to your help and to Shuki Levy". I can understand "your help", as I'm pretty sure a number of fans have helped Télé 80 out with getting good LP copies to rip the music from. But Shuki Levy himself? Does this mean Levy personally helped Télé 80 out with good-quality copies of the original LPs, or with master tapes of his original compositions? I would guess the former, because 26 tracks are no more than what you'd get by simply combining the contents of the French and Australian soundtrack LPs.

In fact, 26 tracks are less than what you'd get if you include every single, unique track from each of those editions... and that worries me a bit. I've calculated that if Télé 80 collects everything that has ever been released of original Gadget music by Shuki Levy, they would end up with 28 tracks! Which leads me to wonder if something is being left out. Let's take a quick look at the tracks that Télé 80 could in theory release, collected from various soundtrack editions and compilations of TV themes:

The Australian 1986 LP - 5 Unique Tracks (16 in total, but many overlapping with the French LP)

The Original US Opening Theme, which has circulated on various CD compilations of television themes ever since the 1980s, and is no doubt very easy to find:


In other words: If the upcoming CD really contains 26 original tracks, it would seem that Télé 80 is leaving out 2 tracks that could have been included.... and this being a French release, it would not surprice me if these 2 leftovers prove to be American themes. I could easily picture the "Gadget Closing" theme and one of the US themes (either the Opening Theme or the extended "Inspector Gadget Theme") being taken out, as these American theme songs do sound slightly similar to one another. Still, all three of these themes are also different from one another - and all of them are unique, vintage compositions by Shuki Levy. For that reason alone, they deserve inclusion on an official soundtrack CD... especially if that CD wants to live up to the subtitle "Edition Speciale".

But maybe I'm jumping to conclusions here. As Télé 80 mentioned in a Facebook comment, the contents of the CD can still be changed and revised. For all I know, that might be why they suddenly deleted the thread announcing this news... maybe they felt that it was too early to give detailed information, considering these details might change before the release. Whatever the case, I truly hope they will include all of the US themes - or more to the point, all the compositions that have been released from Shuki Levy's original score. It would only serve to make the CD more attractive for fans around the world.
Posted by Mesterius at 8:34:00 PM