Télé 80's partner GénériKids has launched exclusive online previews - or pre-listens - of the upcoming batch of Télé 80 CDs, including the extremely-long-awaited "Inspecteur Gadget - Edition Speciale: 30e Anniversaire 1983-2013"! GénériKids also specifies that this and the other new Télé 80 CDs are limited to 500 copies only. For various reasons, I didn't get around to write about this before now... but I discovered the previews on Sunday night (or Monday morning, if you will) and listened through all 30 track extracts from the Gadget CD. Overall verdict: I think they sound great! The majority of the music comes across as clear, flawless and vibrant. Admittedly, some slight hissing can be heard on a few tracks (I suspect these are among the tracks that were remastered directly from vinyls, rather than sourced from master tapes), but this does not feel like a big distraction.

As you might notice from my comment on GénériKids' site, I had a different kind of problem with the extract of track 30, the American "Inspector Gadget Theme" (02:50, originally released on ABC's Australian soundtrack edition). Listening to the GénériKids extract on Monday morning, it actually sounded like the track was both sped up and in mono - whereas the original version is in stereo! However, GénériKids seems to have updated this track sometimes after I posted my comment: the stereo is now more noticeable, and the tempo sounds more or less correct. Even so -- comparing with the Australian album version, I do get the feeling that the GénériKids extract still plays just a little bit too fast... and the music feels emptier, somehow, than it does in the Australian release. Maybe it's just me being too nit-picky... but here, check out a YouTube upload of "Inspector Gadget Theme" and compare for yourself. If there really is some problem with the track, it might hopefully just be some technical error with the extract on the web site (GénériKids changing this specific extract after the initial publication might be an indicator of that), so I'll reserve final judgment until I hear it on the CD.

I noticed another odd detail in the extract of track 28, "Inspector Gadget (Ending TV)" ("Gadget Closing" on the original Australian edition). I'm not even sure if this is a mistake, but I'll try explaining it to you anyway: Right in the start of GénériKids' track extract, the stereo effect sounds different from the Australian-released version of the song (the Australian soundtrack is presumably where Télé 80 got this track from). In the online GénériKids extract, the second and third notes of the composition are heard in the left and right speaker, respectively - i. e. in the left and right ear if you listen to the song through a headset. However, on the Australian edition of the same song, the second and third notes were both heard more or less in the middle, as you can hear in this extract from my own copy:

So why, then, are the notes in question heard in the left and right speakers in the Générikids extract - when this extract otherwise sounds exactly like the Australian soundtrack version? Did the CD producers remix the stereo? Or is Télé 80's version from a different, original source? I will have to guess/hope the latter, just because - after all - why would the CD producers have any reason to alter the original stereo effects? For that matter, the difference doesn't make the song any less enjoyable. I'm just curious about where the difference came from.

Regardless of the above-mentioned details, I still think we're in for a very good CD edition. Almost all of the tracks sound good and many of them sound fantastic. Not to mention that - unless I'm completely mistaken when listening to track 27 - it sounds like we'll be getting the rare STEREO VERSION of "Inspector Gadget (Opening TV)", the original, American opening theme (which to my knowledge has only been released in mono on earlier CD compilations)!

In other news: Physical production of the CD was finished more than a week ago, according to an August 20 Facebook post by Télé 80. The first (very positive) review has popped up on the French site Animeland. In fact, French fans can actually order the disc right now from GénériKids' partner Génération Souvenirs, while the rest of the world will have to wait until September 30. At least we can already pre-order the CD from Amazon.fr...

UPDATE (September 17, 2013): The CD is actually not yet available from Génération Souvenirs. There has apparently been a delivery delay with all 4 new Télé 80 CDs. Télé 80 has been assuring people on Facebook that the CDs will be in stock "in a few days"... but by this point, they've been saying that for the past two weeks. Meanwhile, Priceminister claims to have the disc in stock for the French fans who want to try their luck there.

UPDATE #2 (September 22, 2013): Génération Souvenirs finally has the CD in stock, after some very unexpected delivery problems: the package originally sent to them from the production factory got lost in the mail according to a recent explanation by Télé 80. Télé 80 also mentioned that they in fact ended up printing only 300 copies of each new CD. Génération Souvenirs will ship orders from Monday onwards. 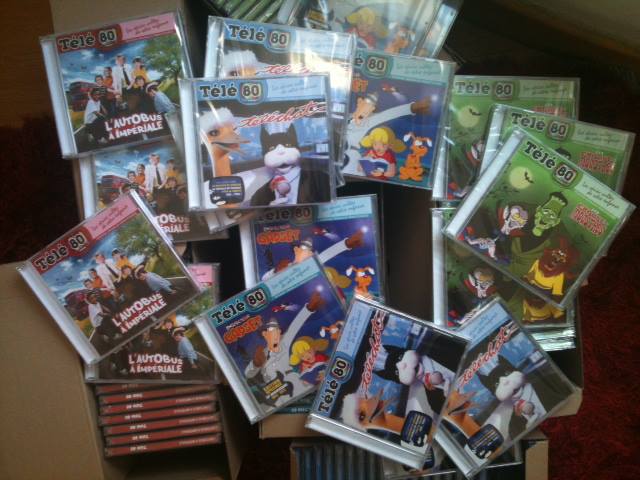