Inspector Gadget on Children's ITV (plus one Fox Kids ad)

The online TV museum TVARK has among its videos some British television spots with Inspector Gadget. Especially charming are three clips aired on Children's ITV on November 14, 1986, serving as links between the channel's programs. In them, presenter Matthew Kelly is showing off drawings of Inspector Gadget sent in by Gadget's many young fans, all the while the clock is ticking nearer towards the actual show. I can't embed the videos, but read on to get direct links to all of them.

The first clip features an introduction by Matthew Kelly as well as a full-figure drawing of Gadget by an 11-year old fan named Louise. Of course, Kelly takes the occasion to remind Louise and other viewers that today is the day of Gadget's return to the channel, at 4:25 pm! 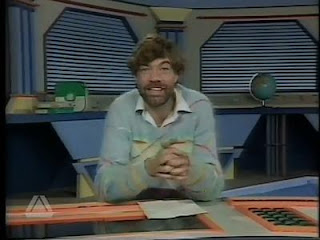 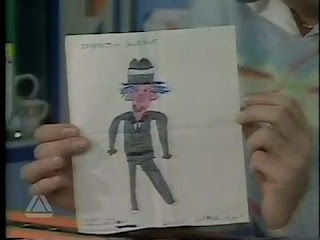 The second clip features a large drawing of Gadget's face by a fan named Georgina (you'll have to click on the video link to see that one). By this point, there's only a few minutes until 4:25 - and the presenter makes sure to point this out to Georgina with a firm message to not go away! I have to say, Matthew Kelly does know how to build up the excitement and expectations. (As well as how to make the kids sit through a commercial break - who would dare change their channel after hearing that?)

By the third clip, children glued to the TV screens could draw a sigh of relief: Kelly, after presenting two more fan drawings, finally lets them watch Inspector Gadget. I was a bit surpriced to hear him call Gadget a "brand-new series", but I'm guessing the series was brand-new to Children's ITV in 1986. (By the way,  if you're disappointed that the video cuts off just as the intro starts, here's a longer version of the clip which includes the entire intro.)

The last spot I found is completely unrelated to Children's ITV, but I might as well include it for the sake of completion. It's a 1996 ad aired on the then-new, UK Fox Kids channel, about its upcoming Comedy Club program block, where Inspector Gadget is one of the players. The presenter in this one is no match for Matthew Kelly, but you can't blame him for not being energetic.
Posted by Mesterius at 1:21:00 AM