And so it's time for the premiere in my own home country, Norway. Judging by the Scandivavian Boomerang TV guides at the Danish site TimeFor.TV, the new Inspector Gadget series will premiere this Saturday at 17:30 (or 5:30pm) in Norway, Denmark and Sweden; with two half-hour episodes airing in an hour-long slot. (I checked the TV guide's archives for the past seven days, which is why I'm quite sure March 7 is the premiere.) Here's a snapshot from the Boomerang Norway guide for Saturday, March 7, which lists the series under its Norwegian title, "Inspektør Gadget": 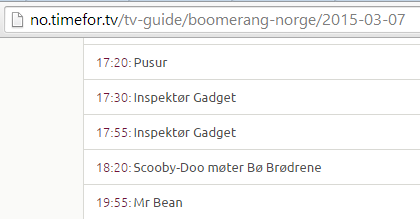 The exact same slot can be seen in the Swedish and Danish TV guides for Saturday; under the titles "Kommissarie Gadget" and "Inspector Gadget", respectively. (I couldn't find any Boomerang guides for Finland or Iceland on TimeFor.TV, though... does anyone know if those countries have separate Boomerang feeds?) It seems Saturdays and Sundays will be the series' Scandinavian air days for the time being, as no weekdays turn up in my searches. Here's Boomerang's Inspector Gadget schedule for Norway, Sweden and Denmark during the next two weekends:


Very little info seems to be available online about the Scandinavian Boomerand rebrand... and for that matter, about the programs themselves. I haven't found any TV guides listing which episodes air on the above dates, for instance, though I'll assume the episodes are presented in chronological order.

As for more general rebrand announcements, the only news piece I've spotted so far is this January 9 Danish article from tvnyt.com, which says the Danish rebrand officially started on January 17. Also, some dialogue-free Gadget videos have been up on Boomerang's Norwegian, Danish and Swedish web sites for about a month now (the same dialogue-free videos which are used on Boomerang sites in almost every country, I believe). But I'm still sure the actual, Scandinavian TV premiere of the new Inspector Gadget is this Saturday.

Any Norwegians and/or Scandinavians out there who plan on tuning in?
Posted by Mesterius at 12:30:00 AM