The New Gadget Series Comes to DVD in Australia on April 2, 2015

Here's a bit of news I hadn't expected so soon - the first home video release! 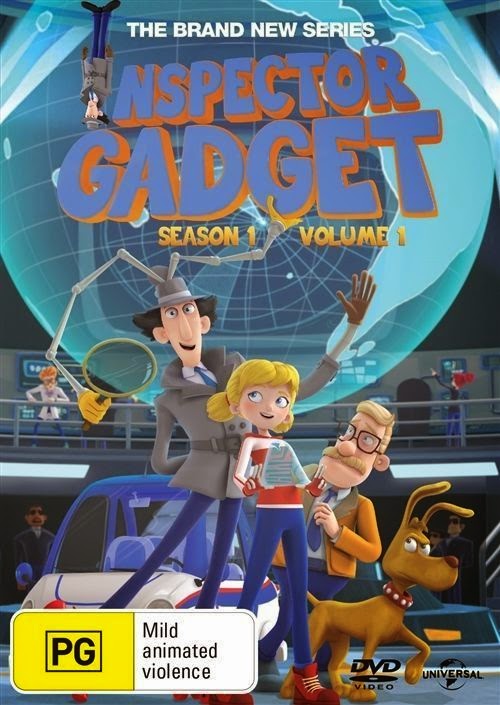 I guess this sorta makes sense considering that Australia was one of the very first countries to air the reboot series, from January 5 (only France seems to have started regular broadcast earlier). Anyway: Season 1, Volume 1 - on Region 4 PAL DVD - can currently be pre-ordered from this Ebay seller, as well as from the Australian retailer DVD Warehouse. While it doesn't say anywhere on the above cover, both the Ebay listing and DVD Warehouse includes "Inspector Gadget 2.0" in the DVD's title, probably to separate it from the 1983 series in searches.

Bizarrely enough, this release has managed to get a PG rating (Parental Guidance) for "Mild animated violence". I own several Australian DVD releases of the original Inspector Gadget series, and they have always, without exception, been rated G (General). I can't imagine that the new series contains more "animated violence" than the old show... frankly, the opposite seems more likely. (That said, the 2007 DVD release of "The Original Series - Box Set 3", from Magna Pacific, did censor select scenes in four episodes.)

The Ebay listing doesn't offer much info, though it states 1 disc as the contents. DVD Warehouse provides the full name of the distributor: Universal Sony Pictures Home Entertainment Australia. We'll probably have to wait a bit longer to find out how many episodes are included. Myself, though, I think I'll stick it out for a Blu-ray release.
Posted by Mesterius at 5:08:00 AM