Some interesting newspaper articles of late...

Ivan Sherry talks about Inspector Gadget. The article "Former Kingstonian new voice of cartoon classic" is essentially a fluff piece (not much of real depth is revealed), but it's still the first interview I've seen with Gadget's new actor. 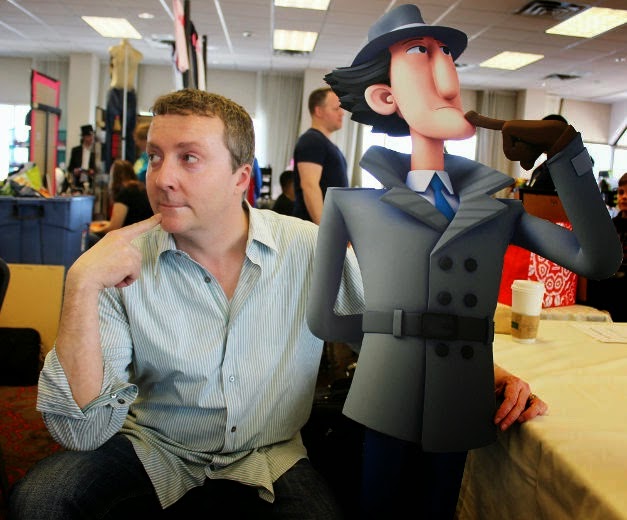 One of Sherry's quotes brings the production timeline into perspective a bit:

Sherry said all 52, 11-minute episodes have been voiced and produced.

"We finished recording them last summer," Sherry said. "Then, they animate after we've recorded. A lot of people assume it's the other way around.

"So you actually have a lot of influence over what the animators are going to draw, because you're bringing the energy, and you're making the decisions for the character based on the script, you're bringing your own take on it."


What the animators are going to "draw"? Sigh. And then there's this quote which is kinda frustrating...

"I haven't found many people who don't know the theme song (to Inspector Gadget) or they all say 'wowzers,' 'go go gadget,' everybody knows Inspector Gadget," Sherry said. "It's unbelievable, I had no idea."


...simply because that wonderful theme song which everybody knows is NOT USED in the new series. Not that Sherry is to be blamed in any way for that.

In other news: DHX Halifax, the division of DHX which produced and animated the new Gadget series, may be shut down or moved if recent changes to the film tax credit for Nova Scotia (the Canadian province of which Halifax is the capital) go through. The reasons are detailed in the linked piece "Cape Breton comedian: reduction of tax credit could see demise of N.S. film industry". As far as I can understand, though, the bottom line is this:

Over the past few years, the Canadian government has given generous, monetary support - in form of a hefty tax credit - to film and television productions which are hundred percent Canadian. This has led to many more animated productions coming to Canada than would otherwise have been the case; simply because producers can save a lot of money by having a series done there, with a wholly Canadian cast and crew, and save tax money. Now, however, this very convenient tax reduction arrangement is about to change for Nova Scotia:

...as of July 1, the film industry tax credit will only cover 25 per cent of eligible costs with the remaining 75 per cent available as a non-refundable tax credit. The credit used to be 100 per cent. A new $6-million Creative Economy Fund has been established to fill the void but it won't be available until 2016 and it will be available to a variety of creative industries, not just the film industry.

"If they go through with this cut, this government is going to leave Nova Scotia with the poorest and least attractive tax programs in North America, so that means that productions which have come here before are going to go elsewhere," said MacDonald. "And there's lots of places for them to go.

"Why would you come and make your television show or your film in Nova Scotia when you can drive up the road and make it in New Brunswick and get the proper tax credit? If they make this decision and follow through with it, as soon as they do it, just watch, everything will shut down."

The rumblings have already begun with DHX Media in Halifax suggesting they may leave the province if the changes to the tax credit go ahead. They are the producers of the "Inspector Gadget" animated series and employ more than 150 people...


The tax reduction likely goes a long way toward explaining why the new Inspector Gadget series is a 100% Canadian production. It probably even explains, to an extent, some of the new voice actor choices. As the Ivan Sherry piece mentions: "...all the [voice] talent is Canadian, and includes Tara Strong, originally from Toronto, who lives in Los Angeles, Calif." Of course, a ton of different reasons play into how and why the new actors were selected, but it does sound like they needed to be Canadian.

I wonder what will happen with DHX Halifax now that the tax situation is (seemingly) changing. If the new Gadget series is popular enough to warrant a second season, will that season be produced elsewhere?

UPDATE: I corrected some details regarding the tax credit situation pointed out by this anonymous commenter.

UPDATE #2: For those wishing to delve into the tax credit situation more, Mark Mayerson has written an interesting piece on it.
Posted by Mesterius at 12:23:00 AM