Absolutely insane news - and NOT necessarily in a good way whatsoever. I came across this through a DeviantArt journal, which links to what seems to be the first article breaking the news, and also one of the very few sources we have at the moment. But it's not April 1, and I don't see why a movie news site with the tagline "Hollywood's Insider Information" should just make this up... so I guess I'll have to report it. Via The Tracking Board, then...

The iconic cartoon character is getting another live-action film treatment

Everybody’s favorite bumbling cyborg policeman is making his return to the big screen via Lin Pictures and Disney. Dan Lin will produce the INSPECTOR GADGET reboot, which sources confirm will be another live-action interpretation of the beloved cartoon classic. The film is expected to wash away the existence of the 1999 Matthew Broderick outing, as well as the subsequent follow-up with French Stewart. Classic characters Gadget, Penny, and Brain are expected to appear, once again battling their unseen enemy, Doctor Claw. Lin Pictures’ president of production Jonathan Eirich will oversee development alongside Mark Bauch.

Inspector Gadget intitally ran from 1983 to 1986, but remained in syndication into the late ’90s. The series followed a dimwitted half-robotic policeman who could summon nearly limitless amounts of useful, and often useless, gadgets by saying “Go-Go-Gadget,” and then inserting the name of the item. Though his gadgets almost regularly malfunctioned, Gadget solved capers and crimes with his niece Penny and dog Brain in tow, often thwarting the schemes of the nefarious Doctor Claw and his diabolic agents working for the evil M.A.D. syndicate.

A live-action adaptation loosely based on the series was released by Disney in 1999, starring Matthew Broderick, Michelle Trachtenberg, and Rupert Everett. The film was generally poorly received, but still led to a straight-to-DVD sequel starring French Stewart as the titular hero. The character returned in an updated CGI-animated series, which just recently premiered in the U.S. on Netflix this past March.

I don't know what to say. In fact, right now, I have pretty much nothing to say, except I don't think it's a good sign that Disney is involved with this thing. The only good-sounding part of the press release (if it is a press release - that part feels unclear) is the sentence, "...expected to wash away the existence of the 1999 Matthew Broderick outing, as well as the subsequent follow-up with French Stewart." So much the better, obviously. Both of those movies were trainwrecks, with absolutely no respect for their source material and riddled with terrible writing, direction and acting. But is it really to be expected that the same, big Hollywood corporation - today much bigger, with all the buyouts that has taken place over the past decade - will do a more respectful and (not least) better adaptation this time around?

From what the news piece says, of course, Disney will not be doing it just by themselves this time. Dan Lin of Lin Pictures is set to be the producer, which I'm guessing might mean that his company will be handling most of the actual production, with Disney co-financing and distributing the film. That is at least my theory for the moment. But I can't say Dan Lin as a producer makes me feel more optimistic, either. The Lego Movie was wonderfully fun and entertaining, but that's clearly a testament to the film's directors, not its producers. Plus, several years ago Dan Lin was heavily involved with developing a CG/live-action movie of another cartoon series, Tom and Jerry. That whole concept sounded quite awful... and in the end, thankfully, nothing came of it (although Warner is currenty developing an all-animated feature with the cat and mouse instead).

To that end, we should remind ourselves that this new Inspector Gadget movie is only in the earliest stages of development. Any information given now is subject to change. If you check The Tracking Board's tag list for 'Inspector Gadget', you'll find a link to an "Inspector Gadget (Sales)" site which teases more information about the film; though you have to be a registered member of the site to see it. But it doesn't seem much more info is available yet anyway, judging by the sentence next to the "In Development" thumbnail picture: "Kept under wraps, but pitched as another live-action interpretation of the beloved cartoon classic about the dimwitted cyborg policeman." 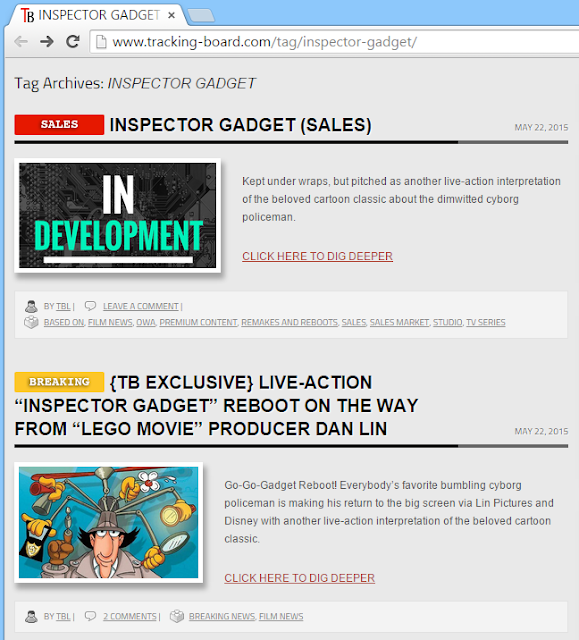 Some other sites mentioning the project are also worth noting. AceShowBiz, in addition to a May 23 piece quoting The Tracking Board, lists the film in its movie section with a tentative "2018" as the release year. I don't know if that's an assumption by AceShowBiz or sourced from the "Sales" site behind The Tracking Board's subscription wall. Meanwhile, Sci4Me has a news piece posted on the same day as The Tracking Board's article, but with partly different information. I especially found the following interesting:

While [the 1999 Disney live-action film] spawned a live-action straight-to-DVD sequel starring French Stewart, the two films weren’t as popular as hoped, and the franchise faded away. Recently, an updated CGI series premiered on Netflix, paving the way for a new version to hit the big screen.


And I'm pretty sure that last sentence is true, too. We already know that the reboot series has been doing well in ratings, so this makes sense to me. But it's interesting: very often with franchise reboots of this kind, a big-screen movie paves the way for new animated productions. It happened with Garfield, it happened with Alvin and the Chipmunks. It even happened with Gadget, 16 years ago. The (purely commercial) success of Disney's 1999 film paved the way for a new TV series, Gadget & the Gadgetinis, as well as two direct-to-video animated films.

In this case, however, it's the other way around. A new animated TV series gets made - not because of any live-action movies, but because the original show performs strongly in reruns and instant video; and a 2010 mobile game closely based on it becomes a surprice hit. Teletoon Canada, which already has the 1983 show airing around the clock on their Teletoon Retro network, orders an updated version for their main channel. Following the reboot series' global launch in early 2015, a big-screen movie enters development. The chronology of events is clear... and undoubtedly the clearest sign yet of the new TV series' success, not to mention the lasting success of the 1983 original.

ANYWAY. What matters most of all here is whether the new movie, should it get produced, will be any good. But I think its producers would do well to realize the chronology of events I just described, and realize that the cornerstone of Inspector Gadget's popularity is still, after all these years, the original 1983 series. The two Disney movies are largely forgotten today, and for good reason: they were awful. If the new live-action reboot could manage to actually be a good movie - one which works to capture the spirit and essence of the 1983 series, rather than do everything to steer away from it - Lin Pictures and Disney could have a long-term franchise hit on their hands.

Whether that will happen is impossible to say right now, and I can't say for certain how closely I'll be following this project, either. It will depend on how much it interests me... right now, not too much.

But who knows. That one sentence with "wash away" does provide a tiny glimmer of hope. Plus, there's nothing inherently wrong with the sentence immediately following: "Classic characters Gadget, Penny, and Brain are expected to appear, once again battling their unseen enemy, Doctor Claw." Good so far.

Final question: why do these Hollywood adaptations of cartoon shows always have to be live-action? Why not do an all-animated Inspector Gadget theatrical feature?
Posted by Mesterius at 5:51:00 AM

Email ThisBlogThis!Share to TwitterShare to FacebookShare to Pinterest
Tags: Live-action