Cro and Bronto Return - Now With Intro Sequence and Credits!

Stop the presses, everybody! I've found a complete and uncut episode of that awesome, classic DiC series Crô et Bronto, including its ridiculously rare intro sequence and credits!

What? You're saying you never watched Cro et Bronto before? Cro et Bronto didn't play repeatedly on your cartoon channels as you were growing up? You don't actually know what Cro et Bronto is? Son of a gun! Have YOU ever missed out!

Okay, okay, I'll calm down a little. In truth, Cro et Bronto probably isn't one of the greatest cartoons ever made. But for us Gadget and/or early DiC fans, it's interesting from an historical perspective. This mini-series about the little stone age man Cro and his obsession with catching and eating the naïve, good-natured brontosaurus Bronto was one of the very first animated productions to come out of DiC Audiovisuel. It was produced for the French channel Antenne 2, where it reportedly premiered sometimes in 1980 (more on that "reportedly" later).


I'm not sure how much Cro et Bronto was rerun after its initial airing, but it's safe to say it's been nearly impossible to watch in modern times. When I first posted about it in 2012 (right after I found out it existed), not a single clip was available on the web. My second post in 2013 was done because animation site Osibo News had finally shared one episode as part of an article about the DiC history book "Les séries de notre enfance". Annoyingly, though, Osibo's clip was missing the intro and end credits. And that's a big reason why the video I'm showcasing in this third post is by far the best to surface...

Shared by the channel VHS Cartoons back on February 25, this YouTube upload finally lets us see the intro and end credits, as well as hear the opening theme -- a very frenetic and somewhat obnoxious theme, I must add, but it does capture the series' tone. As for the episode itself... well, let's just say that the inspiration from Chuck Jones' Roadrunner cartoons is getting clearer and clearer (and so is the reuse of animation).

Watching the end credits leads me to revise some of the production details I wrote in earlier posts. My info at the time was based on Planete Jeunesse's Cro et Bronto article, which credits Bruno Bianchi and Edouard David as the series' co-directors. However, the only credit screen seen in the above episode tells us that the director is Bernard Deyriès, a long-time DiC employee who would go on to direct series like Ulysses 31, The Mysterious Cities of Gold and The Littles. (Planete Jeunesse does list Deyriès as the "Auteur", meaning the creator; but I can't remember his name being there when I used the site as a source three years ago. I certainly didn't mention him anywhere in my first post.) 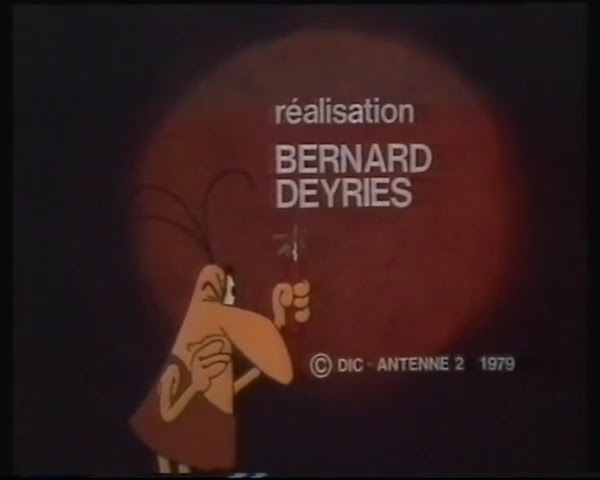 Since Planete Jeunesse's info doesn't match up with what we see on screen, let's cross-check with a different source. "Les series de notre enfance", Maroin Eluasti and Nordine Zemrak's excellent DiC history book, has a small entry on Cro et Bronto on page 18 - and I recently took the time to type that entry into Google Translate. While Eluasti and Zemrak do not mention any directors, they state that the series was "conceived by Edouard David, Bruno Bianchi and Bernard Deyries". So I suppose all three should be credited as creators. As for the direction, the above framegrab proves that Bernard Deyries directed at least this episode, if not all of them.

About that, here's an interesting producton tidbit. I wrote earlier that the series consists of 45 episodes lasting for about 1 minute and 20 seconds each. Eluasti and Zemrak confirm the part about 45 short episodes in their book, but adds something I didn't know: "It was a production for Antenne 2 for a duration of 30 minutes in total, but dividable into 45 episodes of 1 minute and 10 seconds each." So it was originally produced as one half-hour of sketches. Now we know.

There's one bit of info in "Les series de notre enfance" that I can't quite make heads or tails of, though. The sentence "Cro et Bronto est la première série animée produite par la DIC quand son bureau s'est déplacé à Paris en 1980", meaning: "Cro and Bronto was the first animated series produced by DIC when the office moved to Paris in 1980." That's interesting... but the above screenshot clearly tells us that the series was produced in 1979. So if DiC got their new Paris offices in 1980, how could Cro et Bronto have been produced there? Maybe "1980" is a typo and DiC got those new offices in 1979...? Hmmm.

Even more confusion surrounds the original production and airing time. In my first post, I wrote that it premiered on Antenne 2 in March of 1980. I obviously got that from Planete Jeunesse, but their section on the premiere date has now been changed to "1er janvier 1980 (?)" At least they admit they're not certain. Planete Jeunesse also states 1978 as the year of production, but the credit screen says 1979. I'll trust 1979 to be the correct year here, especially since I really doubt this series was produced over several years.

Since we're on the topic of corrections... I need to correct myself, too, on a little something that I wrote at the very end of the 2012 post. It's a piece of artwork that seems to be the cover for a record edition of the series' theme song. In fact, that's what I thought it was back then. Looking at it now, though, I'm certain it's just an imaginary mock-up cover. I found it on Mange-disque.tv, a French web site which features listings and covers for many real soundtrack releases (including Inspector Gadget). That's what had me fooled. But I notice now that the title logo on the fake cover looks nothing like the series' real titles, and the artwork is simply taken from scans of the French comic book adaptation printed in Télé Récré A2. Plus, when you think about it, would a theme song like the one you just heard above really be likely to get its own soundtrack release? Mange-disque even has the cover posted under the headline "Les pochettes improbables", i. e. "the unlikely covers". Guess I should have taken the hint. Anyway, congratulations to "gosseboffe" (who is credited as the cover's "auteur" if you enlarge it) for fooling me way back when.

Enough fact revisions, though. Want some more videos? Believe it or not, the YouTube episode above is actually NOT the only Cro and Bronto clip to surface lately. Back in January, the French web community Les Pays du Manga uploaded two other episodes to RuTube and Dailymotion! These are very low quality and conspicuously missing any intro and credits, but still nice to see. (I'm guessing the titles for these episodes were invented by the uploaders.)

I think this one below may be my favorite of the three "new" episodes. A few gags took me by surprice.

And to make the roundup truly complete, here's the episode that Osibo News shared back in 2013 as well...

Cro and Bronto FTW! Who wants to start the petition for a Blu-ray release??

UPDATE (January 25, 2016): Since VHS Cartoons' channel is now gone from YouTube, I re-uploaded the "Cro et Bronto" episode myself and embedded it in the old upload's place.
Posted by Mesterius at 2:19:00 AM