I'm late with reporting this, but during April 4-7 this past week, DHX was busy promoting the upcoming Season 2 of their Inspector Gadget series (along with other in-the-making DHX shows) at the MIPTV media market in Cannes, France. DHX issued a press release announcing this last week, on March 30, and if you click that link, you might notice something funny: the press release describes Teletoon's order for Gadget Season 2 as a "new commission".

But wait! We have already known about Season 2 being in production since July 2015, when executive story editor/co-head writer Josh Saltzman revealed it on his LinkedIn profile. And we know that the voice recording started in October of 2015, when actors Ivan Sherry and Lyon Smith announced this on their Twitter feeds. In other words: in reality, Teletoon's order for the second season was made almost a year ago, if not earlier.

You know, if I have learned one thing from reporting news and production developments about DHX's (once Cookie Jar's) Inspector Gadget reboot over the past four years, it is this: production and distribution deals are very often made long before the producers or distributors issue their own, full-fledged announcements about them.

Why is this? I can only guess, but I imagine it has to do with the producers/distributors preferring things to be absolutely set in stone – i.e. being 100% certain that the deals and productions they are promoting are actually happening – before making these wide-spread, public announcements. In this specific case, I doubt anybody thought the second season of Gadget wouldn't happen once voice recording started last October; but it still makes sense when looking at the wider pattern. (Remember how news of the Inspector Gadget reboot originally leaked out in January of 2012, through a Mobile Games Forum panel with Ray Sharma of XMG Studios? It took a full year and a half after that for the official press releases from Teletoon and DHX to emerge; and even then, it was described as a "new commission".)

Which is exactly it. The second season has already been official for the past nine months. So now, it's officially official! Good to have that in black and white, ain't it? 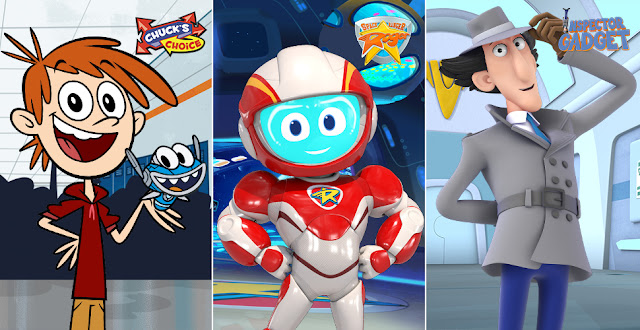 Halifax, NS, 30 March 2016 – DHX Media ("DHX" or the "Company") (NASDAQ: DHXM; TSX: DHX.A, DHX.B), a global leader in kids and family entertainment content, is heading to this year’s MIPTV, the world’s biggest TV and digital content market, with new commissions for three series: Chuck’s Choice has been commissioned by YTV in Canada, and has already been licensed to Turner Broadcasting France; Space Ranger Roger is commissioned by Family Jr.; and season two of Inspector Gadget has been commissioned by TELETOON, in Canada. All three series are being produced at DHX Studios.

Josh Scherba, SVP Distribution at DHX Media, said: “We have a very strong slate for MIPTV with these new commissions underscoring our reputation for producing standout original content for kids and families. Driven by notable creative talents, with Kervin Faria creating and Rob Boutilier directing Chuck’s Choice, and Jeff Rosen behind Space Ranger Roger, our newest two shows have fantastic pedigrees. Along with the iconic Inspector Gadget, now going into a second season after significant global demand, we are looking forward to debuting these shows to the international market at MIPTV.”

The new Inspector Gadget is back – again! The stakes are higher than ever in season two for Inspector Gadget, his niece Penny and their trusty dog, Brain. Will they be able to defeat Dr. Claw and his nephew Talon? Or will the MAD villains finally be victorious? Both sides are more determined than ever to come out on top…even if Inspector Gadget still hasn’t got a clue.


Of course, this release also contains bit of info that we DIDN'T know on beforehand – namely that Season 2, like the first, will have 26 half-hour episodes. And not least, it told potentially interested buyers or investors that they could check out Season 2 of Gadget at MIPTV, which was likely the number one reason for mentioning it in the press release to begin with.

On an unrelated note: Browsing through Ivan Sherry's official "actor" page on Facebook (which I only discovered a few days ago), I couldn't help but smile as I realized that Sherry is actually a reader of my site, and has been linking to and quoting from it several times over the past year. Thanks, Ivan! 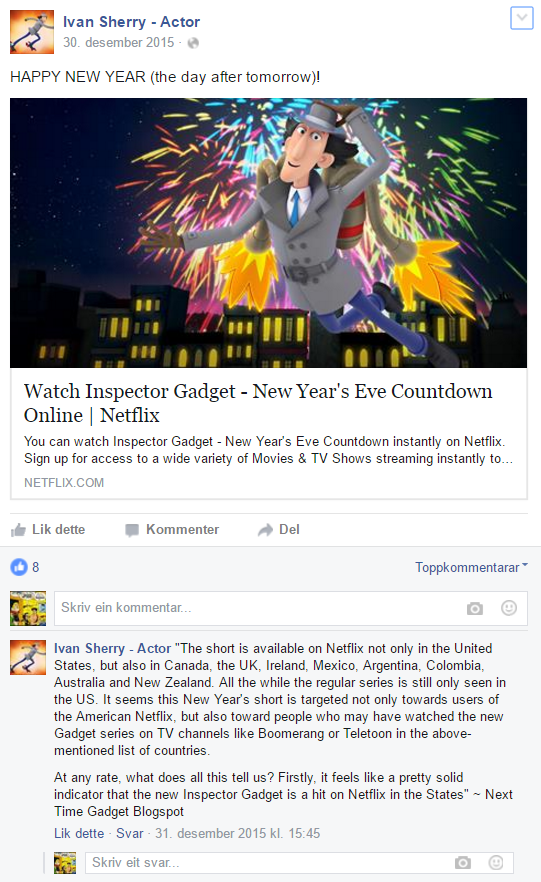 Finally, here's the latest production update directly from Ivan himself: Season 2 was still recording as of four days ago.