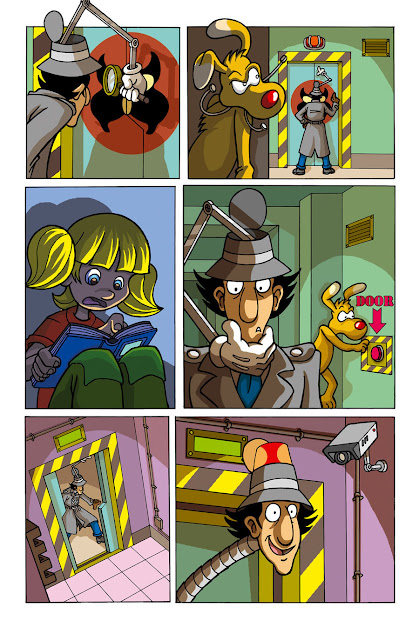 Found these on deviantArt a little while back and realized I had to post them here. This comic page (above) and pin-up illustration (below) are official Inspector Gadget art samples done by comic artist Andy "ND!" Genen for Viper Comics!
You see, back when Viper were trying to decide on the artist for their upcoming Inspector Gadget book, they apparently arranged a so-called "tryout" to find that person... letting several artists draw their version of the Gadget universe. So these are the samples that Mr. Genen produced for that assignment. 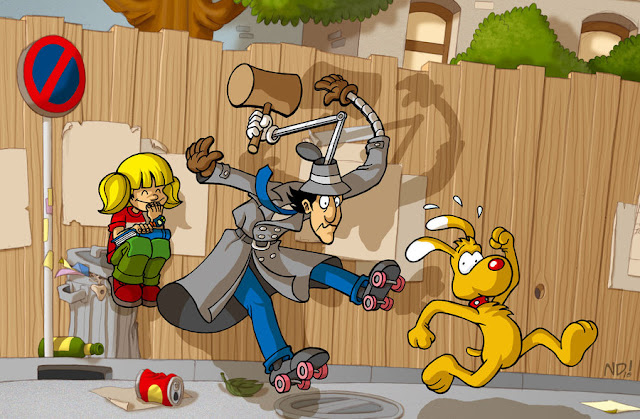 Genen's Inspector Gadget didn't make the cut, but his samples give a fun glimpse into an alternative interpretation of the Inspector in comic book form. Here's what the artist himself says about the experience (in his deviantArt comment for the pin-up):

"This was a pin-up I did for the "Inspector Gadget"-tryout at Viper Comics. Attentive followers of my stuff may recognize the background I recycled here (in fact, I had less than 24 hours to crank out a page and a pin-up...and within those 24 hours, I had no electricity for about 5 hours...)
I had SO MUCH FUN drawing those characters!!"

Despite the harsh deadline and electricity shortage, I have a feeling Genen is really genuine when shouting out how FUN it was. There's a real sense of fun to his artwork, at least - though the characters do look pretty odd at times (especially Penny - what happened to her nose and hands??). But that oddness is part of the fun!

(Oh, that's right: Click here to visit the main deviantArt page of Mr. Genen and check out some of the other cool stuff he's drawing.)
Posted by Mesterius at 3:25:00 AM