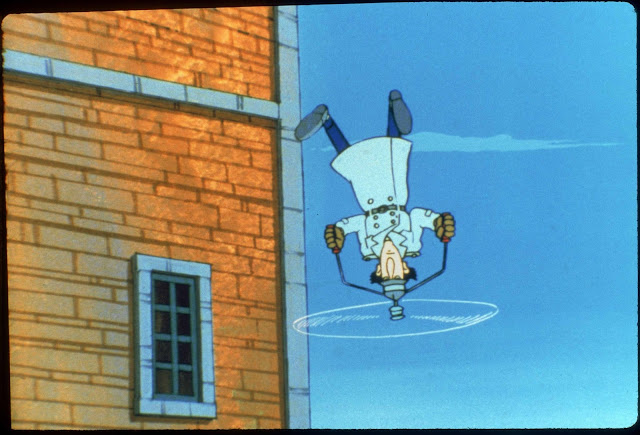 30 years ago today, on the Monday that was September 12 of 1983, the first Inspector Gadget episode aired on syndicated television in the U.S.

That is, if we are to believe the current information on Wikipedia.

For many years, pretty much all online episode guides for Gadget listed September 10, 1983 (a Saturday) as the date of the show's first airing. These episode guides also claimed that the first season of 65 episodes had originally aired weekly, every Saturday morning, from September of 1983 all the way through November of 1984. Only fairly recently (sometimes during the last couple of years, I believe) have these old dates been switched on Wikipedia with the dates currently listed: September 12 as the start and December 9, 1983 as the end of season 1's first airing. TV.com and a bunch of other sites still use the weekly dates starting with September 10.

This is not to say the new Wikipedia dates are wrong, though. I believe in fact that the opposite is more likely. Inspector Gadget (along with He-Man and The Masters of the Universe) was one of the first television cartoons produced directly for syndication, as a so-called "daily strip". In other words, it originally aired in daily installments, to my knowledge every afternoon Monday through Friday. This is why people growing up with the show in its original airing have memories of running home from school to catch the latest episode. And it's also why the first season has a total of 65 episodes, as that number of half-hours was the requirement for first-run syndication.

So all in all, I'm willing to support Wikipedia's latest info as far as the September 12 date goes. But I wanted to point out the conflicting episode guides just as a reminder that September 12 might not be 100% accurate, either. (I don't really know where the information about September 10 or 12 originated in the first place.) Still, as September 12 seems much more likely than the September 10 alternative, I'm going to consider today the official anniversary date.

By the way, Wikipedia's claim that "Winter Olympics" was the first episode to air on that September day in 1983 is nonsense. I know Wikipedia has said so forever, and so has many other sources, including UAV's 2004 DVD edition, but that doesn't make it true. It's a case of wrong information that has been copied over and over again. The pilot episode did air on its own sometimes in 1982, to test the waters; but when the full-fledged series debuted in the fall of 1983, "Monster Lake" was the episode that introduced the show to viewers. The pilot was added to the mix only at the very end of season one's original airing, as episode 65. (The specific version that aired then - today out of circulation - can be seen here. Check 02:35 for the redubbed clip where Gadget's mustache is explained to viewers already familiar with the other 64 episodes of season 1.) So, if we are to celebrate the airing of one specific episode on this anniversary date, that episode is "Monster Lake".

But we are of course not only celebrating "Monster Lake" today. We're celebrating the entire Inspector Gadget series and its history. And to that end... here's what I've been wanting to tell you during this entire post: I have something special to share with you today. Check back here a little later for an exclusive birthday surprice. I think you'll like it.
Posted by Mesterius at 10:41:00 PM