Yes, really. Take a look below at what is probably the rarest Inspector Gadget soundtrack edition of all time: an official, 1995 CD reissue of ABC Records' 1986 LP, "Inspector Gadget - The Music"! 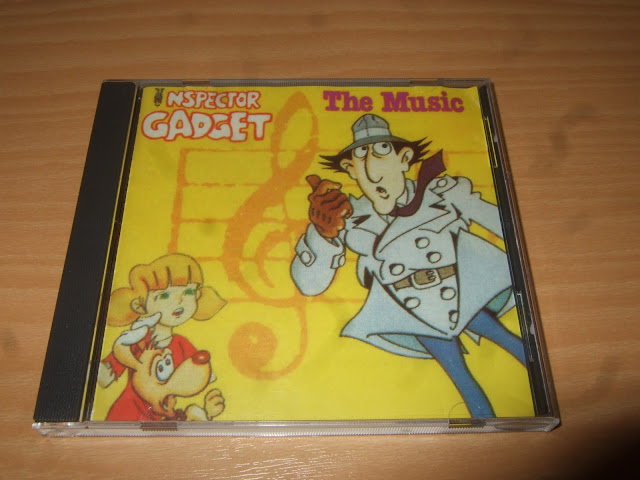 I actually bought this many months ago, but only now have I found the time to write a proper blog post about it. I know what you're thinking: how can this possibly be real? But bear with me and let me explain. I didn't believe it at first, either.

When I first spotted this CD on Ebay (sometimes last October), I was certain that it was simply a bootleg rip of the Australian LP. The cover looked completely homemade - as if someone had just snapped a crappy photo of the LP art and slammed it on a CD cover. Plus, I had never even heard of a 1995 CD reissue of the Australian LP, and could find virtually no proof of its existence online. (I did find one vague clue, but not enough to fully convince me of anything.) How could this CD exist when nobody had ever heard about it? 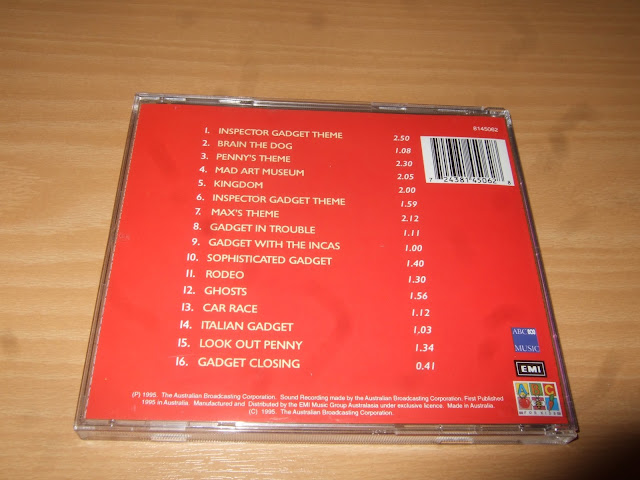 I had to contact the Ebay seller and persuade him to send me pictures of the back cover and interiors before I could even think of believing that this CD was real. But when he did send those pictures, my scepticism started to wane. The CD was looking more and more official. 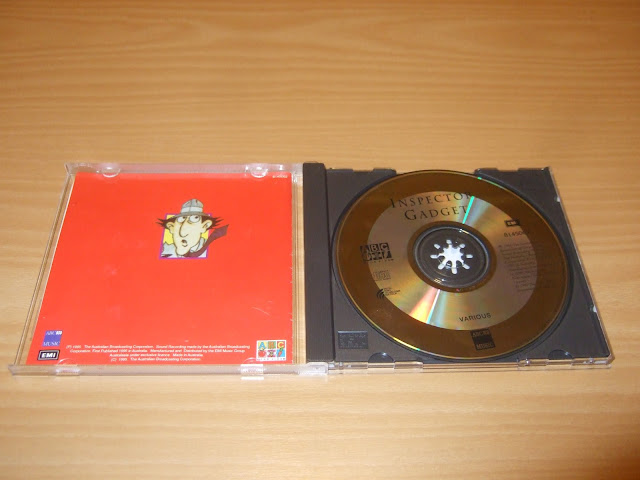 Sure, The Australian Broadcasting Corporation's music division had changed its name from ABC Records to ABC Music since the original LP. But it was obviously the same company... and the copyright information seemed very legit. 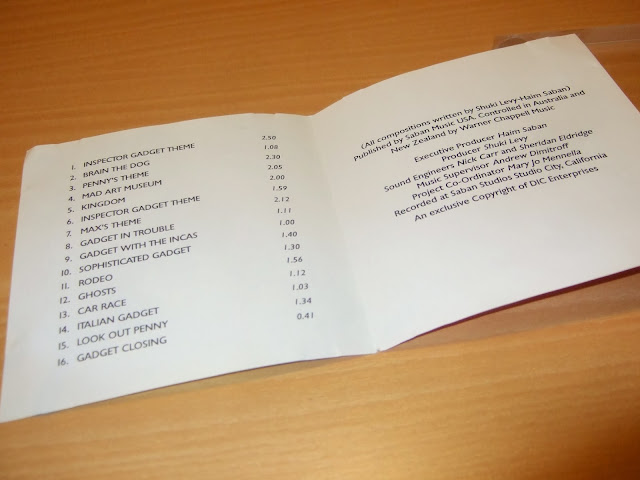 For the record, all the photos you see in this post were taken by me. But even the lower-resolution photos from the Ebay seller showed off some very official-looking details... which convinced me, despite still being slightly sceptical, to take a chance and buy the CD. (Don't even ask me how much I paid for it!) 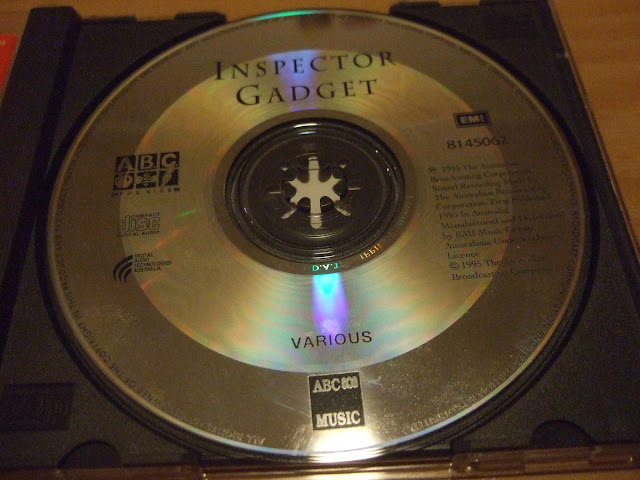 Thankfully, all my suspicions were thrown aside when the CD arrived in the mail. The cover still looked awful, of course. Not only is it a terrible drawing, but the low resolution of the CD cover looked even worse in real life than on the seller's pictures. However... when I popped the disc into my player and started listening, I discovered something much more important: the music itself sounded fantastic. The tracks on this CD were not ripped from an old LP. The tracks on this CD were original recordings, taken directly from Shuki Levy's master tapes - or at least from top-notch copies of them. And they sounded cleaner and clearer than I had ever heard them before.

And realizing that, something else suddenly dawned on me.

Remember last summer when Télé 80 announced that they had 'found much of the missing Gadget music' and were planning a second CD? In the year that's passed since, they have stated several times that their new Gadget CD is sourced from "masters". Don't bother looking for those statements on their site, by the way... Télé 80 is still in the habit of inexplicably deleting Facebook posts. Below is a snapshot of a now-deleted thread from March 11. (At the time, the upgraded Gadget CD was scheduled for May 27; it was later pushed back to September.)


As we can see, Télé 80 clearly states that the tracks on their new CD are sourced from "Masters". I tried asking if this was true of all the tracks, but they never answered that question. They have not revealed anything about where they found those master tapes, either. But after I got hold of the 1995 Australian CD, it all made sense to me. They got the masters from ABC Music.

Think about it: ABC preserved the master tapes used for their soundtrack edition during the nine years that passed from the 1986 LP until the 1995 CD. Most likely, they have preserved those masters to this very day... and I suspect that, when Télé 80 started doing research for their second Gadget CD last year, it likely didn't take them long to hear about the 1986 LP (which has been listed on Discogs for years) and then get in touch with ABC Music. So, by pure coincidence - because ABC Records happened to take better care of its master material than Saban Records - 16 tracks from Levy and Saban's soundtrack survive on master tapes today!

I've been annoyed before that the Australian soundtrack didn't include more unique background music that was not already on the French LP.  I still am... but now that I know (or at least feel reasonably certain) that these tracks survive on masters today thanks to the Australian soundtrack, the double-dips feel a bit more justified. Of the 16 tracks on ABC's edition, 12 are background music cues; among them awesome compositions like "Mad Art Museum", "Gadget in Trouble", "Sophisticated Gadget", "Ghosts"... just to mention some of my personal favorites.

And here's what I've been wanting to get at all along: If my assumptions are correct, then I'd say there is even more reason to be excited for the new and upgraded Télé 80 CD. Because those specific, 16 tracks - sourced from the ABC masters - ought to sound spectacular. Heck, they might even sound more spectacular on a CD produced in 2013 than on ABC's CD from 1995... although they already sound great there.
(It probably also means that most of the other 14 tracks on Télé 80's new CD are remastered from vinyls. Not that this is such a bad thing, either, if the job is well done. I think almost all of the Générikids track excerpts sound very good, including the tracks that would logically be vinyl-sourced, like "Gadget on Mars", "Gadget in Japan", "Pharaohs" etc. Plus, I suspect that track 27, "Inspector Gadget (Opening TV)", is also from a master tape, as Shuki Levy has it up on his site. But aside from that, I'd expect the absolutely best-sounding tracks to be the ones that were released on the Australian edition.)

Regarding the 16 Australian tracks: I should point out, for the sake of accuracy, that the Australian track list contains a few title mistakes. Track 6, strangely titled "Inspector Gadget Theme", is actually the fantastic "Chocolate Factory". And "Max's Theme" is not a Maxwell Smart reference, just a clumsy misspelling of "Mad's Theme" (a different orchestration than the one on the French LP, as I mention elsewhere). And here is proof that my Australian CD is as straight a reissue as they come: Not only does it have the exact same content, it even reproduces the track list errors from the original LP - which I also have in my collection. Let's make a quick comparison: 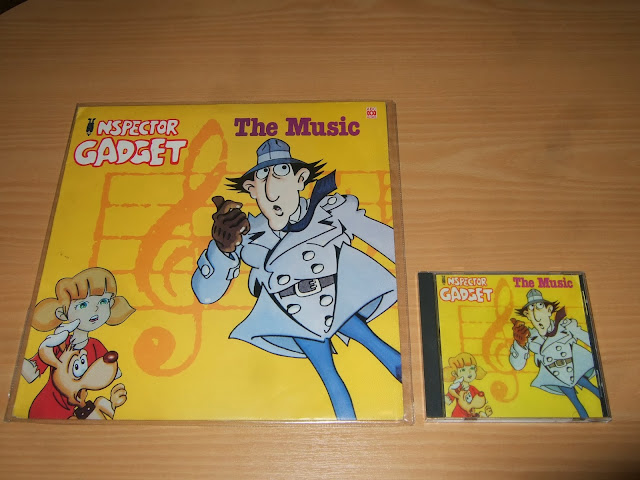 The mistitled track 6 is actually not listed on the LP's back cover (even though it's on Side 1)... 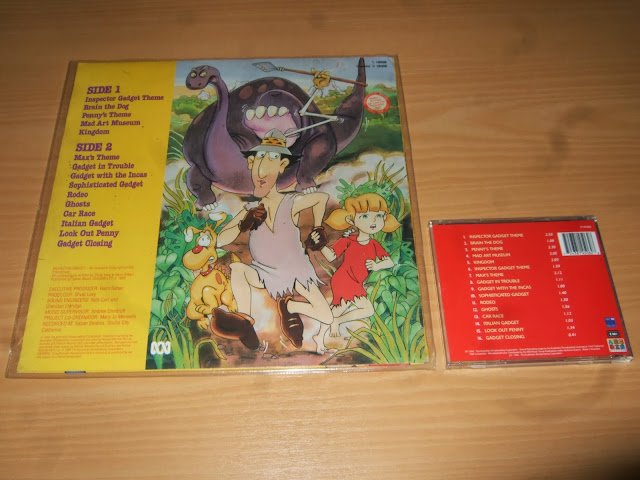 ...but it is listed on the LP's label (below). I have a feeling that perhaps Saban forgot to include "Chocolate Factory" in the track list that they provided to ABC... and then later on, some ABC employee discovered that Side 1 included one more track after "Kingdom", and decided to just call it "Inspector Gadget Theme", not knowing its real title was "Chocolate Factory". Just a theory, of course, but it might explain why track 6 is listed on the label, but not on the back cover. 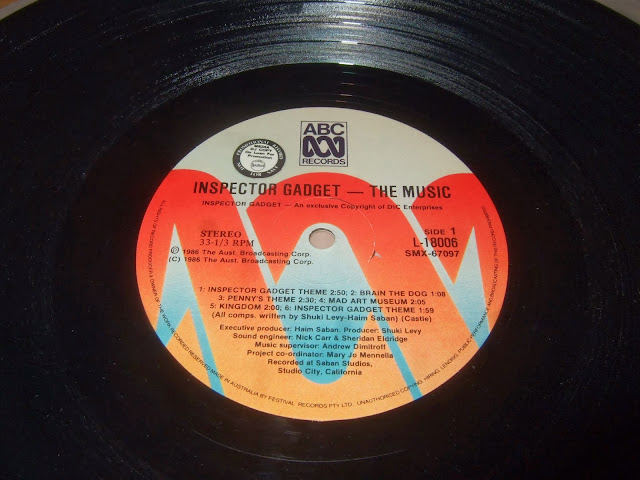 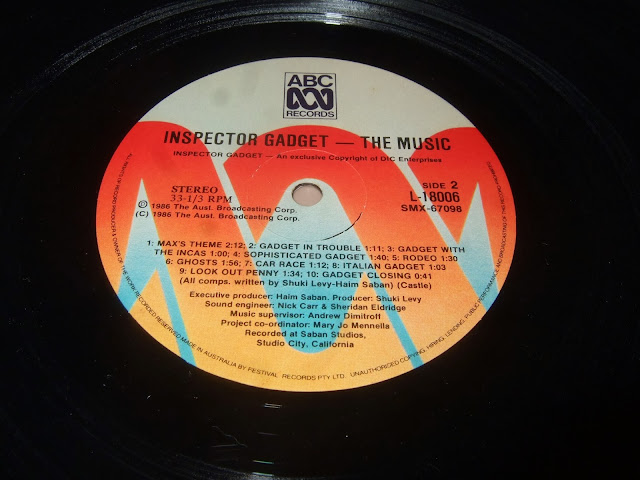 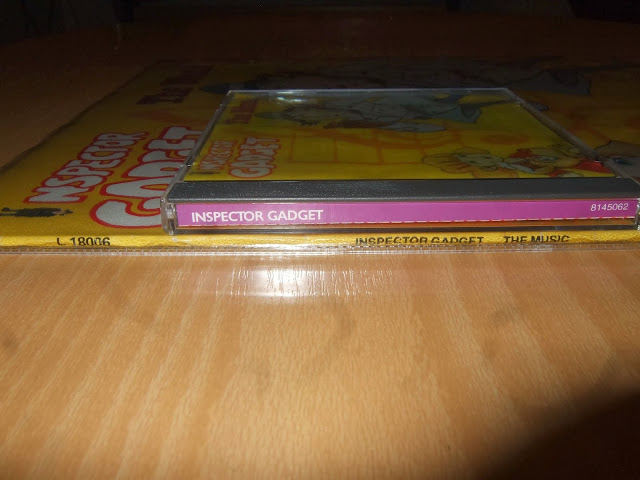 I bought the Australian vinyl early in 2012, long before I knew about the CD reissue. At the time, my plan was to digitalise the LP and share its unique tracks online, as I had no hope that anyone would bother to re-release the music officially. But then I heard about Télé 80's upcoming CD project (the first CD, to be exact) and put my own plans on hold. Which is still the case now. Télé 80's new CD starts shipping from Amazon today, and there's nothing I want more than to see this great music spread legally on a good CD edition. (Which it promises to be, I think - I've already ordered my copy.) Therefore, as tempting as it is, I will not be sharing anything from my "Inspector Gadget - The Music" CD today...

.....ohh, who am I kidding?? I can't resist sharing just a couple of tracks with you! Consider this a teaser for what you'll very likely be getting on the new Télé 80 CD. Here's a track that can be heard on both the French LP and the Australian LP/CD, the eerily beautiful "Ghosts". (Compare with a fan rip from the 1983 French LP here.)

And below is one of the rarer tracks released only on the Australian soundtrack, "Italian Gadget". I'm only sharing the first half of this one, though... you'll have to buy the new CD to get the rest (as well as the instrumental "Brain The Dog", the alternative "Mad's Theme", etc...).

I'm hoping these excerpts give you an idea of the CD's sound quality. At least in my ears, the CD version of "Ghosts" sounds far better than the LP-ripped version... which should bode well for Télé 80's edition.

All that being said, the 1995 Australian CD is still shrouded in mystery. Why is it so unknown compared to the Australian LP? As I mentioned in the beginning of this post, I did find one trace of the CD's existence on the site Australian Television Memorabilia, in the soundtrack section for the ABC TV series Swap Shop. Under a listing for Swap Shop's 1989 LP soundtrack, it says: "(Re-issued in 1995 in a double CD pack with “INSPECTOR GADGET”)." The year of release fits, as does the publisher, ABC. I contacted the administrator of the site, but he didn't know anything more about the Gadget CD than what was posted online. Personally, I'm thinking that perhaps this double pack reissue of both Swap Shop and Gadget was a very limited one. The fact that the two CDs were a combined reissue might indicate that it wasn't a particularly widespread release, just two old children's TV soundtracks bundled together in a CD package for the few kids/parents who might want them (the "ABC for kids" logo also seems like a hint in this direction). This is only speculation, though. Maybe we'll dig up some facts in the future.

Learning about this CD's existence has been a fascinating experience. It reminded me that the internet doesn't know everything. But now, at least, the internet knows a little more.

Here are some high-res scans of the CD's cover art, label and booklet to round off... 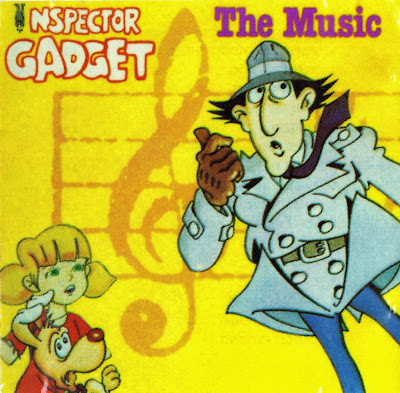 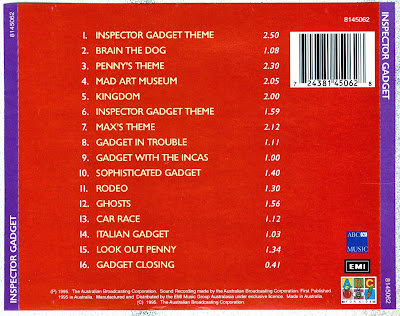 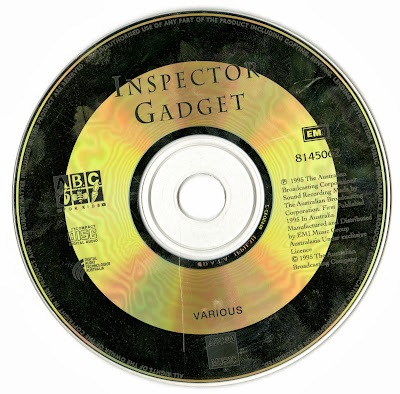 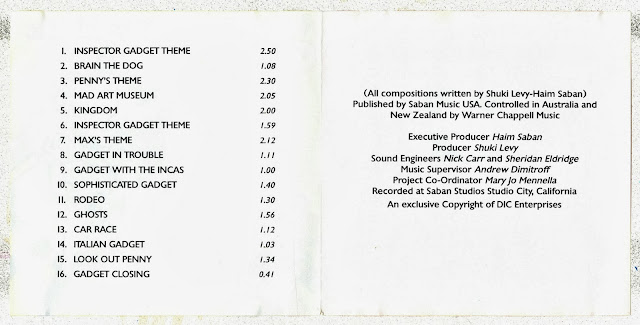