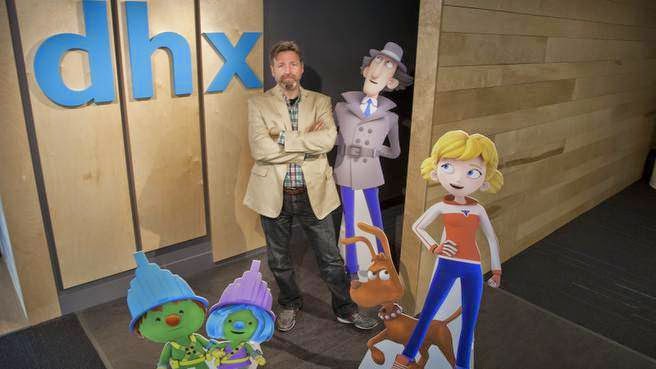 More than a whole year after we got to see the redesigned Gadget in CGI, we get our very first look at Penny and Brain. Courtesy of this Chronicle Herald article, they and Gadget (and The Doozers, unrelated show) pose together with supervising producer Phillip Stamp (hey, don't we already know him?) at DHX Halifax's newly opened space at Park Lane Terrace.

Wow. Just wow. I really don't know what to say at the moment. Will I have a more reflected view on this later on? Possibly. But right now... these are my gut instincts speaking.

Penny: The moment I saw her design, I wasn't sure it rubbed me the right way... but the more I look at it, the more I like it. At least I think I like it. She is different from the original series, to be sure, but her look retains some of the same spirit and personality. Maybe her head shape is slightly generic, but the face and eyes feel like Penny... though I wish I could see those parts in higher resolution to judge properly. And I like how part of the original hair style is kept, but the hairdo still looks slightly different. One question, though, exactly how old is she supposed to be? I'm getting a 15-16 years vibe from the photo, personally.

Brain: Not quite so sure about his design. I do think it looks kind of charming, but... this design doesn't quite say "Brain" to me the way the two other designs say "Penny" and "Gadget". He looks less cartoony and more like a real dog than in the original series - which is surpricing to me, since I find the designs of Penny and Gadget VERY cartoony (in a good way). Although, maybe there will be a contrast between his look when standing on all fours, acting like a normal dog, and his look as a humanized dog standing on his hind legs. We know that he will don disguises in the new series, like in the old, so I'm expecting a lot of cartoony slapstick and action from that. Also, I like his suspicious facial expression - that does feel like Brain.


Before I forget... the Chronicle Herald piece also included a few written observations on the new series, including a very enthusiastic quote from Phillip Stamp:

DHX has three series in production at the Halifax studio, including the highly anticipated Inspector Gadget relaunch, and an announcement of a couple of other titles to be produced at the site is expected soon.

There was a glow of Inspector Gadget-like characters, gadgets and backdrops emanating from most computer screens during the tour, providing evidence of the mammoth nature of the conversion of the decades-old children’s favourite into a 3D format animated series.

“It’s a safe bet you’re on to something good when you’re laughing out loud at sequences during production,” Stamp said.


Oh, and... Need I mention that, despite my design criticisms above, I'm excited as hell to see more of this? C'mon, DHX, give us more! High-res character designs! Clips! Trailers! Time to roll out the advertising!

Ahem. Anyway, now you've heard my spontaneous rambling. I would love to hear yours. Please, everybody out there who has an opinion about Penny and Brain's new look - voice your opinion in the comments. Are these designs a stunning triumph or a total catastrophe? Or everything-in-between?


UPDATE (June 26): I've been having some interesting discussions about the redesigns with fellow Gadget fans Daniel and Cortoony over in the comments section. One of the main topics has been the colors chosen for Penny and Brain's new designs, compared to those in the original series. Well - just for fun, Cortoony went ahead and actually did his own color edit, changing both Penny's jeans and Brain's overall coloring to match the 1983 colors more closely... and I just had to show it to you. The official version is to the left, Cortoony's edit to the right: 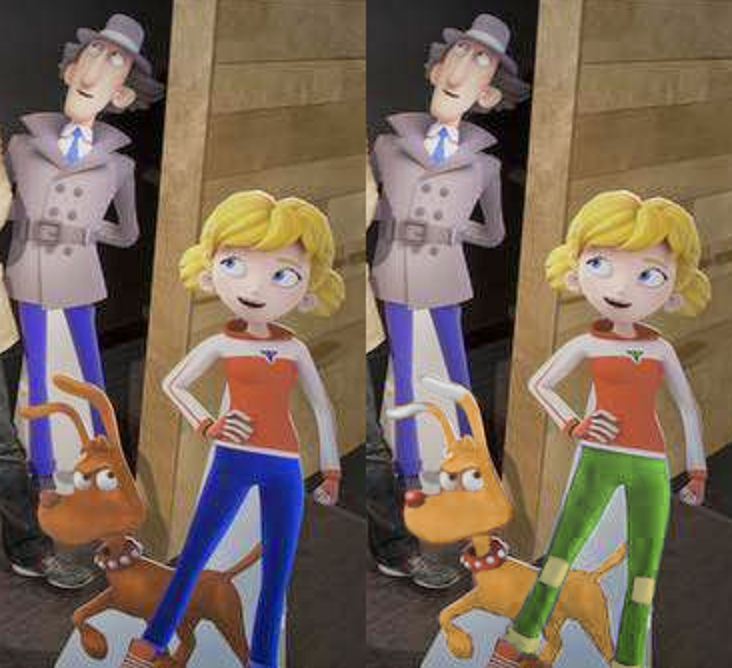 I really like what he's done with Brain, bringing back the brighter colors of the old design; and I think Penny's jeans look awesome with the vibrant green and the added knee pads (not to mention the matching green sweater emblem). That is not to say I don't like the official versions of the designs... in fact, I like them a lot, and Brain is beginning to grow on me. But it's still interesting to compare like this, wouldn't you say? For more, see Cortoony's first color edit attempt, with a more subdued green and without knee pads. And to compare with the original series... here's a cel scan with better-looking colors than the cel photo I posted up above: 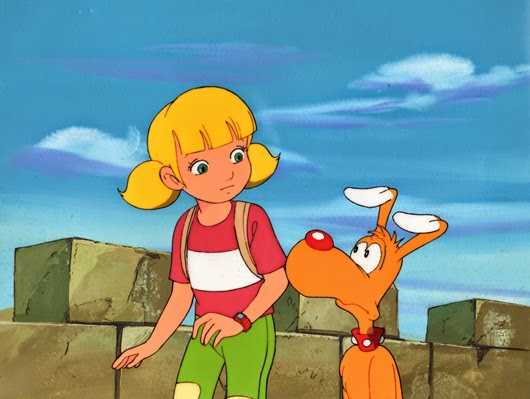