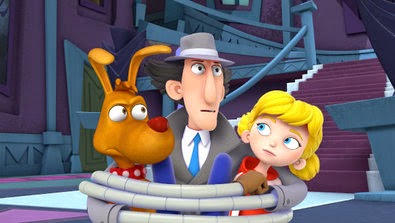 TV Info has added the German schedule information for two more half-hours of the new Gadget series in addition to the five we already knew. One English episode title is missing, sadly, but here's the full updated list, including episodes 6 and 7 at the bottom:

Episode 2
2a. Towering Towers
2b. Game Over Man, Game Over

Episode 4
4a. Better Class Of MAD
4b. Cough Due To Claw

Episode 5
5a. Dog Show Days Are Over
5b. One Bad Apple


Now, as you can see, episode 6b's English title is missing... and the reason for that is, the episode guide sent out by Super RTL mistakenly lists the English titles for both #6a and #6b as "Sucks Like MAD". Looking at the German title and synopsis for #6a, "Der Saugotron 9000", it's quite obious that this is "Sucks Like MAD", since the plot is centered around a vacuum cleaner. (Yep, I know enough German to see that without translating.) So that leaves us without a known English title for #6b right now. Ah well. Here's the German Super RTL schedule for episodes 6 and 7, including my direct translations of the German titles...

And not least, here's the rest of the new screenshots...

...and a rerun of the top image, which i find cute and a bit interesting. This is from episode 6, though I don't know which part. Looking at the background, it's hard not to make associations to the classic episode "Haunted Castle", and the strong use of purple in the background indicates to me that this is one of Dr Claw's castles... 'cause, like it or not, purple is M.A.D.'s new black. Might we be seeing a new horror-themed episode? (I do hope, by the way, that this really is only ONE of Dr Claw's castles, and that he has multiple bases and headquarters around the world, as in the original season 1. The thought driven home by later reboots that he would have only one home base, which everybody knows the location of, is ridiculous.)


UPDATE (December 15): The TV Info site for episode 6 (specifically for its rerun on January 25, at 09:35) actually added one screenshot after I checked it on Saturday. Here it is... and look who's fighting... 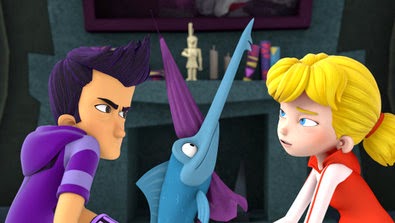 UPDATE #2 (December 16): I just noticed that, for some bizarre reason, I had misspelled the title of episode #7a as "Gadget Da Bomb", whereas its real title is "Gadget's Da Bomb". This is especially weird to me as I distinctly remember double-checking all the episode titles and coming to the conclusion that "Gadget Da Bomb" was correct. But I've now checked three different sources, and the correct title is indeed "Gadget's Da Bomb". I've corrected the mistake throughout the post.
Posted by Mesterius at 8:47:00 PM