Does anyone still care about this? I sure hope so, 'cause I finally finished it! Of course, 99.99% of the people reading this will undoubtedly have watched World Screen's 3-minute clip of the new series by now. This video - the first extended preview that DHX released of their Gadget reboot, as a teaser for October's MIPCOM market - was posted online at the end of September, and that's also when I reported about it and promised a full commentary. A lot of unforeseen delays got in the way of that promise, but I always intended to keep it.

When I suddenly and unexpectedly found the World Screen video months ago, it was something of an indescribable moment for me. I had been gathering the smallest little snippets of information related to the new TV series for 2 1/2 years... and suddenly, here was a full, three-minute clip of an episode! I think, partly, that's why I felt I couldn't just jot my thoughts down together with my news post - it was just so big. In retrospect, I really should have. I hated falling behind with the commentary for as long as I did; and the delay of course led me to become more ambitious than I would have otherwise, causing me to take even longer to finish. Sigh. In fact, I realized as I was finalizing this that it was long enough to divide naturally into three posts/parts - which I'm also doing to give each part more focus. The first subject of discussion here is one that's especially close to me personally. Hope you enjoy it... or, well, get something out of it.

I'll have to get this off my chest first - and those who know what I think of the original series' music will probably not be very surpriced. I think the new theme song is not right. I'm not going to call it terrible, but it is, frankly, a huge disappointment to me.

And here is why: IT'S NOT THE ORIGINAL COMPOSITION. It's not the wonderful theme written by Shuki Levy. Just to be 100% clear, I'm not talking about the orchestration here, but about the actual melody. The song. Sure, there is a refrain in the new theme song sounding superficially close to the classic Inspector Gadget theme... but that refrain is in truth not emulating Levy's composition. Instead, as many fans have already remarked on both here and elsewhere, it's emulating "In the Hall of the Mountain King" by famous Norwegian composer Edvard Grieg.

And before anyone starts arguing that "In the Hall of the Mountain King" has the same melody as "Inspector Gadget" - because, believe it or not, some people on the internet do - let me just say right away that it doesn't. Yes, there are indeed some very obvious similarities. It might well be that Levy was inspired by Grieg's piece when he wrote the Inspector Gadget theme... though to be fair, I've never heard Levy himself confirm this anywhere, and someone writing it on Wikipedia without a documented source doesn't make it a fact. For all we know, Levy might have channeled Grieg without being consciously aware of it... or it might even have been sheer coincidence that the pieces sound so alike. But I digress.

My point is: regardless of the similarities, there are also important differences between Levy and Grieg's pieces -- differences enough to make the "Inspector Gadget" theme and "In the Hall of the Mountain King" two SEPARATE and UNIQUE compositions. For one thing, while the refrain in both compositions starts out similarly, the Inspector Gadget refrain uses less beats, and ends up becoming a different melody. (Not sure if "beats" is the proper musical term here, but hopefully you get the point.) And of course, there are many other differences aside from the refrain. Let's listen to the new Inspector Gadget series' theme song again... and then, let's compare it to both Edvard Grieg's original masterpiece and Shuki Levy's original masterpiece:

The New Series Theme Song as heard in the World Screen video (embedded from Behind The Voice Actors):

In the Hall of the Mountain King ('I dovregubbens hall') by Edvard Grieg:

In the new series' theme song, especially near the end, it's painfully clear that the composer is adapting "In the Hall of the Mountain King" rather than "Inspector Gadget". Not just the main refrain, either: The beats at 00:32 in the intro, where Dr Claw slams his fist into the desk and Talon does a surpriced take, are lifted directly from the tail end of Grieg's piece.

You might argue, "Why expect a reboot to use the original Inspector Gadget theme, when the soundtrack music is owned by a different company?" Well, there is that... but that situation is a bit different than it used to be. Yes, it's true that the original music for Inspector Gadget - including the famous theme song - has always had separate owners from the TV series. Back in the 80s, the music's owner was Haim Saban and Shuki Levy's company Saban Records, through which the score was produced. This posed a problem for the Gadget franchise later. Due to a conflict that occurred between DiC and Saban in the early 90s, Saban stopped providing music for DiC's shows in 1991 - and none of the Gadget reboots and spinoffs that DiC produced after that point could use Shuki Levy's original music or compositions, including the famous theme song. For a long while, it seemed like this would always be the case...

...however... a few years after DiC was purchased by Cookie Jar (in 2008), I was suddenly filled with hope regarding the theme song situation. Cookie Jar, then later DHX, put out a couple of pretty cool official iOS games. The first, 2010's "Inspector Gadget - M.A.D. Dash", used Levy's theme song outright; the second, 2013's "Inspector Gadget - M.A.D. Grab", used a remade theme song adapted directly from Levy (part of that remake can be heard in this animated ad). Finally, it seemed to me, someone in charge had realized how important Shuki Levy's theme song is to the Gadget franchise -- and more importantly, had spent the necessary dough to licence the music from its current owner. Today's owner, by the way, is Warner Chappell, as seen in the below end credits snapshot from the "Inspector Gadget - M.A.D. Grab" game: 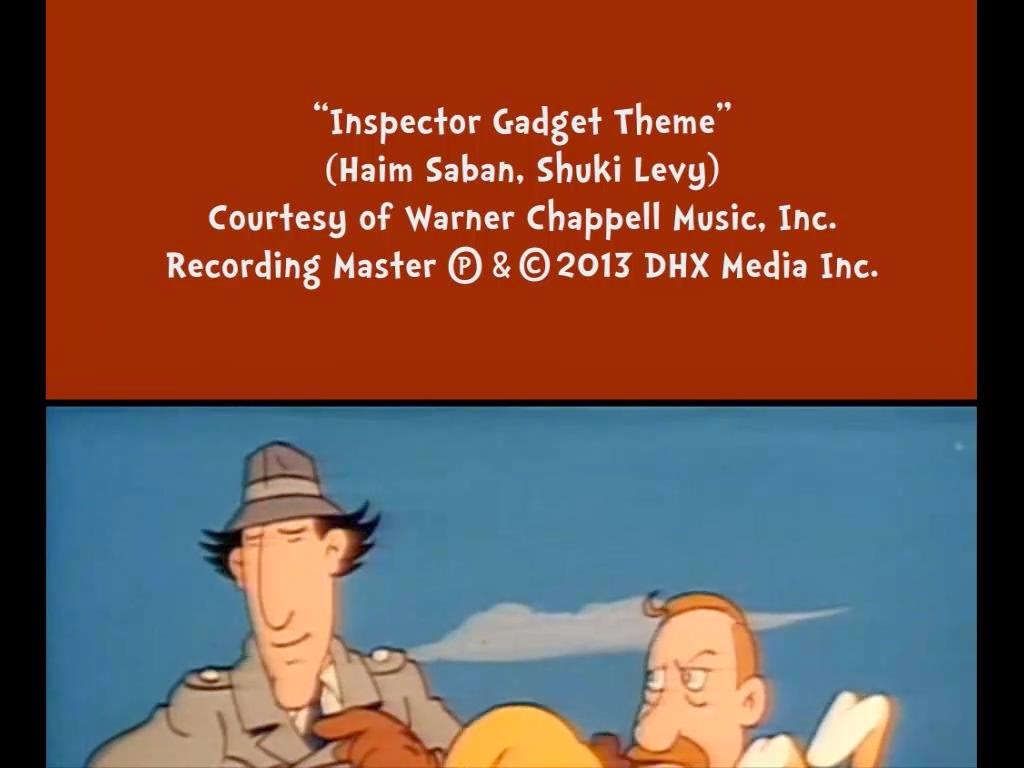 So: If DHX can afford to license Shuki Levy's theme song for a low-budget iOS game, then they should certainly be able to afford it for a full-fledged, high-budget TV series. Which leads me to believe (or at least speculate) that it was actually a creative choise by them to do a similar-sounding, yet different theme song for the reboot series, rather than something they had to do because of copyrights. Maybe I'm wrong and it still has something to do with copyrights -- but as I said, I just don't get why DHX would NOT pay the music fee for an actual TV series, when they DID pay the fee for a little iOS game. It makes no sense.

In truth, this makes no sense either way. The new theme song is nowhere near as good, catchy or memorable as Levy's amazing original. To me, the 1983 "Inspector Gadget" is one of the greatest theme songs ever composed for television. I'm far from the only one of that opinion either. So what on earth were they hoping to achieve by doing a different-yet-obviously-similar song? The mind boggles.

The worst part is, the superficial similarities make the new theme song come off as cheap. Now, based on my thoughts above, I can't quite get myself to believe that they did this to save money. But considering that the new theme song sounds superficially close to the 1983 theme, but different - and also considering that it adapts a similar-sounding piece of public domain, classical music - it does kind of give off that feeling. And that's never a good thing, regardless of the reasoning behind the scenes.

Well! That's how I feel about the new Inspector Gadget series' theme song. Have I made it loud and clear yet that I'm very disappointed? I had really, genuinely, expected an actual remix of Shuki Levy's work; and the substitute offered is nowhere near good enough. Now the question remains... will I rant my way through the rest of this commentary as well, or will I actually find something I like in parts 2 and 3? Only one way to find out. Tune in tomorrow for... Part 2: The Intro Sequence!
Posted by Mesterius at 5:18:00 AM