Here's another news piece which has gotten very much delayed, but which I still think is worth getting out there, partly just because it's so cool. Remember the little Inspector Gadget section of Super RTL's TOGGO site? Turns out that was only the initial starting phase, since Toggo.de has since launched a full-fledged Inspector Gadget site with character sections, games and videos! Before I say anything more, I think Toggo's own YouTube trailer can be a good introduction:

The trailer has been out since January 8, the day before the series' German TV premiere on Super RTL, and I suspect the full Toggo site launched about then as well. I have to say -- even though the whole site is well below my age level, it's still pretty awesome to see such a fleshed out web page for the new series, introducing the show and its characters to kids in a simple, straightforward manner. 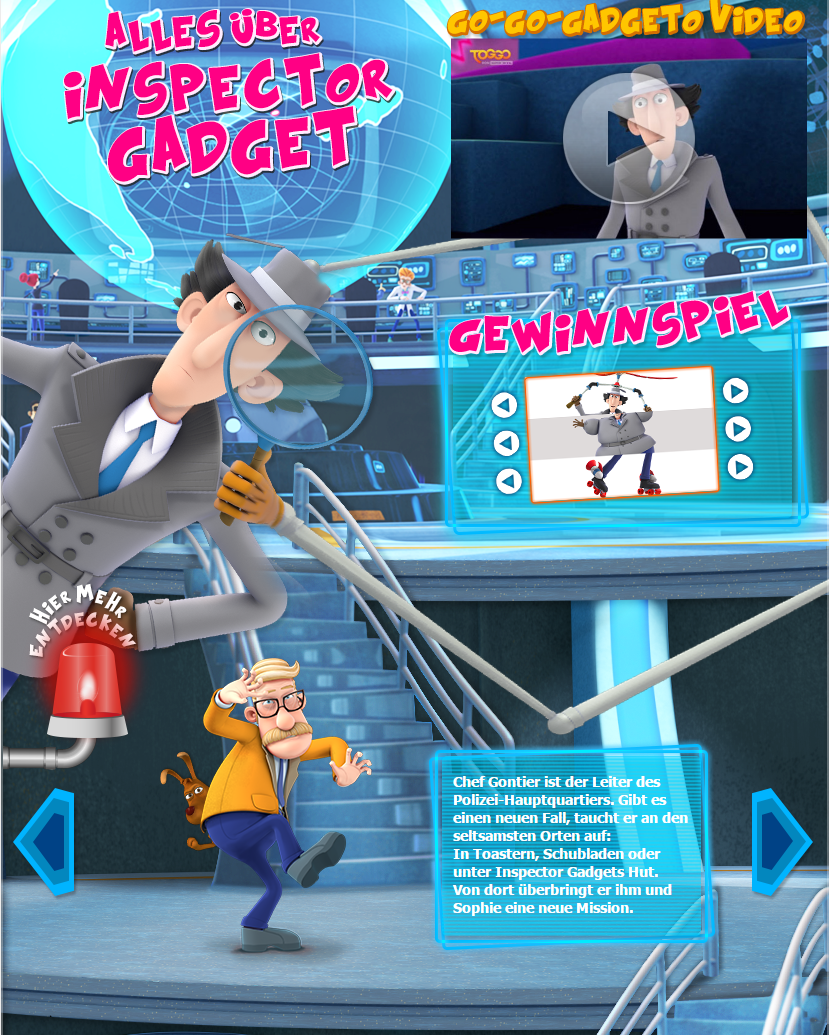 I especially like how the site has separate character sections for Gadget/Chief Quimby/Professor Von Slickstein, Penny/Brain and Dr Claw/Talon/M.A.D. Cat (with slide presentations of the starring characters), which are linked to from the main page. Not only does this separate in a clear-cut manner between good guys and bad guys, it also separates between the good guy adults - Gadget and Co. - and the good guy kids - Penny and Brain - who are of course the real heroes. Sure, Penny is a teenager here, but the irony from the original series is still essentially present: the kids are the only ones who really know how to save the world from evil; without them, the adults wouldn't stand a chance. So naturally Penny and Brain deserve their own part of the site. The name for their section is also quite interesting, I think: "Spass mit Sophie und Fino", meaning "Fun with Penny and Brain". The wording feels like a way of making kid viewers identify with these two characters. 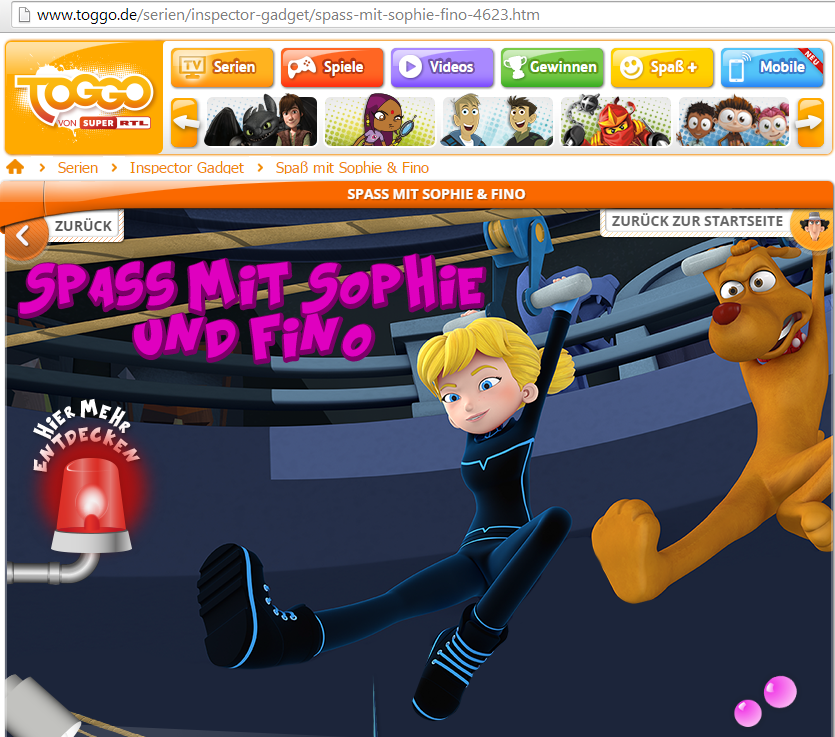 In addition to presentations of the stars, each character section also has its own video trailer, game and assortment of screenshots. The screenshots are high-res, but look a bit softer than I'd expect, as if they have been upscaled. Still, well worth a look. Here's one example from the Dr Claw section: 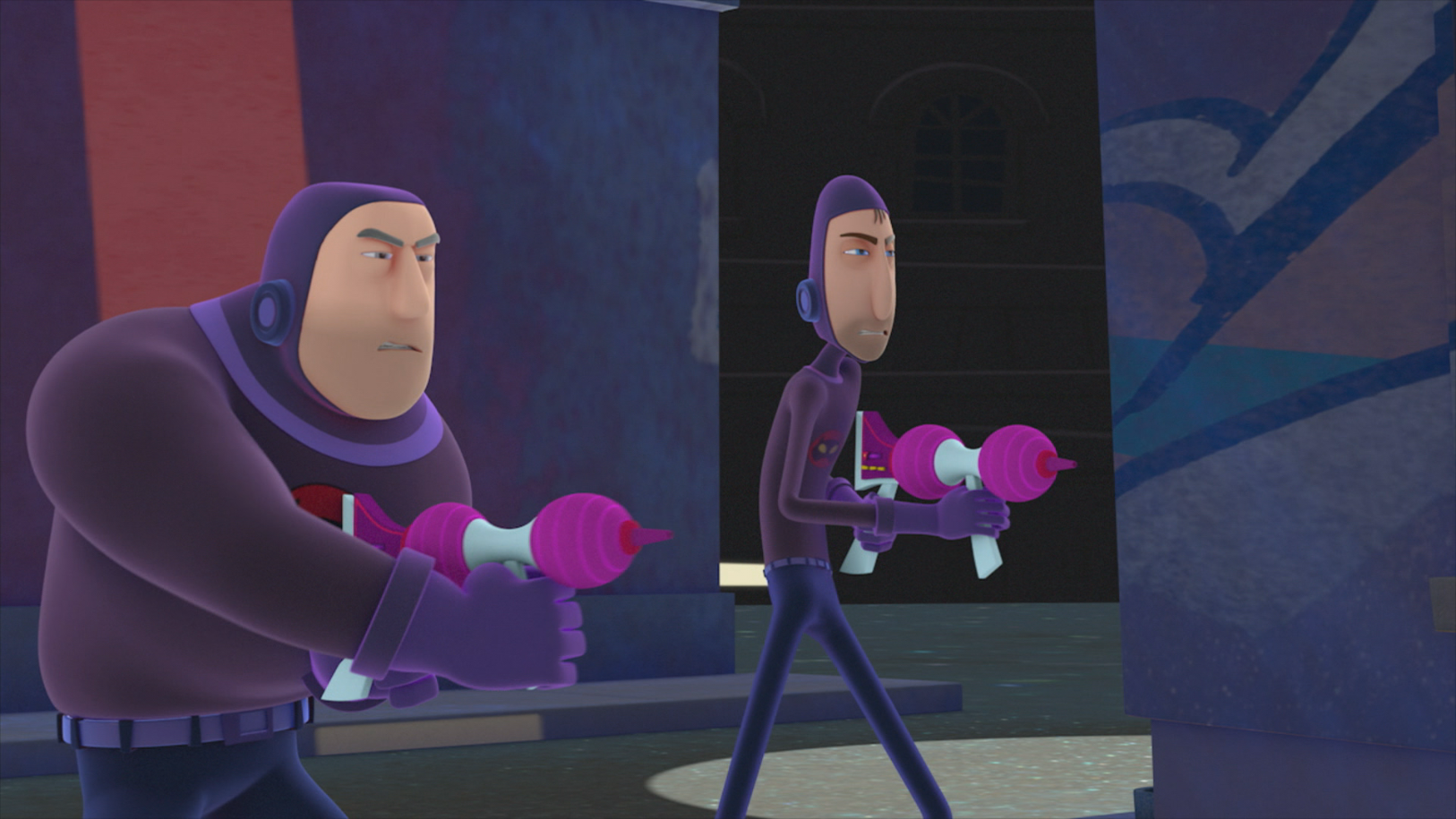 The games, though, while probably okay for the smallest children, could be a lot more exciting in my opinion. The Inspector Gadget section's "Gewinnspiel" is an extremely simple one where you need to select the correct gadgets for Gadget's missions... though made more interesting by small video rewards and the chance to win actual prices. In M.A.D.'s section, there's "Fang die MAD-Katze" (Catch the M.A.D. Cat), which is actually even simpler: 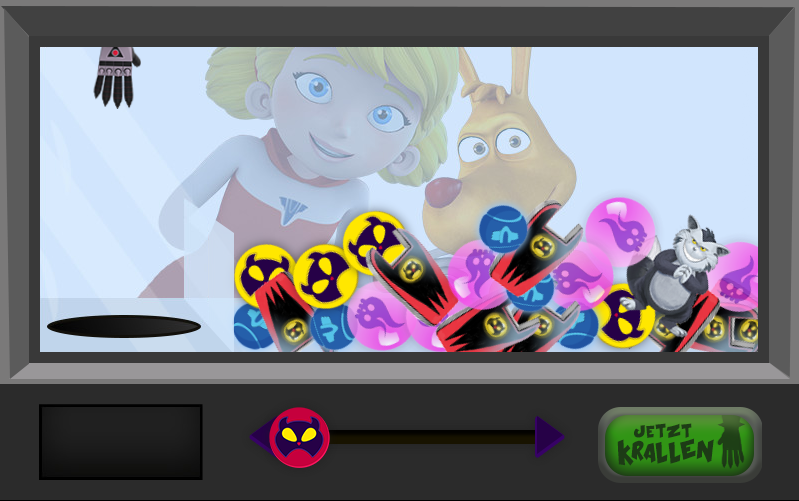 The only action-orented challenge is offered in the Penny/Brain section: "Rette Inspector Gadget!" ('Save Inspector Gadget!') is a runner game where you - as Penny - need to avoid obstacles from M.A.D and keep running and jumping towards your uncle to save him from the clutches of evil. It's okay, but could easily have been much more exciting (even if, I know, it's WAY below my age group). And why on earth doesn't an action game like this have any music? It actually becomes quite dull to play after a little while, with long stretches of almost complete silence. Come to think of it, music is conspicuously absent from the whole site. Hmmm. 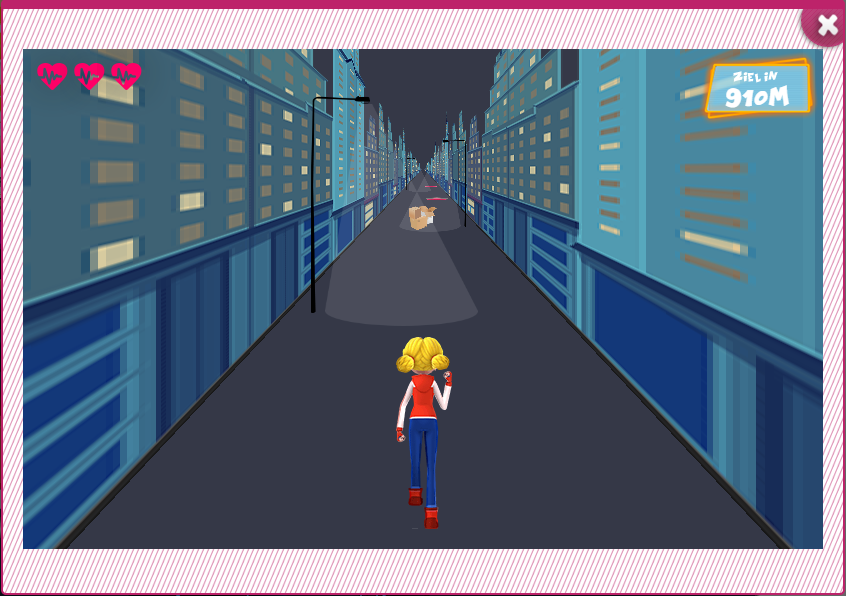 Complaints aside, though... the end screen of "Rette Inspector Gadget!" is really lovely.


And aside from the characters and games, yet another interesting feature is the Inspector Gadget video section, where two new half-hour episodes are made available to stream for exactly one week after they have aired on Super RTL (separated online into 11-minute segments, as you can see on the site). The available episodes for the moment are half-hours 3 ("Rock Out" / "Strike A Pose") and 4 ("Better Class of MAD" / "Cough Due to Claw"), which aired in Germany this Friday and Saturday. 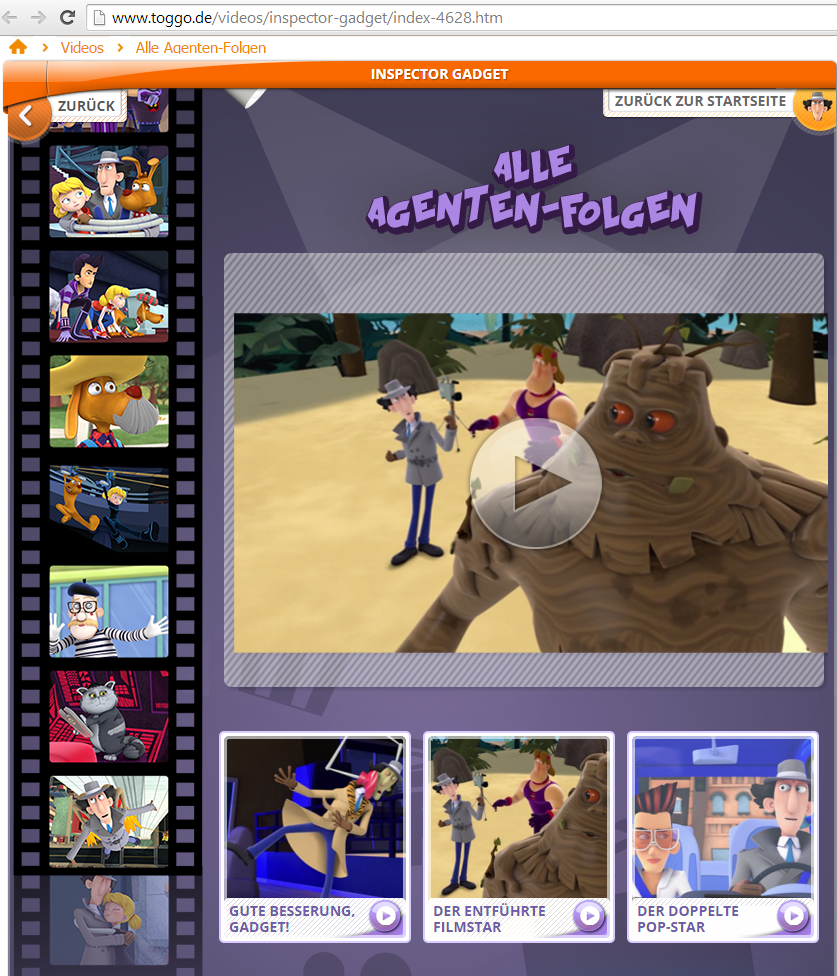 As with the earlier Agenten-Mission video reward, the episodes are not playable on my laptop, only on my cel phone, annoyingly. In fact, this is also true of all the video trailers in the different character sections: the Super RTL player keeps refusing to show them on my PC. I'm not sure if this is some kind of technical error or a restriction for visitors outside of Germany (I'm guessing the latter, but the site doesn't seem to say anything about it). If anyone in Germany is reading this, perhaps you could check how it works on your end?

One video ad has at least become easily watchable elsewhere - the earlier mentioned reward for the Agenten Mission game (which can still be played at the bottom of the main page, by the way). Here it is, embedded from a January 6 upload on Super RTL's Facebook site...


(By the way; MAN, do Gadget and Penny look freakish in the live-action bits of that ad. Bobbing heads, floaty eyes and half-open mouths... yep, that's appealing!) 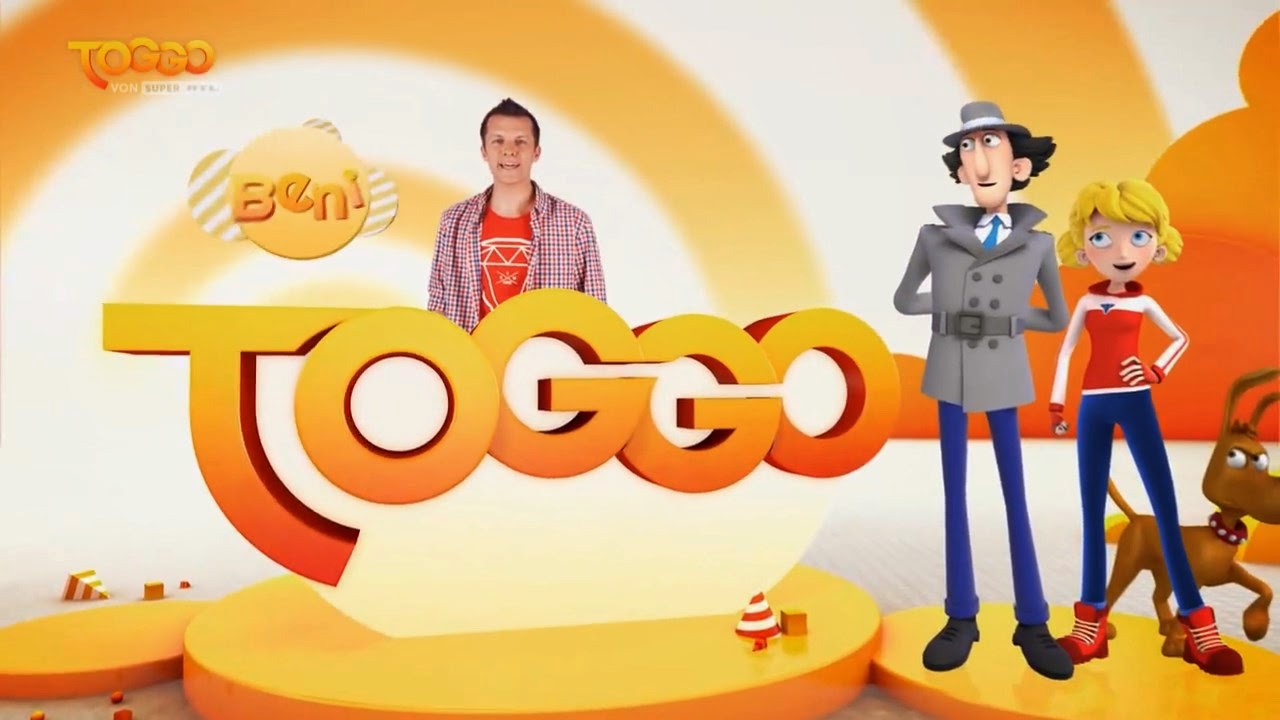 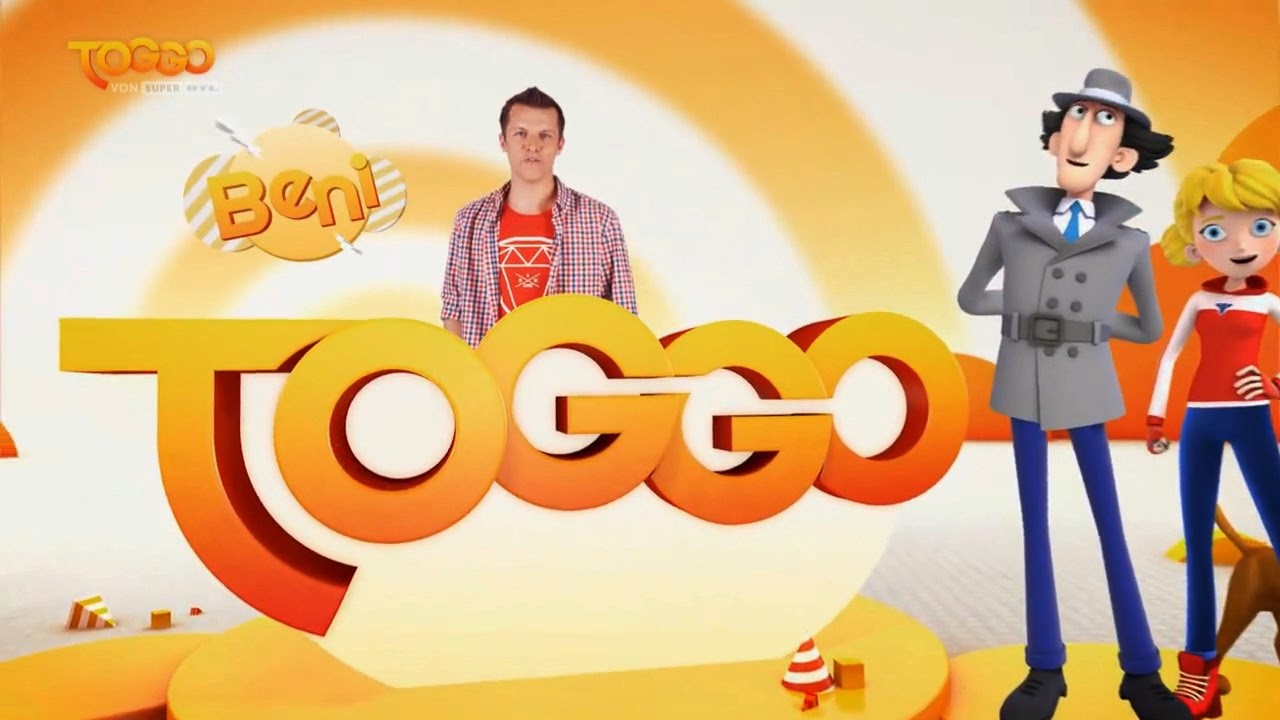 Anyway, to get back to the main point of this post -- I'm loving the fact that Super RTL has given the new series a proper home page. It's the only one of its kind right now, seemingly, but the elaborate way it's set up and designed does make me wonder: could a proper inspectorgadget.com (which doesn't just lead to a little Facebook site) be in the cards as well?
Posted by Mesterius at 4:22:00 AM