This information comes from character animator Scott Baltjes over on his Flickr account, underneath a photo which was taken on December 12, 2014 (and uploaded on December 15). And before I post his full quote, I kinda feel like showcasing the photo. Remember those cardboard cutouts in DHX Halifax's hallways of Gadget, Penny and Brain (among other characters)? Well, turns out the DHX empoyees decided to dress up Gadget a bit for a recent Christmas party: 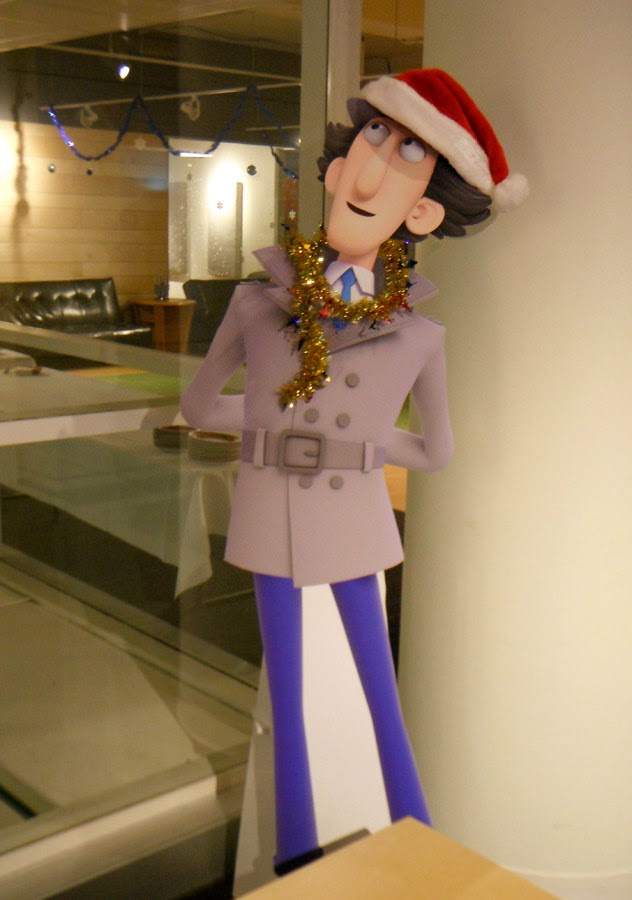 Inspector Gadget - airing on Teletoon here in Canada June 2015. Everywhere else in January or February.


The interesting thing here is not only how much later the Teletoon Canada premiere will be than for every other country announced so far (which Baltjes even acknowledges himself with "Everywhere else in January or February")... but also that it mirrors information announced in the French press last summer. Back then, it was reported on numerous French news sites that the public channel France 3 had purchased the new series, and would air it in the fall of 2015, following the tentative Candian premiere in June. Here's a Google-translated quote from an Ozap.com piece from July 9, 2014 (which I already posted about here):


The June 2015 part matches what Baltjes is saying about Teletoon. Considering that, could the part about France 3 actually be true as well? I had assumed that Boomerang France broadcasting the reboot automatically meant that the France 3 deal had fallen through... but maybe not. One of this blog's readers, Nbu, presented a theory regarding this a little while back:

About the France 3 deal : it's likely F3 purchased the series for a second release, meaning Gadget will come on it later that year, maybe september 2015.


If Nbu's assumption here is correct, then perhaps both Boomerang and France 3 aquired broadcast rights for the new series... with the agreement that it would premiere first on the paid Boomerang channel early in 2015, then get a second, free launch by France 3 in the fall. Considering Gadget's huge popularity among French audiences, it sort of feels logical to give the reboot the most wide-spread release possible.

Anyway, the info on Teletoon Canada seems more than legit, so I'm adding that to my list of upcoming premieres in the news margin. I'm more than a little surpriced, honestly, that the network which actually commssioned the new Gadget series will seemingly be the last (or one of the last) to premiere it... but then again, maybe Teletoon's summer 2015 launch was planned before any Boomerang premiere dates were set.
Posted by Mesterius at 8:17:00 PM