I just found out that James Rolfe of Cinemassacre (probably best known as The Angry Video Game Nerd) came out with an in-depth, 2-part review of the Inspector Gadget series back in November! He starts out by saying it's one of his favorite cartoons of the 80s (cool to hear!) and goes on to make a lot of other (mostly) good points about the show's storylines, its inspirations and its characters. Watch and enjoy!

UPDATE (December 18, 2012): The Youtube videos I had originally embedded are no longer up, so I'm embedding the review directly from Cinemassacre's official Blip Channel instead.

UPDATE #2 (November 30, 2015): The embeds I posted in 2012 no longer work, and for some reason I can't find any embedding options on Cinemassacre.com... so I decided to just link directly to the videos instead. Go here for Part 1, and here for Part 2.
Posted by Mesterius at 3:09:00 AM No comments:

These 6 high quality pictures (three of which I used in the temporary banner for this blog) were originally found at the French site Tout Le Cine (click here to go to the 'Inspecteur Gadget' section). These pictures seem to be scans of original cels like the ones from THIS TV. Whatever the source, they look nice. (Well, perhaps except for the one with Corporal Capeman in it. You know... because Corporal Capeman is in it.) 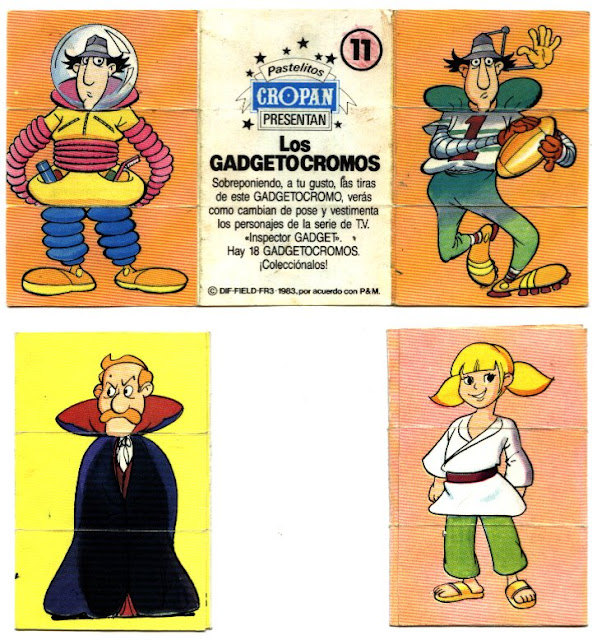 The "Gadgetocromos" sticker album, directly from Spain of 1983, allows you to change around the I.G. characters' wardrobes as much as you like! Wanna make Penny a 1/3 vampire? Simple: borrow the vampire part from Chief Quimby. From this very cool blog about Spanish sticker albums.
Posted by Mesterius at 4:05:00 AM No comments: