Well, that's a lot of news jammed into one headline. Guess I'll start with what I find most interesting. As the below video points out, "Something's brewing on iTunes"...

...and that something, I believe, is an all-new iOS game starring Gadget! This will be the first video game based on the show since the hit "Inspector Gadget - M.A.D Dash" (2010), which became popular enough to push a new TV series into production. This new game, set to be released in two days, is apparently a sidescroller like M.A.D Dash but otherwise looks pretty different. Let's have a closer look at those flashing images from the video: 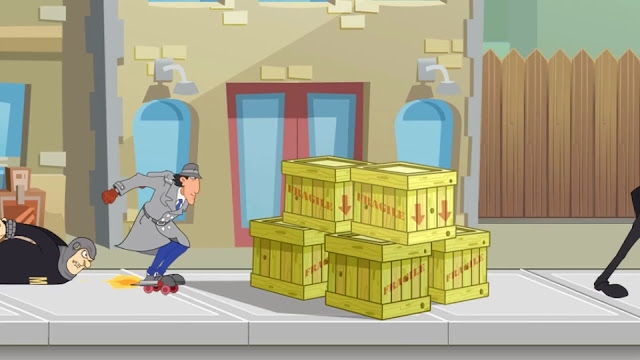 I must admit I find this art style both kind of charming and kind of sloppy-looking. It's great that they're using the original series designs, but the drawing style and rendition of those designs seem a bit off, particularly the faces of the M.A.D agents. 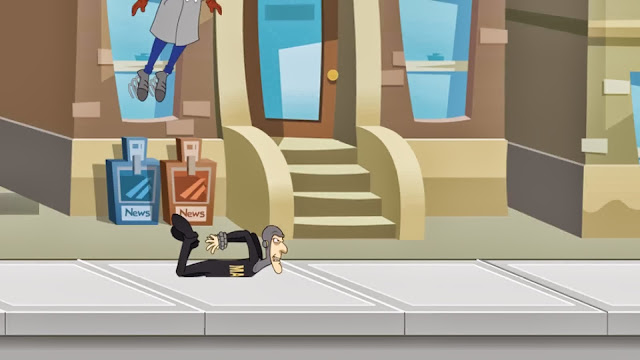 Also, here's an amateurish mistake: Gadget's springs are not supposed to come out from under his shoes... they're supposed to be an extension of his legs, which is why this gadget is called "gadget legs". At least the gadget copter looks okay... 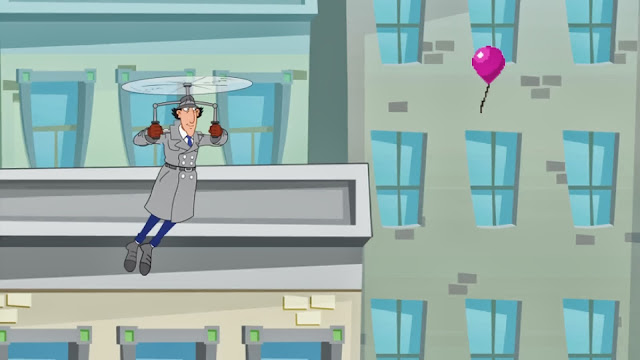 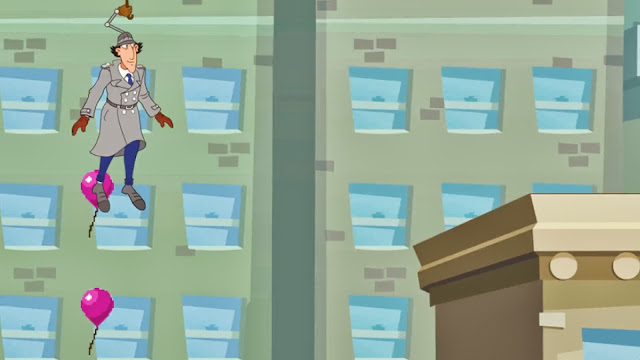 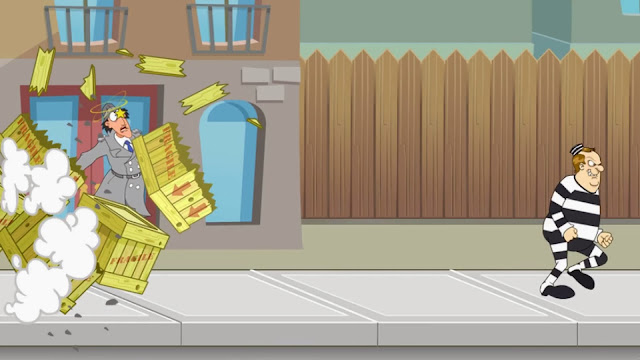 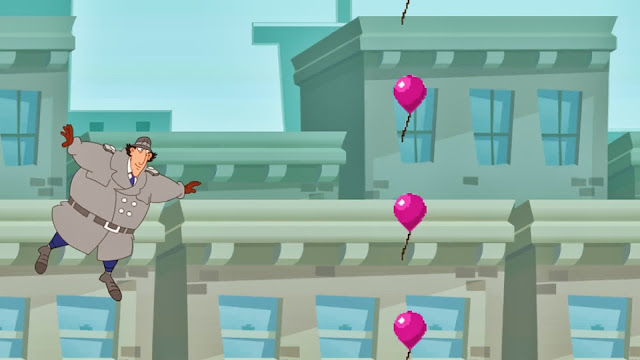 And the cartoony frame below actually makes me curious to see the gameplay in motion. 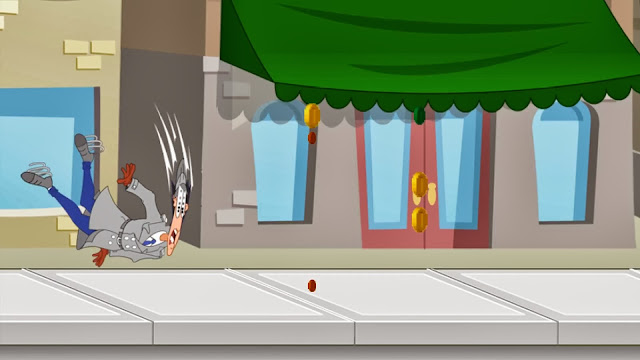 I guess I'll give this game a shot. It's nice to see DHX Media doing something new with the Gadget franchise (the in-the-making TV series excluded), and timing-wise this ties in well with the series' 30th anniversary. Which brings me to the next piece of news - the YouTube channel that posted the game's teaser video:

Simply titled "Inspector Gadget", at least in the account name, this is not a fan-made tribute channel as I first suspected when I stumbled upon it. Its banner (above) acknowledges Gadget's recent anniversary with "INSPECTOR GADGET - Celebrating 30 Years", whereas the beginning of the info section reads, "Welcome to the OFFICIAL Inspector Gadget Channel". DHX has actually given Gadget his own channel.

Furthermore, when checking out one of the channel's videos, I quickly discovered the link to the official Facebook page. In fact, if you try typing the url "inspectorgadget.com", you will now be redirected to this Facebook Page. As we can see below, it shares the YouTube channel's logos and banner tagline, and its info section reads (direct quote): "H!i Welcome to my official Facebook page. Penny and Brain got me this for my 30th Birthday." Yeaahhhh... this Facebook page is apparently run by Inspector Gadget himself. How... amusing. 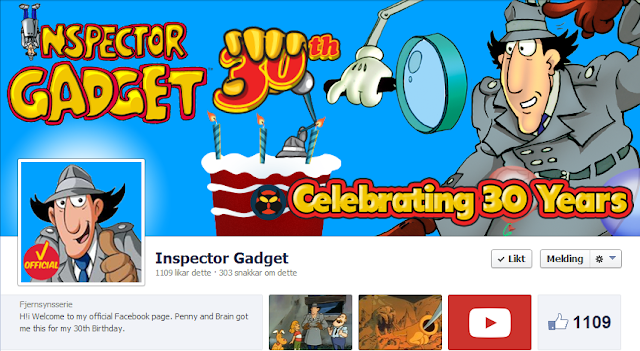 Both the YouTube channel and Facebook page have been online since September 27, so it appears that DHX is doing a concentrated effort to create more online awareness of Gadget (and using the 30th anniversary as a springboard for that). This is a great initiative, of course, but I'm a little confused as to whom they're targeting. So far, the Facebook site and YouTube channel consist mostly of short clips and screenshots from classic episodes, many of them accompanied by Gadget's "personal" comments. I guess this might be mildly entertaining for kids. However, as a 30-year old brand, Inspector Gadget has quite a lot of older fans - and almost nothing currently featured on the Youtube or Facebook sites seems particularly geared towards them. (The YouTube channel has one full episode, and the Facebook page features an ad for the new DVD release of the series, but still.) How about some original production artwork on Facebook? How about some rare videos on YouTube, like for instance high-quality versions of these bumpers? There is so much unrealized potential here...

As of now, I'd say the game teaser is the one somewhat interesting thing to be seen on the two sites. But who knows? Maybe that could change with time. Come to think of it, maybe these official outlets for Gadget could even become the first places to feature trailers and previews of the upcoming CGI TV series.

UPDATE (October 19, 2013): The game, entitled "Inspector Gadget M.A.D. Grab", was finally released to iTunes on October 18, after a four-day delay from the date announced in the teaser video (a new video has been added to the YouTube channel to mark the launch). The game is compatible with iPhone, iPad, and iPod touch and is currently available for free, so GRAB it while you can! 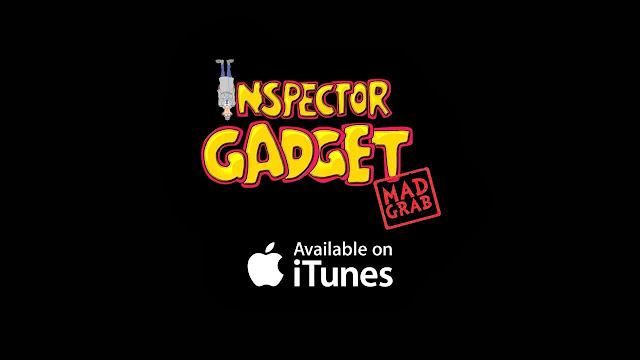