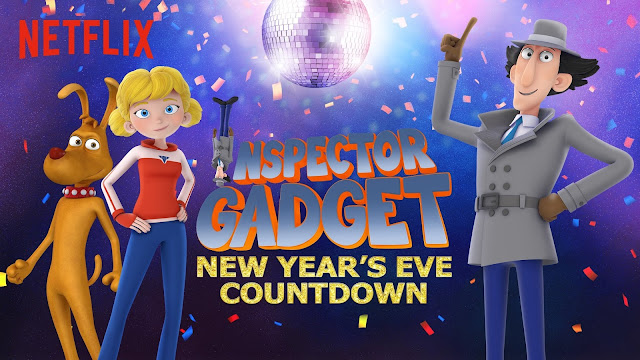 Quick reminder: Episodes 14-20 of the reboot series are now available on the Australian iTunes in full 1080p HD, as "New Inspector Gadget, Season 1, Vol. 3". As mentioned before, this third volume was released to iTunes on December 14, about 1 1/2 month after the physical DVD release. 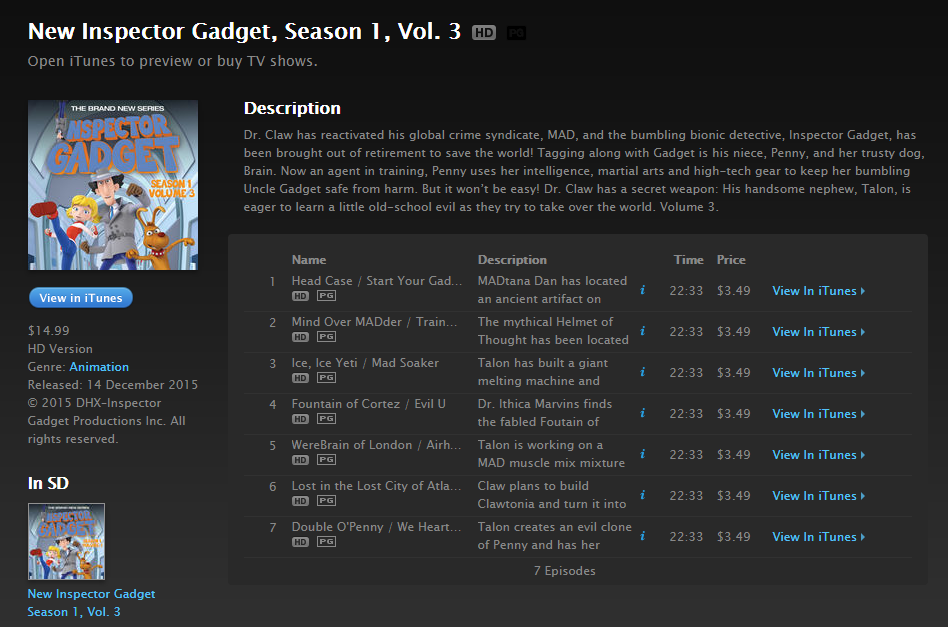 Speaking of Brain disguised as a reindeer, as we were the other day, how about checking out a piece of promotional art for the 1992 special Inspector Gadget Saves Christmas? 'Tis the season after all. Clipped from a vintage TV Guide, this is a combined ad for Gadget and the concurrent Christmas special Noel, as the two of them premiered back-to-back on NBC that year.


I find this particular promo piece interesting for several reasons. For one thing, it makes the Gadget special look a LOT better and more entertaining than it was. The characters look great, as if we're right back in a 1983 episode; and then there's their seasonal clothing. Penny dressed up as an elf? Santa Gadget? Hell yeah... THIS I wanna see! Of course, the actual special gave us none of what this artwork teases, and the crude animation from Hung Long Animation Company couldn't hold a Christmas candle to the original show.

There is however a specific reason why the above promotional drawing looks so good - it was based directly on a 1983 model sheet. Namely this one...


I'd like to provide a little more context on the print ad while I'm at it. It appears to have run in a number of TV magazines in 1992. Here it is from two other TV Guide publications: 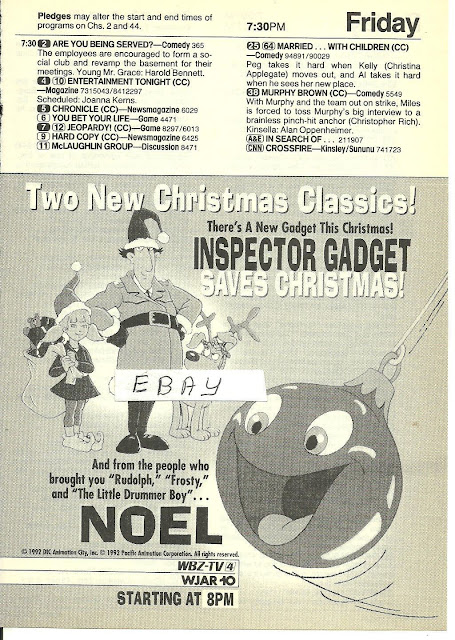 The below press kit from NBC - dated November 20, 1992 - was up on Ebay sometime last year. It includes separate artwork and a written press release for both specials. Quite clearly, this is what the TV Guide ad was put together from: 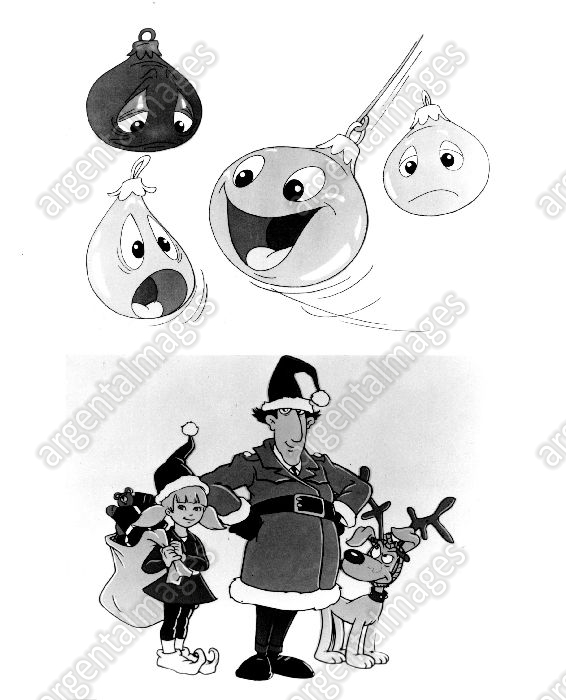 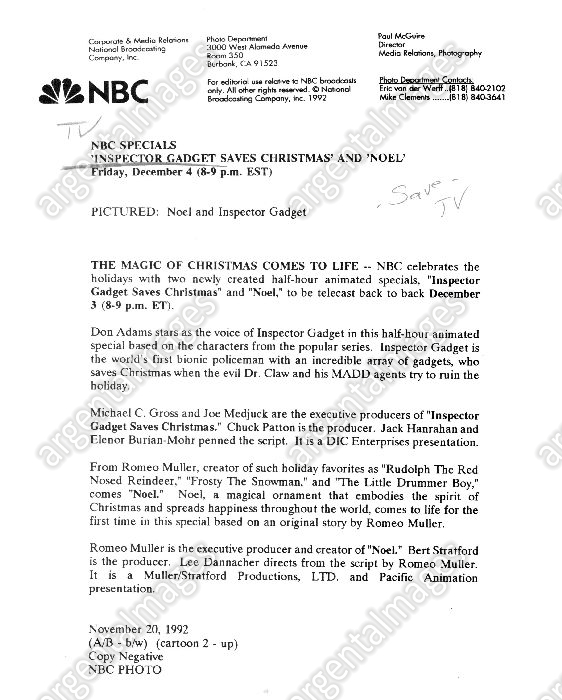 (A small contradictory detail: the headline of NBC's press release says the two specials will premiere on December 4, but the first paragraph says December 3. Just for the record, December 4 is the correct premiere date. For evidence, see this extract from the December 4, 1992 edition of The Cincinnati Enquirer, which tells us that Gadget aired at 8pm and was followed by Noel at 8:30 (search through the OCR text).)

And finally, in case you're wondering: yup, the Gadget artwork does exist in color. Way back in 2006, this full-color promotional cel was sold on Ebay. Gotta say these colors look nice... 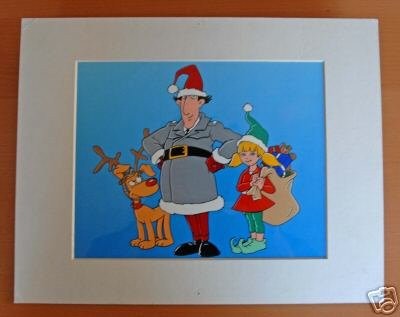 Okay, this just amuses me too much not to share. 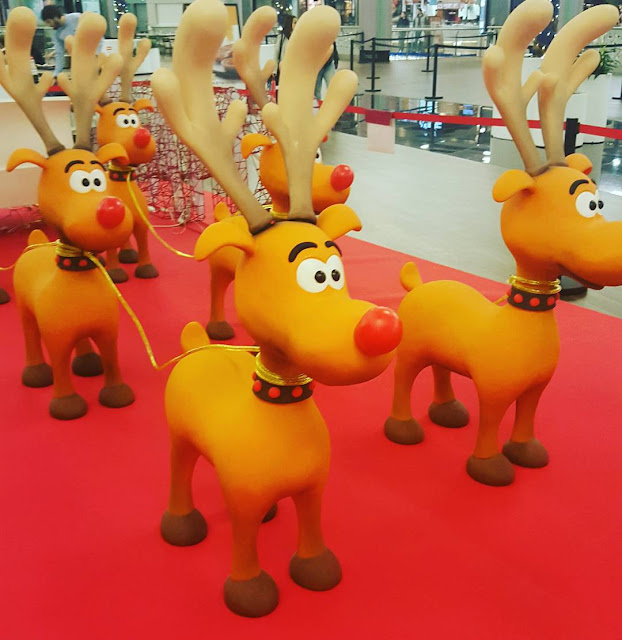 Over at Instagram, the user Claudia González Iglesias has posted this photo of a reindeer Christmas display in a shopping mall, accompanied by the following caption (via Google Translate): "Kids say they are reindeers... but for me it is the dog in Inspector Gadget with antlers! Is he on a secret mission??"

I do believe Claudia is right here, folks. To the ordinary child, these may look like reindeers, but we seasoned Inspector Gadget fans know better. Brain, I'm sorry, but your cover has been blown...
Posted by Mesterius at 12:48:00 AM 1 comment: 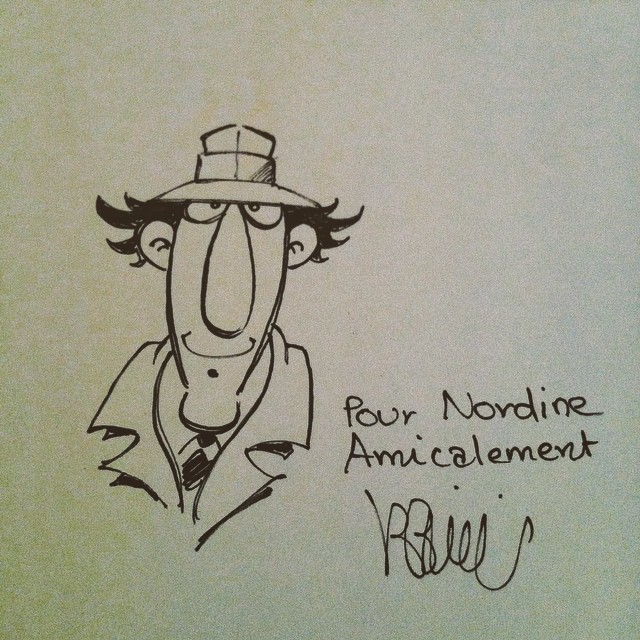 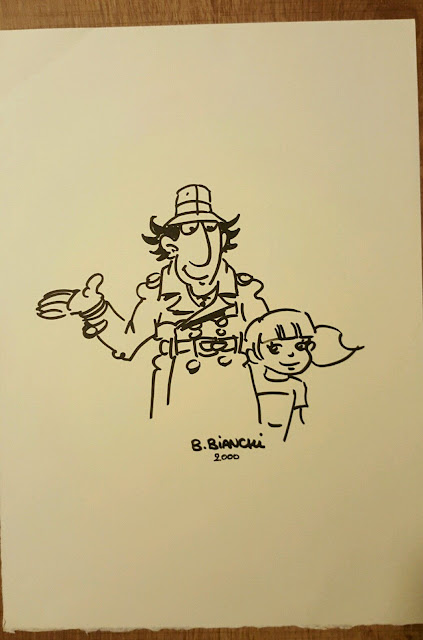 This drawing is very loose, but I love the style on both Penny and Gadget. As with several of the previously seen drawings, Bianchi's linework here has a certain flavor of the classic French-Belgian comic book style, which is fun for me to see. Gadget's character design quite clearly came from that tradition to begin with, and Penny, while rendered simpler than her animated design, is also instantly recognizable.
Posted by Mesterius at 2:58:00 PM No comments: