MAJOR NEWS: New TV Series In Production Thanks To the Success of the "M.A.D Dash" Video Game

I really haven't got much time to blog at the moment, but when you come across information like this, it's hard not to. You might argue that it isn't exactly "news", as the quotes I'm presenting here are almost three months old already; but for some reason, I only heard about this a little while ago. And extremely few web sites seem to have even mentioned it so far. Read on to get the full story... 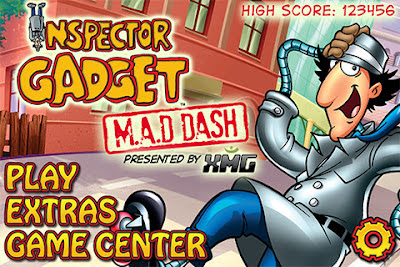 I've neglected to write much here about XMG Studios' hit mobile game Inspector Gadget: M.A.D Dash, mostly because I haven't yet had an opportunity to play it (I own neither an Iphone nor an Ipod Touch). But the previews and videos I've seen of the game generally look great, and its popularity has grown steadily since the release in December of 2010, easily making M.A.D Dash the most successful Inspector Gadget video game ever created. Still, the latest result of its success is something I would never have dreamt of.

A bit of context: Back in January, at the Mobile Games Forum 2012, XMG's CEO and co-founder Ray Sharma held a lecture about "transmedia" in the mobile game industry... using his Inspector Gadget: M.A.D Dash as an example of a mobile game that had successfully crossed over into non-game medias. Here's what Sharma had to say, according to a January 26 article by Jon Jordan of Pocket Gamer Biz:

In terms of XMG's history, when it released its Inspector Gadget iOS game in late 2010, and you could buy the ringtone and unlock the 10 most popular TV episodes too.

"We did 1 million downloads in a week, and it's reinvigorated the TV brand with a new TV series in production," Sharma revealed."

Yes, really. A mobile game has laid the groundwork for a new TV series. At first I thought this couldn't be true, but the Pocket Gamer Biz site seems genuine enough. Jordan repeats the fact in another article from January 30, again while on the subject of XMG's transmedia success:

"...its Inspector Gadget game was so successful that a new TV series has been commissioned."


Obviously hastily written, but let's ignore the misplaced quotation mark in "Gadget" and take a look at what these words seem to reveal. "Son of Inspector Gadget"? Is that possibly the title for this new TV series that Sharma mentions? The quotation marks in the post certainly seem to indicate it... and if that really is the case, then we can probably assume the following: This new TV series will not be a direct revival of the original series, but rather a continuation - canon or not - set years after the original.

The words "Son of" raise as many questions as they answer, though. Let's say, just for theory's sake, that this upcoming show will literally be about Inspector Gadget's son. Does that mean Gadget actually got married at some point? And got a family? Even more importantly, where do Penny and Brain fit into this picture... they're his family already, remember? Not to mention that I find it extremely hard to see how all of this will be pulled off convincingly. Sigh... part of me wishes that the new show's title could have been "Niece of Inspector Gadget" instead. That certainly sounds much more intriguing to me, as well as easier to fit into the show's established themes/universe.

On the other hand, I could be really jumping to conclusions here. The fourth source of information I came across is from a different source altogether, namely an article by Joost Rietweld on the site Gaming Business Review. Interestingly enough, it seems to slightly contradict the above Twitter post. Published on January 31, here's the relevant quote from Rietweld's piece, "Mobile Games Forum 2012: Industry Shows Signs of Maturing":

"...Sharma was looking ahead by exploring cross-media, or transmedia, strategies. XMG’s mobile game for the somewhat forgotten animated TV series ‘Inspector Gadget’ spun-off a range of side products including best-selling ringtones, up to the point where the game “reinvigorated the TV series”. Indeed, a new season of the series is currently in the making."


Interesting how Rietweld's statement appears to be saying that "the series" - as in "the original series" - will simply be getting a new season. I would love for this to really happen, but it's a bit hard to believe given that almost any revival of a creative property these days insists on changing around everything that made the property great to begin with.
However... there is one thing which sorta kinda supports the theory that the upcoming TV series MIGHT be a revival of the original series: That's what "M.A.D. Dash" is.

For those not familiar with the game, just take a look at the above gameplay video and you'll see what I mean. The design and animation instantly evoke the 1983 series. The game makers use original voice clips, sound effects with an authentic feel... even the theme music is there! (This might not seem like a big deal, but it is. M.A.D Dash marks the first time an Inspector Gadget game has used Shuki Levy's theme song since the late 80s, due to a monetary conflict that arose between DiC and Saban's company. Someone involved in this new game - at Cookie Jar or at XMG - apparently realized how extremely important that music is to the success of Inspector Gadget, and cleared the rights issue. Smart move.) In short, nearly everything about this game seems to cleverly bring back memories of the original TV show... and that accounts for a huge part of its popularity among older gamers.

This is the reason why the "Son of Inspector Gadget" title (true or not) doesn't quite make sense to me. The upcoming TV series is obviously being produced "on the back of the iOS game's success", right? And the game is based directly on the 1983 TV series. Why, then, would they follow up this game's success with a new TV show making a lot of changes to the original series? Wouldn't it, in fact, be logical to give viewers more of the original instead?

I don't know... I'm not gonna pretend I understand corporate logic. I do know, however, that I want more facts about this show! Information so far is pretty vague, with two of the above-mentioned sources even outright contradicting each other. And it's a bit strange that Cookie Jar - whom I at least presume is the production company behind this TV series - hasn't made any official announcements yet. Still, we don't know how far into production the show is... judging by Sharma's direct qoute, the only thing we know is that it IS somewhere in production. Let's hope it gets finished and released. Yes, the new show can wind up being both good and bad; but until we know more, I'm gonna remain enthusiastic about the fact that a new Gadget series is FINALLY being made! Think about it: For the first time ever, we're getting a reboot series without the involvement of DiC -  the company which almost ruined the franchise during the 90s and 2000s with their own, awful Gadget reboots. Cookie Jar has every chance of raising the bar, and I'm hoping they intend to do just that. Whether their new series proves to be a complete reimagining or a faithful recreation of the original... I want to see what they can do with Inspector Gadget.

But enough of my babbling. You've heard my theories and thoughts, now it's time to voice your own! What do you think?
Posted by Mesterius at 8:39:00 AM 12 comments: