Thought I'd post this Andy Heyward interview I found while browsing through my school library's archive of Animation Magazine. The text part of this interview has actually been online forever here, but I think it's nice to know exactly when/where the interview is from and to put it in proper context. First, the magazine cover... 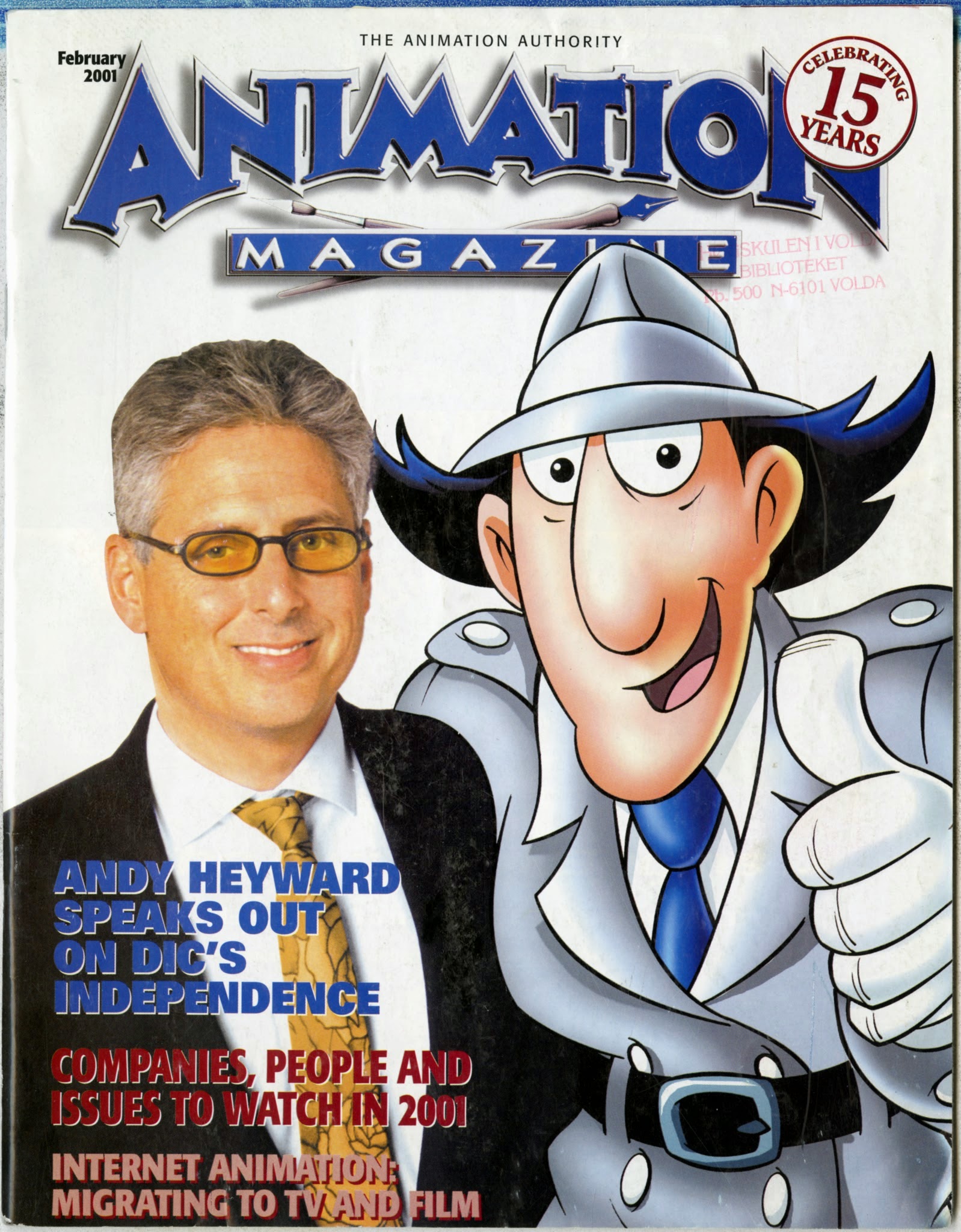 ...and now, for the interview. This was conducted right after DiC CEO (and Gadget co-creator) Andy Heyward had managed to buy back the assets of his animation studio from Disney, and was independent once more. (Not that this in any way would enhance the quality of the cartoons his studio did over the following eight years.) 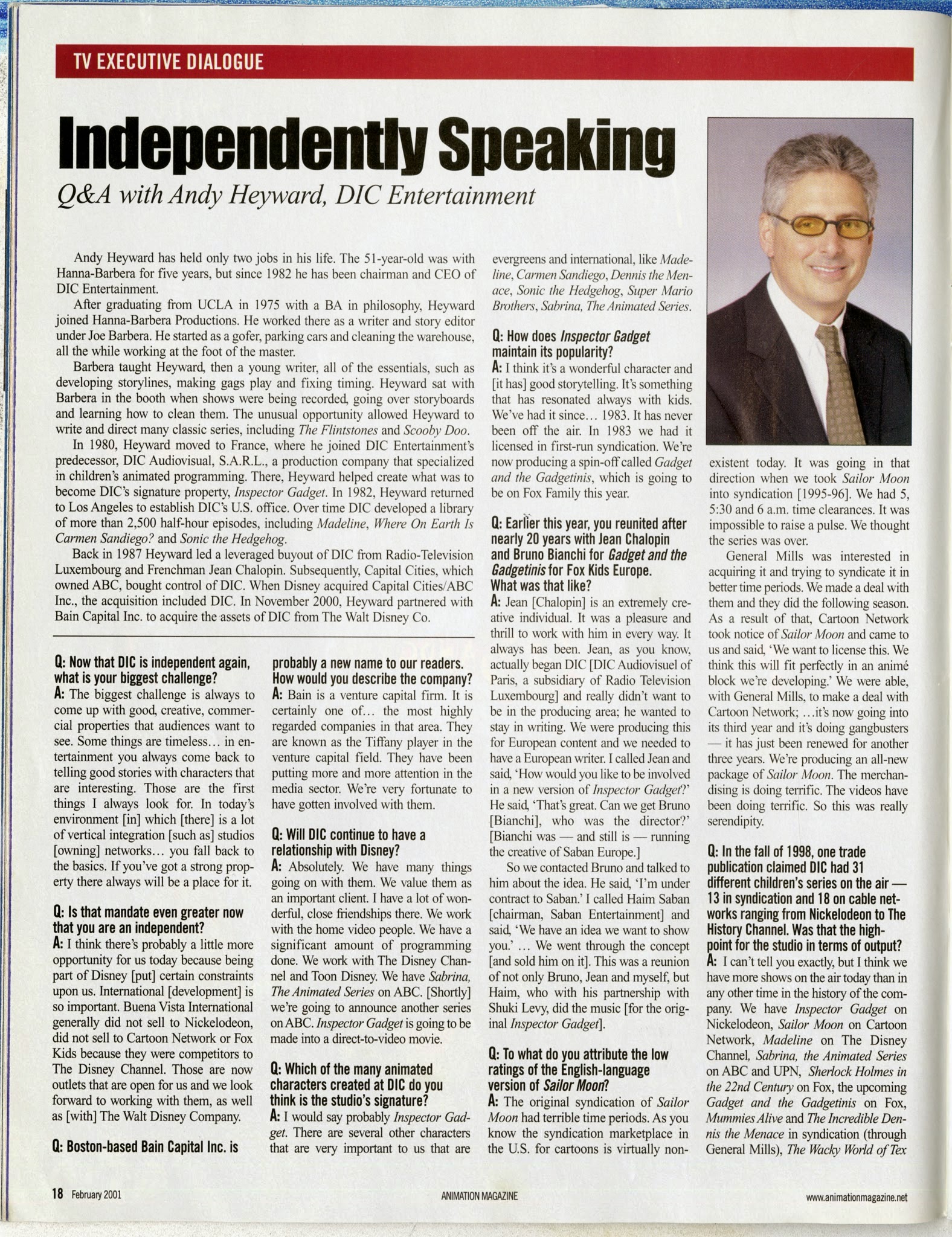 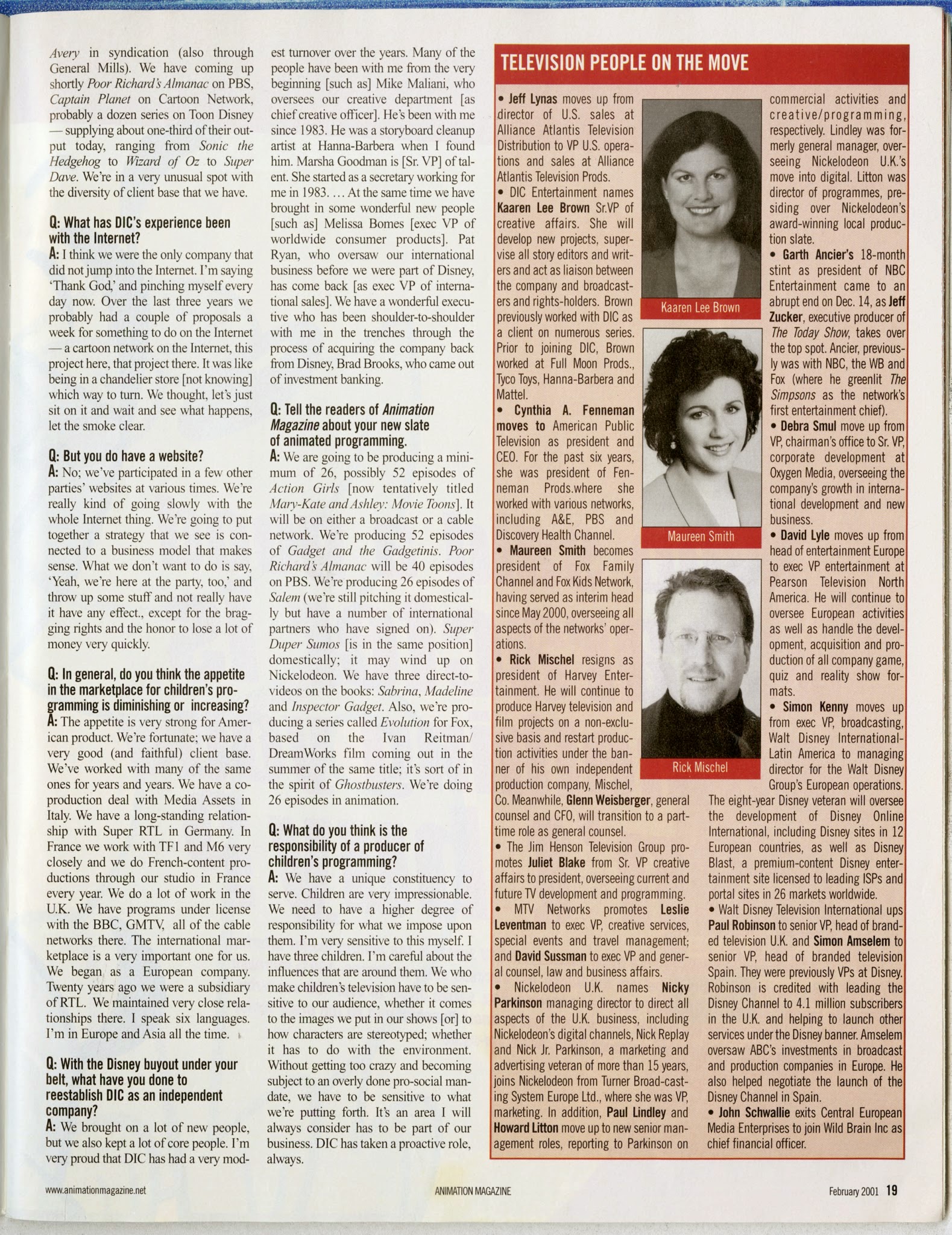 It's interesting to read Heyward's statements about Gadget & the Gadgetinis on the first page. Quite a few things changed from what he states here to when the finished series finally debuted. At the time, the plan was apparently to air the show on Fox Family in the United States, and Heyward even sounds confident that it will premiere sometimes in 2001. In actuality, Gadgetinis didn't finish in production until 2002, and did not air anywhere until the fall of 2002 - in France on the M6 channel from September 2002, in the UK on Channel 5 from August. The United States, meanwhile, never got to see the series at all.

Just for the record, Wikipedia is dead wrong about a number of these details. The episodes did not start aring on YTV in Canada in September of 2001, and Gadgetinis was not a Canadian co-production. While we're at it, the series wasn't produced over two seasons, either. It was a one-season, 52-episode order from the start. As Heyward mentions on the second page, "We're producing 52 episodes of Gadget and the Gadgetinis." But I digress.

Something I also find interesting is the bit about how Heyward ended up reuniting with fellow Gadget creators Jean Chalopin and Bruno Bianchi, as well as with music producer Haim Saban, to make the new spinoff series. I suspect that "Earlier this year" means "Earlier in 2000", by the way... the interview was probably conducted some time before the February 2001 issue was printed. [UPDATE: This Kidscreen article from December 1, 2000 confirms that DiC had already entered a co-production deal with Saban by then.]

Q: Earlier this year, you reunited after nearly 20 years with Jean Chalopin and Bruno Bianchi for Gadget and the Gadgetinis for Fox Kids Europe. What was that like?

A: Jean [Chalopin] is an extremely creative individual. It was a pleasure and a thrill to work with him in every way. It always has been. Jean, as you know, actually began DIC [DIC Audiovisuel of Paris, a subsidiary of Radio Television Luxembourg] and really didn't want to be in the producing area; he wanted to stay in writing. We were producing this for European content and we needed to have a European writer. I called Jean and asked, 'How would you like to be involved in a new version of Inspector Gadget?' He said, 'That's great. Can we get Bruno [Bianchi], who was the director?' [Bianchi was - and still is - running the creative of Saban Europe.]

So we contacted Bruno and talked to him about the idea. He said, 'I'm under contract to Saban.' I called Haim Saban [chairman, Saban Entertainment] and said, 'We have an idea we want to show you.' ... We went through the concept [and sold him on it]. This was a reunion of not only Bruno, Jean and myself, but Haim, who with his partnership with Shuki Levy, did the music [for the original Inspector Gadget].

This is the only interview where I've seen these happenstances explained, and it pretty much tells us why the series ended up being produced by Haim Saban's French animation studio, Saban International Paris (which would change its name to SIP Animation before the Gadgetinis series was finished). Even if I'm still no fan of Gadgetinis, I kinda like how the creators got back together for this project after so many years working at different companies. If only their new show had been as great as their original...
Posted by Mesterius at 1:07:00 AM 4 comments: