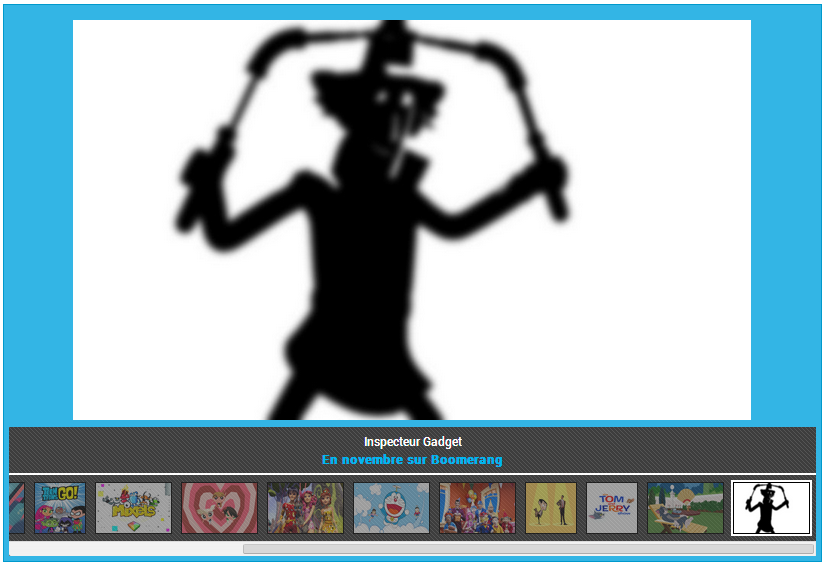 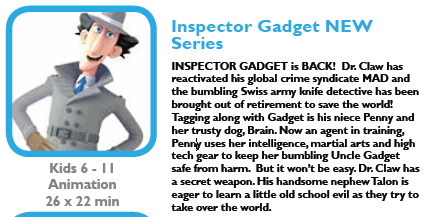 However -- in contrast to Turner's press release, DHX's March 17 catalogue states once more (on page 10, or double-spread 6): "New series to premiere in 2015!" So the two official sources are slightly contradicting each other about the premiere time. Then again, it might very well be that DHX's catalogue refers to the planned Canadian premiere on Teletoon. It has happened before that a show gets its world premiere in a different country than the one where it was commissioned and produced (just recently with The Tom and Jerry Show, which premiered on Teletoon Canada before it did so on Cartoon Network); and considering Gadget's evergreen popularity in France, I had half-way expected some broadcaster there to snatch up the new series as soon as it became available. If these proceedings go as scheduled, perhaps the world premiere of the reboot series will end up being on Boomerang France.
Posted by Mesterius at 10:14:00 PM 2 comments:

Incredible News: Inspector Gadget Fans Are Getting Their Due At Last [APRIL FOOLS]

UPDATE (April 3): Sorry, folks. This was all an April Fools' post. I thought I might as well state it outright here, since the date has now passed (and because more people than I had expected ended up believing it). If anyone has feedback or thoughts on this post, I'd appreciate hearing it in the comments section.

Also - dear DHX Media, La La Land Records, Michael Donovan, Michael Hirsh and Michael V. Gerhard (that's a lot of Michaels in one place): Please don't take this April Fools' post in the wrong way. It's simply wishful thinking from a very dedicated fan, who among other things thinks Inspector Gadget could have easily gotten better treatment on home video than Cinedigm gave it. As for the new series that the team at DHX Halifax is putting together, I'm excited to see it regardless of who you hire to compose or to play the voices (as long as they're good). All I want from the reboot is for it to be a great series. (That said, Frank Welker as Dr Claw would be incredibly cool.)

I have gotten wind of some very exciting news today, all sent to me via e-mail. They will be announced on their respective, official web sites in a few days, but I've been graciously allowed to share them here first:

News Flash Number One is somewhat related to last year's DVD release of the series, the "Inspector Gadget Megaset" from Cinedigm and Flatiron Film Company, which was also released as four separate volumes. I've neglected to cover this DVD release here on the blog so far (mostly due to lack of time), but Cinedigm's DVD editon has a LOT of problems - among them, audio dropouts throughout several episodes (the audio suddenly disappears for a few seconds, then pops back in); tracking problems at the bottom of the picture in many episodes; one safety tip missing from "Art Heist"; pixillated image quality in "Gadget Goes West"... just to mention a few of the set's amateurish technical issues. Happily, DHX Media is now well aware of Cinedigm's shameful DVD treatment of the series, which is why they e-mailed me today to say they are preparing to properly remedy the show's home video problems once and for all.

As we speak, DHX are in the process of remastering all 86 episodes from the original show in full, high definiton, slated for a collector's edition Blu-ray and DVD release early next year, to coincide with the debut of the new TV series on Teletoon Canada. As DHX's Chief Executive Officer Michael Donovan said in the press release they sent me (which will be posted on DHX's site in a day or two): "We're extremely happy to bring the classic Inspector Gadget series to HD, giving the Inspector's original adventures a new lease of life in the 21st century. As one of the most evergreen properties to emerge from television animation over the past 30 years, Gadget was really a no-brainer for high-def restoration. We're only sorry we haven't done this earlier. The restoration will be done to the highest standards possible - you've never seen the show like this before." While the remastering is not yet ready to be shown to the public, DHX sent along this publicity still from the episode "Snakin' All Over" as an indication of the expected picture quality. 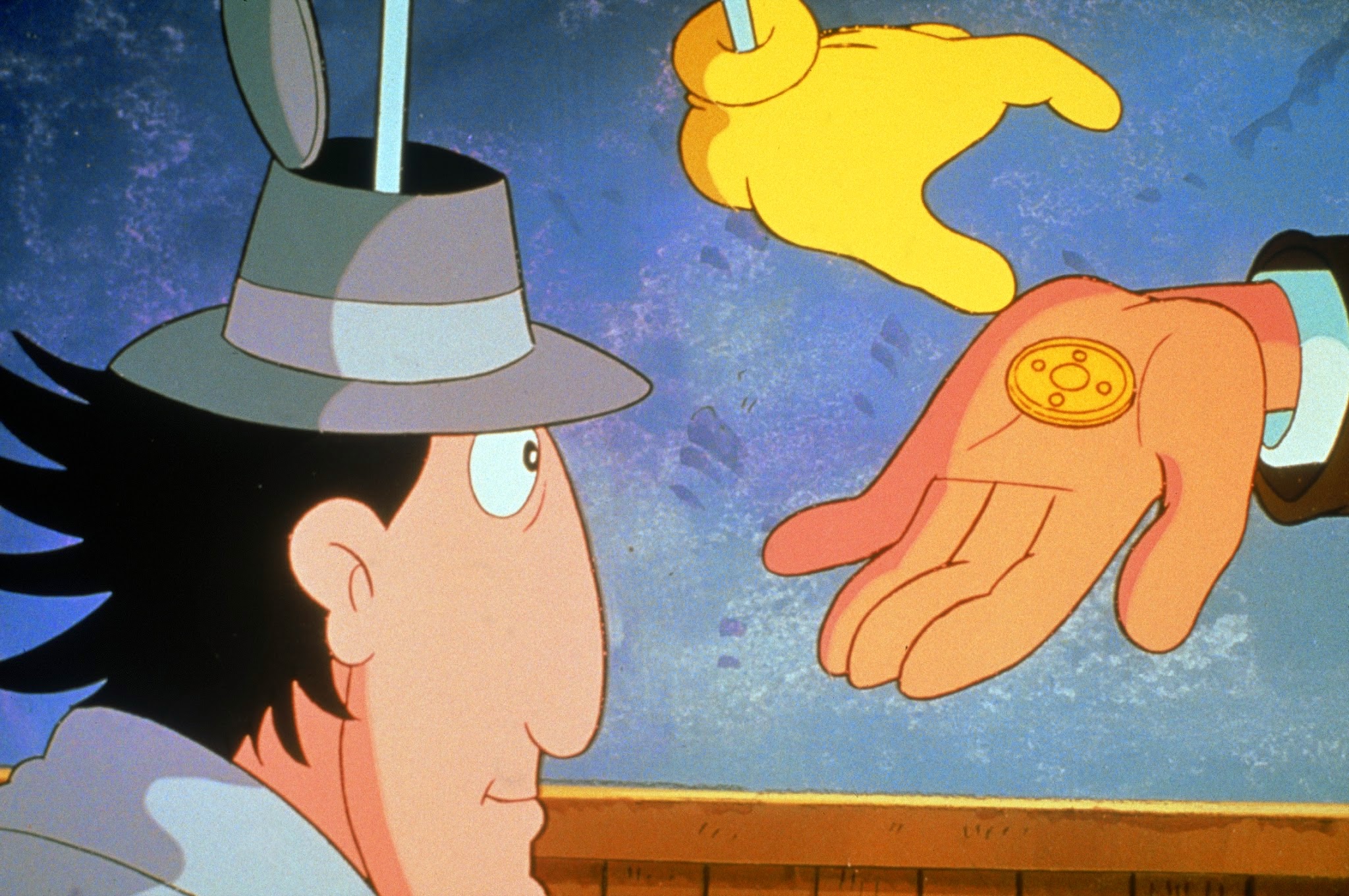 Tentatively planned special features include:
* "Behind The Gadgets" - this 2-hour documentary will delve deeply into the creation, development and production of the series. Including in-depth interviews with creators Jean Chalopin, Andy Heyward and the late Bruno Bianchi, writers Peter Sauder (season 1) and Eleanor Burian-Mohr (season 2), voice actors Frank Welker and Cree Summer and a handful of TMS's Japanese animation crew members, whose names are yet to be revealed.
* All 4 versions of the pilot episode "Winter Olympics" (Version 1 starring Jesse White; Version 2 starring Gary Owens; Version 3 starring Don Adams and Version 4, the syndicated Don Adams cut with the Frank Welker redub explaining Gadget's mustache).
* The original commercial bumpers for both the pilot episode and the standard series. Additionally, the episodes "Winter Olympics" and "Monster Lake" will both include an option to watch with or without the bumpers inserted.
* Audio commentaries for 10 hand-picked episodes by Jean Chalopin, Andy Heyward and Peter Sauder.
* "Original Production Art" - development sketches, model sheets and a selection of storyboards presented in full 1080p HD.
* "Original Pencil Animation" - pencil tests from the original series, presented in full 1080p HD from re-scanned pencil drawings. Including pencil animation from "Bermuda Triangle", "A Bad Altitude" and several other vintage episodes.
* "Brian Lemay's Character Designs" - season 1 designer Brian Lemay was the most prolific designer of secondary characters and props on the series. While we have seen many of Brian's great model sheets on his personal web site over the years, this exclusive featurette will be the most complete tour yet of his work. All model sheets presented in full 1080p HD, with video and audio commentaries by Mr. Lemay himself.
* "Composing For A Klutz" - legendary composer Shuki Levy talks at lenght about the sensibilities and inspirations he brought to the task of composing for Inspector Gadget. Levy also goes into detail about key compositions such as "Chocolate Factory" and "Mad Art Museum", and plays several of them in front of the camera.

News Flash Number Two. DHX's Executive Chairman Michael Hirsh, who famously co-produced season 1 of the original show, e-mailed me with another press release today containing some intriguing news about the upcoming reboot TV series. Most prominently, Shuki Levy has now been officially hired as the new show's composer. "We thought, with the original show's music being as great as it is, why reinvent the wheel? Wonderfully enough, Shuki Levy responded enthusiastically to our request. He is now excited to revisit one of his major works from the era of 80s television cartoons, updated ever so slightly for modern tastes."

The same reasoning, according to Hirsh, lies behind DHX's decision to hire Frank Welker to reprise his role as Dr Claw. "We briefly considered auditioning Brian Drummond, who was used by DiC in their various Gadget reboots from the 2000s; but the general opinion of the entire creative team at DHX was, he sucked. So we just had to go to Frank, the only voice actor who has truly portrayed Dr Claw convincingly over the years. He has started recording for us and is loving every minute of it. I'm thrilled to say Claw in our new series will sound just as gleefully evil as he did in the original, if not more so."

News Flash Number Three. Finally, La La Land Records wrote to inform me that the complete, missing master tapes for Shuki Levy's original score music have been found at last. La La Land is currently working towards releasing a fully remastered CD box set in the United States next year, including approximately 150 tracks. "This will be one of our major releases for 2015," comments La La Land co-founder Michael V. Gerhard. "Shuki Levy is an immensely gifted TV composer, responsible for so many catchy, memorable synth scores which have yet to be properly represented on CD. After bringing numerous famous animated scores to compact disc, including the likes of Batman: The Animated Series, Levy's incomparable Inspector Gadget soundtrack is a new high point for La La Land."

Well, those are the news I had to share with you today. I'd say all of these announcements were way overdue, but better late than never. Stay tuned to see the press releases on the sites of DHX and La La Land within the week.
Posted by Mesterius at 11:08:00 PM 11 comments: