"Does anyone have any Japanese-dubbed clips from Inspector Gadget?" You may be surprised, but talking with and observing fellow Gadget fans online over the years, I've seen this request pop up more than a little often. I find it a bit strange just how strong the interest is, considering that Inspector Gadget was not produced in Japanese language like DiC's earlier series Ulysses 31 and The Mysterious Cities of Gold. But this obviously holds a special fascination for many fans... so today, I'm gonna share the one and only Japanese-dubbed clip I've ever been able to hunt down. Click play to hear Penny and Gadget discuss ladder safety in Japanese...

As you might notice, this is the safety tip from the season 2 episode "Gadget and Old Lace". The original English version can be seen here. Notably, it's followed by a version of the season 2 outro where all written credits have been omitted (!). Makes you wonder – was it really that controversial to show English-language credits for a cartoon on Japanese television? Or did the broadcaster intend to translate the credits, but didn't get around to it? Or both? (Then again, both the outro song and Dr Claw's spoken line is in English, so it's still extremely obvious that this is not a Japanese series.)

Funny thing, by the way: in the comments to one of my old YouTube videos, I actually said almost four years ago to OriginalAkivara that the existence of a Japanese dub "would be news to me". I had apparently completely forgotten about this little clip, which I later rediscovered in my file collection. The clip was originally uploaded to YouTube around six to seven years ago by the user ohitea5963, under the title "ガジェット警部 エンディング" (literally translated: "Inspector Gadget ED"). It has also been up since September 28, 2009 on nicovideo.jp. I first assumed this was the source for ohitea5963's YouTube upload, but since the video description there says "YouTube import", it appears the opposite is the case.

And here's another funny thing. Remember how – before Season 2 was released to DVD – the only place for most of us non-US Gadget fans to watch the second-season episodes was an old torrent with a mixture of TV and VHS rips? Well, a few of the VHS-ripped Season 2 episodes in that torrent were missing their safety tips – and that included "Gadget and Old Lace". So when I first found this Japanese clip on YouTube way back in '09, I had to check a French DVD rip of "Old Lace" on Dailymotion to confirm that this was indeed the safety tip for that particular episode. All I knew was that the scene was nowhere to be found in the English-language AVIs floating around.

Consider that for a moment. During that brief period in time, the safety tip from the Inspector Gadget episode "Gadget and Old Lace" was MORE easily available to watch in Japanese language than in English. Doesn't get much more absurd than that.

So why exactly is the Japanese dub interesting? Again, I'm not really sure. The Japanese dub has nothing to do with the original production of the Inspector Gadget series. Gadget was an outsourced production, with the characters' lipsync animated to the pre-recorded, English-language voices. Furthermore, from what little I've been able to find out, the show was only dubbed to Japanese many years after the actual production took place. I hate to use Wikipedia as a source, but the Japanese Wiki page for Inspector Gadget – "ガジェット警部", a.k.a. "Gajetto Keibu", as the series is apparently titled in Japanese – is one of the few sources of info I've been able to find at all. So here's what it has to say on the broadcast in Japan:


In English, with the "help" of Google Translate:

In satellite animation theater of frame of the NHK satellite second television in Japan, broadcast the first 26 episodes between August 15 and September 14, 1990. From April 7, 1994 to March 21, 1996, all 65 episodes are broadcast, and in addition, also the rest of the story the number of re-broadcast from.


BOY, is that grammar awful. I'd VERY much appreciate a better translation here, if any of my readers knows Japanese. But the point should be clear: Provided that the Japanese Wikipedia is correct, Inspector Gadget did not air in Japan before 1990. (Additionally, if you use Google Translate on this 2006 forum thread, you'll see Japanese commenters wax nostalgically about the time when Gadget aired on the NHK channel.)

Wikipedia also lists the following Japanese voice actors. Perhaps these are the voices we hear for Gadget and Penny in the above video:


ANYWAY. Considering Inspector Gadget's close production links to Japan – and the many anime connections to be found in its animation – I guess I can understand, to an extent, the longings of some fans to watch the show in Japanese. Many Inspector Gadget episodes FEEL so much like anime visually that I can sorta relate to the desire to also hear the characters speak with Japanese voices. Sorta. If this is your cup of tea, I sincerely hope you enjoyed it!

I'll end with a li'l snapshot from Maroin Eluasti and Nordine Zemrak's DiC history book, "Les séries de notre enfance": a sales brochure used to market the series in Japan. A small caption in the book reads, "Plaquette pour la vente de la série aux chaînes japonaises", which means, "Brochure for the sale of the series to Japanese TV". So perhaps this was used to sell "Gajetto Keibu" to the NHK satellite channel...? 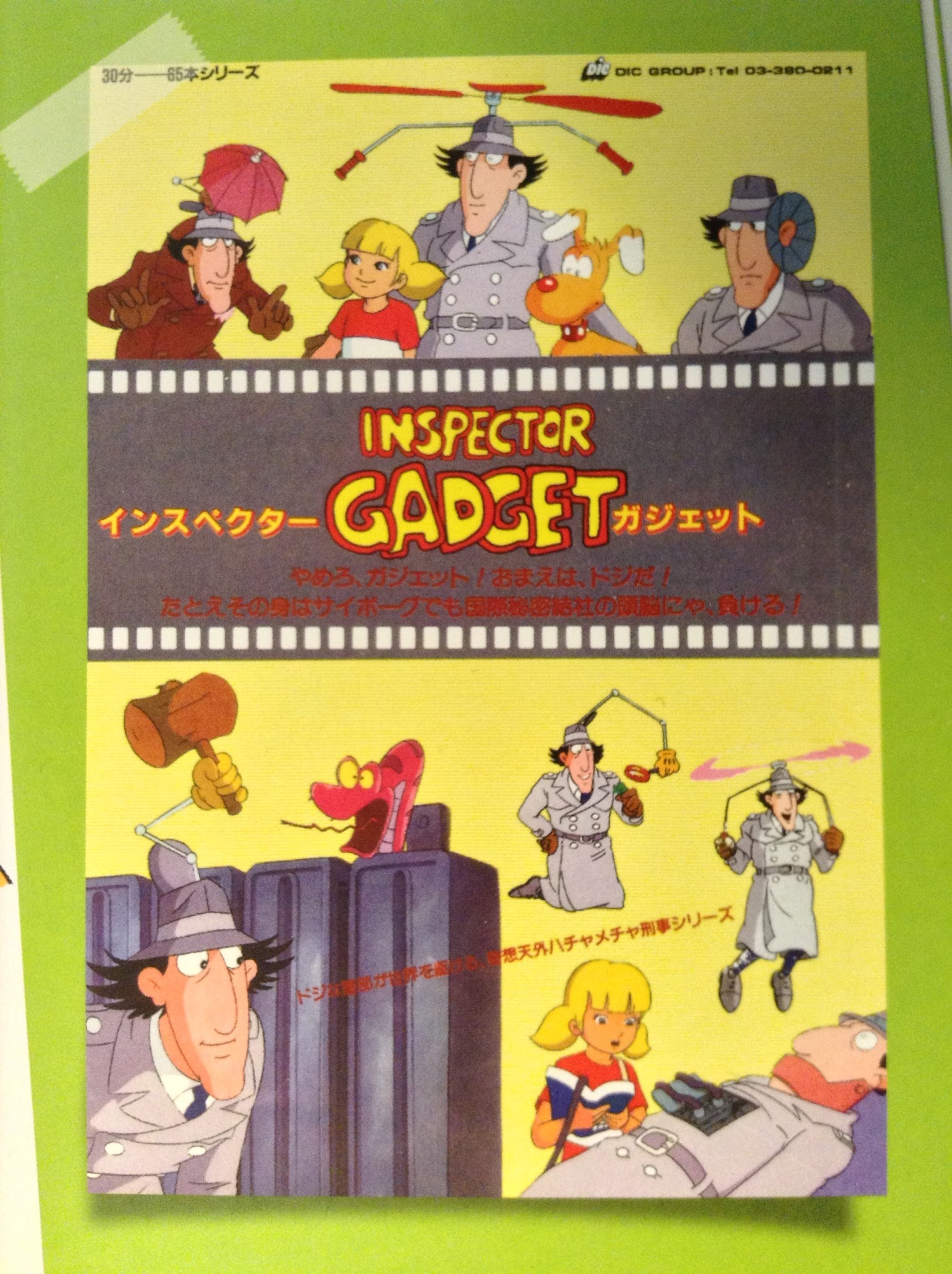