The Canadian animation festival TAAFI  – short for Toronto Animation Arts Festival International – is taking place this weekend in Toronto. In its schedule for Sunday, April 24, a rather interesting-sounding feature is listed among the "Studio Sessions". Can you find it? Have a look at this snapshot from the PDF schedule: 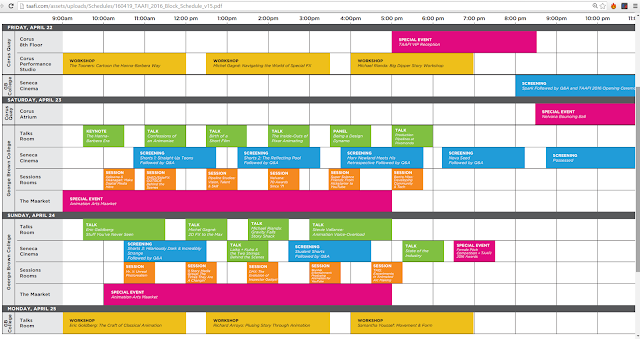 Maybe a closeup is in order...

"DHX: The Evolution of Inspector Gadget" will be held in a session room at the George Brown College at 1:30 pm tomorrow, the Sunday that is April 24. Unlike many other events in the TAAFI festival's schedule, this session doesn't have its own presentation on the web site – but it's not very diffcult to guess what it will be about: the changes DHX brought to Inspector Gadget in the process of making their new and updated reboot television show. Maybe some video footage of this will pop up on the web later.
Posted by Mesterius at 9:19:00 PM